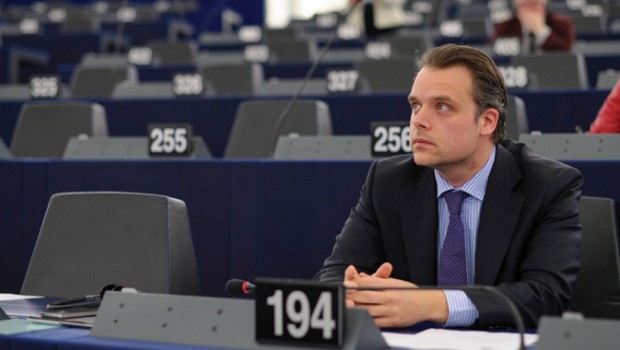 A stronger Europe can only be achieved through more integration and more co-operation between member states. This is the vision of Philippe de Backer, Belgian MEP for ALDE.

Europe will first need to climb out of the crisis and to do so, it needs to become less inward-looking: “We should think about a strategy to attract people that want to make an economic contribution.”

The rise of Eurosceptic parties seems to indicate that an increasing part of the electorate is not ready for more European integration. How could ALDE better convey the benefits of a stronger Europe to citizens?

We put forward a strong pro-Europe programme, because we really believe that more European integration is necessary.

The voice of Eurosceptic parties consists of two elements. Firstly, there is an element of nationalism and protectionism, especially on the right with people like Le Pen and Farage who would like to hide behind their national borders. This is the worst thing you can do in a globalising world; you will always lose this battle in the long run.

On the other hand, I have also sensed that some people expected more from Europe and were disappointed because certain issues have not been resolved. They wonder why Europe has not succeeded in dealing with the financial crisis, proposing a future-oriented budget or drawing up a convincing energy policy.

The increase in Eurosceptic parties will not make it easier, but a more integrated Europe in the areas of the internal market, transport, energy, financial services and the digital economy is utterly important.

Europe will have to take that step to solve a few of its biggest problems.

You have been an MEP and a member of the Committee on Economic and Monetary Affairs since 2011. What is, according to you, the way to generate economic growth?

There are several things that need to happen and they will have to be achieved through co-operation between member states, because Europe cannot do everything on its own.

First of all, there are still too many European barriers to entrepreneurship. The internal market is by no means finished; this project is already taking fifteen years to complete and many countries still need to correctly implement legislation. This needs to be resolved soon.

Another aspect that will prove to be important in the near future is getting capital markets to function in a better way. We need companies to invest in order to create growth and jobs, but they have to be able to receive financing.

To make this possible, we do not need more legislation but rather a re-evaluation of existing laws to see if there are ways to make it easier for companies to get credit. In other words, we will need to grease the wheels of the system.

In addition, Europe will have to strengthen its position in the world. We need to make sure that free trade agreements remove non-tariff barriers to further the export of our goods. This would be a huge advantage to both big companies and SMEs.

All of this will demand a lot of co-ordination between European and national policy levels, but most of all it requires political courage to take that leap.

Youth unemployment is still a big problem in Europe. In what way could a stronger Europe help young people?

Twenty to thirty years ago, young people were forced to look for a job in their own countries and if there were not any, they were stuck.

Today it is a bit easier for people to search for a job outside their native countries, but there are still many obstacles. Some countries, for example, do not recognise diplomas and professional qualifications obtained in another member state.

As a consequence, people are condemned to be unemployed in their own countries despite that they could have taken up a job in their field in another European country.

Then there are also people who are hesitant to leave their country because they are not sure what will happen to their social rights and pensions. In this regard, European policy makers should guarantee that people can count on the same social rights in another member state and make regulations in this area more transparent.

If necessary, Europe should create a fund to support people in this process. European labour mobility has to be encouraged.

Moreover, if Europe strengthens its economy, then this will automatically lead to more growth, more jobs, and less youth unemployment.

In the US, a lot of big companies have been founded by entrepreneurs with a migrant background. What kind of environment does Europe have to create to encourage these people to start a business?

Entrepreneurs with a migrant background are extremely important because they bring progressive optimism and they are frequently instrumental in creating links with markets outside Europe.

This could facilitate the move to a truly international environment. This is exactly what we need: companies that are not merely focusing on their own backyard, but instead look beyond national borders and consider the world as one big market.

But first of all, we need to keep working on Europe’s competitiveness and attractiveness because people do not want to invest in an economically bad situation, or at least considerably less.

You also need to make a distinction between asylum and migration. Regarding asylum policy, I think that Europe should always offer sanctuary to people who have been persecuted for whatever reason in their own countries.

In the case of migration, we need a more intelligent strategy. We are presently still too much ’Fortress Europe’ and too inward-looking. We have to be more open to the outside world.

We should think about a way to attract people that want to make an economic contribution and draw up a European strategy accordingly.

The European Parliament has always supported the nomination of the so-called Spitzenkandidaten. How likely is it that one of these candidates will become the next head of the Commission? Would Juncker be a good choice?

I am a liberal, so Juncker would clearly not be my first choice. My first choice is Guy Verhofstadt but you have to respect the rules of democracy, which means that the biggest political group should have the first opportunity to put forward a candidate.

We will make a decision about Juncker based on his proposal. The Parliament is the institution that has to approve the European Commission’s policy agenda; the European Council is not the body that proposes this agenda.

It is very important to remember this because the Council is playing games at the moment. It is trying to change the procedure and I think that this is the wrong way to go about.

This suggests that the Council is not ready to take the next step toward European democracy. You cannot first tell people that they can vote on the next president of the Commission and afterwards say: ‘Just kidding, we are going in a different direction.’ It would be a fundamental mistake to deviate from this procedure now.

I hope the Council will come to its senses and accept the procedure by giving Juncker the first chance to secure a majority in both the Council and the Parliament.

Share the post "“Europe needs to be more open to the outside world.” Interview with MEP Philippe de Backer"

SMEs
The category of micro, small and medium-sized enterprises (SMEs) is made up of enterprises which employ fewer than 250 persons and which have an annual turnover not exceeding 50 million euro, and/or an annual balance sheet total not exceeding 43 million euro.
Spitzenkandidaten
leading candidate(s)
ALDE
Group of the Alliance of Liberals and Democrats for Europe
MEP
Member of the European Parliament. The MEPs are your representatives at the EU level. They adopt EU legislations and the budget. You elect them for a period of 5 years. The next election is in May 2014.
Internal Market
The geographical area across the EU where you are free to live, work, study, do business or retire… Thanks to this single market, you can also enjoy, from home, a wide variety of goods and services coming from all over Europe.
Entrepreneurship (Entrepreneur)
A person who operates a business and takes on many risks to do so. Entrepreneurs are also innovators, coming up with new ideas and interesting solutions. New companies create more than 4 million new jobs in Europe every year.