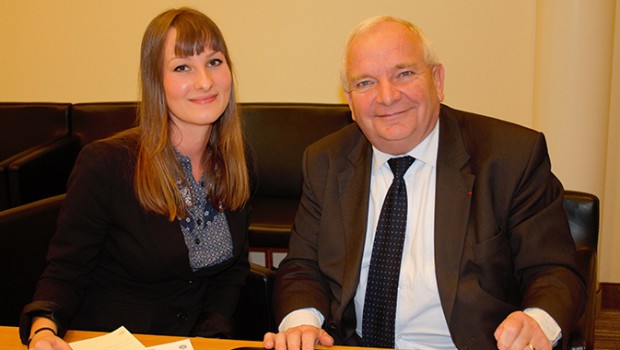 What are the EPP’s main positions in the upcoming European elections?

We are now finally starting to see the results of the very tough measures that have been implemented in many European countries, especially those governed by the EPP.

If we compare the countries where the EPP is governing, with those that are being governed by the Socialists, France for example, we can see a significant and clear difference.

So the first argument is: the EPP stands for sound finances in order to achieve solid growth. This needs courage, but it works. In the past, Europe has been spending money it did not have; we have to work on reducing our debt now. We also lost our competitiveness; our policies now aim at making Europe become competitive again.

How can the EPP position itself against the rising extremist parties?

Concerning the extremists. I cannot think of any country where they have actually succeeded.

Many people vote for the extremists as a sort of protest, to warn and even punish the centre parties.  But look at Marine Le Pen for example. What has she achieved? She has lost the 2 or 3 cities that she had won in the previous elections, right away.

We must take the lead and show that what we have implemented bears fruit. As Balkenende, the former Dutch Prime Minister, said this morning, we now need a vision for the next 10 years.  Our campaign has to highlight the fact that we have a plan, an idea, and a vision.

We should not talk about less Europe, like Farage & co. But about more Europe. More Europe for more solutions.

If we can successfully transmit this message, the extremist parties can do whatever they want. I will not worry about them; I am not scare of them. During all of my political life, I have never worried about the others but tried to focus on my own politics instead.

I have to insist on this: if we run after the extremists, we will lose the voter base. I start from a solid foundation: this is what we have done. We still have a long way to go and work hard on reducing debt but today we can already see first positive results of our policies. Look at the return of economic growth in Greece. In Portugal, unemployment is falling, Spain is welcoming back investors. These are the achievements of the EPP group.

How can we encourage people to go and vote and be more active in the upcoming elections?

To be honest, I am asking myself the same question.

We are trying. But it is difficult. Until now, the extremist did not or just rarely participate in the European elections. They will now profit from the crisis and the question is: will the people go and vote? I can only tell you the answer after the 25th May.

Our goal should not be to copy what the others do, but instead to mobilise our own people to go and vote. To do so, we need a good candidate, who has great analytical skills and is able to identify where things went wrong, where things went well, and can come up with a plan on how to deal with these issues, for example youth unemployment.

Competitiveness is very important for Europe. Small and medium sized businesses (SMEs) are the driver of innovation and the backbone of the European economy. How can we support them even better?

You are completely right, and we really have to address this issue quickly, if we want to regain jobs.

If I take the example of my region Alsace, I count the number of unemployed people and the number of SMEs: a job for each enterprise and the unemployment problem is solved.

Of course, it is a bit more complicated than that. But SMEs can be a key element in quickly solving a part of the unemployment problem. Therefore, we need to create an environment where SMEs can flourish. We should not burden them with taxation and red tape.

We need a social and tax harmonisation at the European level. This is required if we want a common currency and if we want to avoid the current situation. For example, the coming minimum wage in Germany is a right step into this direction.

Share the post "“I am Not Scared of the Extreme Right.” An Interview with Joseph Daul, Chairman of the EPP Group"