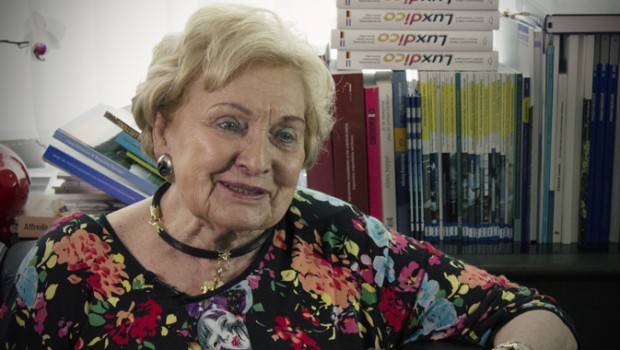 Giving way to a younger candidate, we will not see her again as an MEP after the elections, but as an expert in her current committees: “Economic and Monetary Affairs”, “Committee on Agriculture and Rural Development” and “Women’s Rights and Gender Equality”.

In this interview, she gives us her vision of Europe and addresses the issues of gender equality, youth unemployment and entrepreneurship.

This is your last term in the European Parliament. Will you leave the Parliament with the same beliefs and the same vision of Europe as the ones you had 1965?

When I started as an MEP in 1965, our main objective was to build a Europe of peace and prosperity to avoid a Third World War. I experienced the Second World War and lost two brothers. This is why I am still as committed to European integration as I was at the age of 20.

But I am very worried about the composition of the next European Parliament. When I started in 1965, MEPs were much more enthusiastic and committed to Europe. Today, there are many Eurosceptics, who do not understand anything because they take everything for granted, especially the young MEPs. They think Europe has fallen down from the sky. The free movement of persons, labour, goods, services, capital, it all has been built gradually. It did not fall from the sky!

The same goes for the euro. If we had not had the euro, especially during the financial crisis, we would be much worse off today.

Can you briefly explain how the powers of the European Parliament have increased?

Initially, the European Parliament did not have much power. The decisions were taken by the Council of Ministers. Today, we are co-legislators.

But I have to say that when the European Parliament had fewer competences and was not directly elected, the quality of its members was much better. In that time, MEPs had to be national deputy or senator to be elected.

You are a Member of the Committee on Women’s Rights and Gender Equality. When you first entered the European Parliament, you were one of only two women among the 143 members. Today, women account for nearly 40% of Parliament. According to you, is gender equality, whether in the political or private sphere, steadily increasing in Europe?

Europe has done a lot to enhance equal treatment and opportunities between women and men. Without Europe, we would not be where we are now. Since 1975, we have passed European directives for equal pay, social security, maternity protection, access to employment, career development, parental leave…

The problem today is that the Committee on Women’s Rights and Gender Equality asks for too much and, consequently, the Council of Ministers has, for example, never started to work on the issue of maternity protection.

Are you in favour or against quotas?

I am generally not in favour of quotas, except in politics. I did not back up the quota policy designed by Commissioner Reding because this will only impact between 15,000 or 20,000 women who will be parachuted into the boards of listed companies.

I prepared an alternative to her directive with 90 amendments that would have compelled all enterprises to take positive actions to promote women. It would have concerned millions of women.

What should Europe do to fight against youth unemployment?

Member states must ensure the competitiveness of enterprises. If you do not have competitive businesses, you cannot create jobs!

The situation in Luxembourg shows that it is difficult to solve the unemployment problem. Since 2008, we have created about 40,000 jobs and we still have 20,000 unemployed people, because residents are not sufficiently trained or do not take the available job places. Why are we not able to train them?

I have the political courage to say it. Most men and women politicians in Luxembourg do not have that courage. Since most voters from the national parliament are civil servants, you could lose the elections if you tell the truth.

UNITEE represents New European entrepreneurs and business professionals, that is, individuals who live and work in Europe while having cultural and linguistic ties with a third country. Do you think that Europe makes full use of the potential offered by these New Europeans?

Without foreign workers, Luxembourg would be a poor country.

Luxembourg has a lot of foreign entrepreneurs and heads of companies as Luxembourgers rather work in public service. These entrepreneurs are perfectly integrated into associations such as the Federation of Industry, the Association of Banks and Bankers, the Chambers of Commerce…

It does not matter whether you are a native or a foreigner. They have opportunities to integrate.

What would you like to say to our members to encourage them to use their ballot in the Europeans elections?

When you have the right to vote, go vote! The composition of the European Parliament for the next term is important because MEPs are co-legislators, so they have a huge influence.

And this is why we need a majority of reasonable, competent and diligent MEPs able to produce legislation that is applicable.

We have more and more Eurosceptics, which is very dangerous for the European Union.

We must vote for people who are able to be good and reasonable legislators. It is also in the interest of entrepreneurs.

Share the post "“I am worried about the composition of the next EU Parliament.”, Interview with Astrid Lulling MEP"