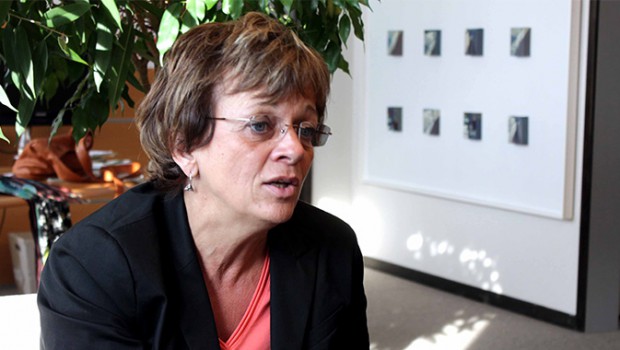 How can we achieve a people-based Europe, centred on its citizens, sustainable and inclusive? Find out more about the positions of Isabelle Durant*, MEP and of the Greens in this article.

Towards a citizens’ Europe

In September 2013, you published a book co-authored with Gesine Schwan and titled “HYMN TO AN INSUBORDINATE EUROPE – Citizens on the move”. You are thus for a Europe that fosters citizen participation?

Absolutely. I think that today’s Europe has come to a standstill. European citizens are discouraged by the crisis and the resulting austerity measures. And I don’t believe that we can bring them closer to the European project solely via the institutions – the Parliament, the Commission – or even via a charismatic leader. On the contrary, we need to rebuild confidence in the European project from below, by focusing on those who, every day, create Europe’s strength, in the world of business, in civil society…

Do you think that organisations such as UNITEE and its member federations and associations have a role to play in fostering this citizens’ Europe?

I strongly believe in the great power of associations, and probably even more, of migrant associations. Why? Because migrant associations are usually dynamic. Having a multiple identity, being able to speak several languages, understanding several cultures, including non- European cultures – especially in countries close to us such as Turkey- are great assets. I am counting a lot on the members of your association.

However, I sometimes feel that they are living in a vacuum, while their dynamism should be shared. What would be great, for example, is that New Europeans open their businesses to young unemployed from Belgium, Germany etc. This would be a fair reciprocity.

Towards a sustainable Europe

How are the Greens organised at the European level?

It is a very cohesive political group, which works a lot collectively in order to find a common position. This is not the case in many other groups, which are bigger, but not consistent: their votes are unpredictable and very often dictated by national interests. The Greens are the 4th political group but weigh much heavier thanks to its coherence.

Towards an inclusive Europe

Working towards a citizens’ Europe and a more sustainable Europe also means to foster a more inclusive Europe, which ensures that all its citizens contribute to growth but also reap the benefits.

What are the Greens’ recommendations to increase the employment rate among young Europeans?

First, proposing internships is not good enough. Young people do not deserve to be treated that way! We should work hard towards the development of sustainable and quality jobs. To promote the mobility of young people is also of paramount importance. The European project takes on its full meaning here: it allows young people to move easily within Europe. But this also means not only helping the young people to find a job, but also creating jobs. This can be done by supporting SMEs, innovation and by enabling the young people to take risks, borrow from the bank, and initiate projects. Many young individuals are ready to take on this challenge. But they must be given the necessary resources.

There is currently an under-representation of women in companies’ top positions. Are you in favour of quotas?

Yes. In businesses, in politics and elsewhere in society. If companies are not obliged to go and look for the women, they won’t do it. Don’t tell me that we are not equipped with the right skills to do it! Women are here and the quotas will help them to be fully part of the labour market.

There are two aspects. The humanitarian aspect of course. And I cannot remain silent about the Syrian crisis. People are sheltered in dismal conditions in countries surrounding Syria, while Europe just watches. The European Union must be ready to do its bits.

Overall, immigration has always existed, and will continue to exist and will actually increase in the future. It is the middle class that migrates. These people are an opportunity for us. But we must give them the possibility to go back to their country of origin. One should have the possibility to go back and forth, to work for some time in Europe, sustain its family and go back. This circular migration is a much more promising approach than the one that is envisaged by some people at the European people: “we are going to steal the smartest brains where we need them, when we need them”. The Greens are for a circular, open migration.

And last, what is your message to encourage our members to vote in the 2014 European elections?

I invite them to vote, but also to follow the activities of their elected representatives. It is a good collective exercise for the members of your associations.  It will help to uncover the double-speak. When you start to monitor and question your MEPs, to put pressure on them, you realize how much power you actually have. Hold your representatives into account! We have to accept to be put under pressure. I thus ask them to be very attentive to what we do and say!

*Minister for Transport and Mobility in Belgium from 1999 to 2003, Isabelle Durant serves as a Member of the European Parliament (MEP) for the Green political group since 2007 and is also Vice-President of the European Parliament. A qualified nurse, she worked for 15 years in technical and vocational education in disadvantaged districts of Brussels. Her professional background allows her “not to lose track of reality”.

Share the post "“I Believe In The Great Power Of Migrant Associations.” Opinions Of MEP Isabelle Durant"