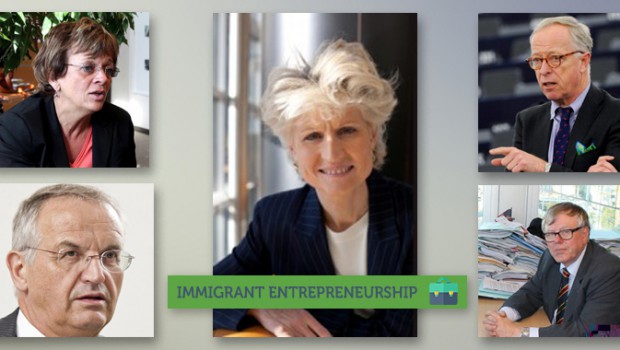 The number of immigrant entrepreneurs in Europe is growing and in many European countries the self-employment rate among immigrants is considerably higher than among natives. Immigrants in Europe, or New Europeans, have clearly demonstrated that they make a substantial contribution to European economies and this has not gone unnoticed.

Several MEPs have told UNITEE about the vital importance of the entrepreneurial spirit of New Europeans. For our theme week on immigrant entrepreneurship, UNITEE made a selection of the best quotes of MEPs regarding this topic.

“New Europeans entrepreneurs can play a huge role. Knowledge of languages and cultures can open doors to Europe’s neighbouring markets, which are important to the vast majority of European companies.”

“I never put people with a migrant background aside. They really are the best of the best. Most of them really want to work, have strong family relations, and are more than equipped to start their own company.”

“New European entrepreneurs represent a real potential, in economic terms but also in terms of dynamism. They had no choice but to be active, to do something, and they are very motivated. Their double or triple identity makes them stronger and more open to the world.”

Olle SCHMIDT, Swedish MEP for the Alliance of Liberals and Democrats for Europe:

“We have a lot of proof and we all know that Europe without migrants would have been a much less influential continent. The potential of immigrant entrepreneurs, for example, has been enormously important in the creation of new ideas and new jobs.”

“I think that we have to start looking at New Europeans not as part of the problem but as part of the solution. We have to change the picture: we should no longer consider them as a burden but as an asset. We need to recognise that we need migrants to sustain our economies. These people have come to our countries to enrich us.”