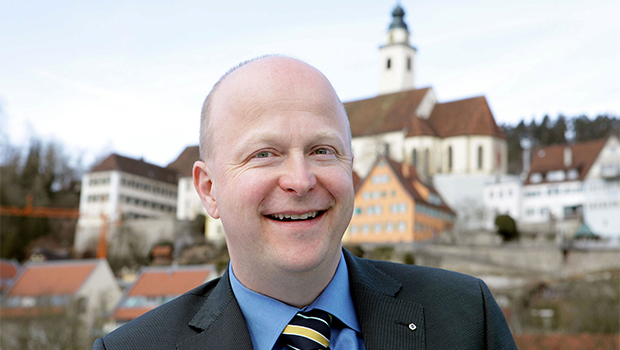 Can you tell me why you have decided to go into politics?

As a young man, I understood that a liberal democracy lives of the personal commitment of the individual. It requires the involvement of citizens. Being an active member of the evangelical youth, working for peace and for asylum seekers were just as important to me as the problem of unemployment.

The liberal idea has convinced me back then and still does to this day: to have as much freedom as possible and as little government intervention as necessary. Freedom and responsibility go together. This also convinced the citizens of my hometown, Horb am Neckar. In 1994, they elected me as their mayor. I was only 27 years old at that time: the then youngest mayor in Germany!

We built the city on the basis of civic engagement and personal initiatives. The results are still visible today: the citizens rescued its UN heritage convent, built a youth centre and funded schools. The active promotion of trade and industry paid off and the number of jobs increased by 24 percent from 1998 to 2008.

At the same time I was always fascinated by Europe. The European integration project is essential for peace, prosperity and rule of law on our continent. As a local and national politician, I have also witnessed how much European legislation shapes our lives. Therefore, the move to European politics seemed like a logical step. Since 2009, I have been a passionate Member of the European Parliament. At the same time I remain committed to my region as a member of the City Council and County Council Horb on a local level.

What are the main priorities of your work in the next five years? What are the key activities of the Committee on Economic and Monetary Affairs in relation to SMEs?

The SME sector is the backbone of the European economy and is an engine for growth, innovation, employment and social integration. More than 20 million SMEs in the EU account for 99 percent of all businesses and provide two-thirds of all jobs in the private sector. Therefore, SMEs will remain at the heart of my work also in the upcoming legislative term.

For example, I remain Vice-Chairman of the SME Intergroup, where MEPs from all political colours work together to support SMEs.

Furthermore, in the Committee on Economic and Monetary Affairs, we will work against the credit crunch, which hurts especially the SME sector. We can only succeed in doing so if we restructure the banking sector and stabilize and complete the Banking Union, financial market reforms and monitor the implementation of the relevant laws. We must pay attention to the fair treatment of small and medium-sized banks. Cooperative banks and savings banks are particularly important for SMEs. I was appointed shadow rapporteur for the ALDE group, on the CRD IV and the review of the current framework of European economic governance. In addition, we have major challenges ahead of us in regard to the insurance sector or the role of the European Central Bank in overcoming the sovereign debt crisis.

What is this concept of the “Blue Growth”?

The preservation of living conditions and, consequently, also intergenerational equity are core liberal principles. Ecology and economy are not opposites. We want to achieve environmental protection by technology and progress.

The concept of the “Blue Growth”, whose name is derived from the sight of our blue planet from space, will give a contemporary, pragmatic and optimistic answer to some of the great questions of our time: How can we counteract the de-industrialization of Europe and at the same time save resources and protect the environment and climate? I am convinced that these challenges can be solved together.

In opposite to the Greens, the liberal policies do not rely on prohibitions such as the insane light bulbs ban that has now caused even more mercury in circulation, a “Veggie Day”, or specifications on biofuels, leading to monocultures and rainforest depletion. Instead, we want to encourage innovation and solutions. Reducing the consumption of plastic bags is a noble goal – but I am against a ban.

We already have European legislation on waste management and recycling – let us implement this first, and then promote research on the production and recycling of plastic – plastic bags are made from crude oil, a valuable resource! Ingenuity, entrepreneurship, research and advanced technology – these are Europe’s strengths, which we cherish and we need to build on instead of patronising people!

Innovation and R&D are key issues for Europe’s competitiveness. How can the EU support SMEs more in these fields?

Research and innovation can always flourish where inventiveness and entrepreneurship are not limited, but encouraged. Cutting red tape – ‘better regulation’ – are often used words at EU level for years now, but the implementation is supported by way too little emphasis.

We also need to focus on the implementation of ongoing programs such as COSME, the EU Structural Funds and Horizon 2020, aimed specifically at SMEs. The programmes provide in particular venture capital, low-interest loans and grants. Not only do we have to ensure that sufficient funds must be made ​​available from the EU budget each year, which unfortunately is not self-evident, but we also need sufficient information for SMEs on how they can access the funding. For this purpose, the ALDE has created its own funding guidelines you can access at http://www.michaeltheurer.eu/wp-media/2013/03/KMU_Guide_Michael-Theurer.pdf.

Were the austerity measures in Southern Europe good or bad for SMEs?

There was no alternative to austerity measured in the countries most affected by the sovereign debt crisis. A proper state bankruptcy of a country would have plunged even the SME sector into the abyss. You have to see the bigger picture: austerity measures as well as rescue programmes are accompanied by structural reforms that include labour market reforms, liberalisation of formerly public sectors and procurement. This benefits in particular SMEs.

In Greece and Spain many SMEs do not get loans. In Greece, there are almost no cooperative banks (only 2% market share), and virtually no savings banks. Therefore the ALDE has fought successfully, for loans for SMEs from the European Central Bank.

How do you assess the role of “New Europeans” in Europe and especially in Germany?

Germany ranks high among the classic immigration countries, with hundreds of thousands of people moving here annually. In terms of popularity, we rank just behind the United States. This would not be so if Germany would not be considered cosmopolitan and open minded. The vast majority of our fellow citizens with a migration background are well integrated and an asset to our country, our society and culture. In particular, those who are with us for several generations are successful business people today.

Recent migration flows result from the sometimes dramatically high unemployment rates, particularly in the southern “crisis countries” of the EU. Germany in turn is affected by skill shortages and an aging population. The shortage of skilled labour may amount to 1.4 million jobs in 2020, according to the German Chamber of Commerce.

Because of that, but also because the freedom of movement is a fundament of the EU, the Liberals will ensure that workers can move to another EU country without any problems, whether for work, for study or for training purposes. We are working actively on the legal framework for mutual recognition of qualifications. In this area we have to reduce regulatory barriers. The ALDE stands also for controlled immigration. We advocate for immigration quotas and to add two columns in the refugee policy: helping people to help themselves in their countries of origin as well as an enhanced EU border protection, by combating smuggling gangs and through coordinated assistance to the shipwrecked.