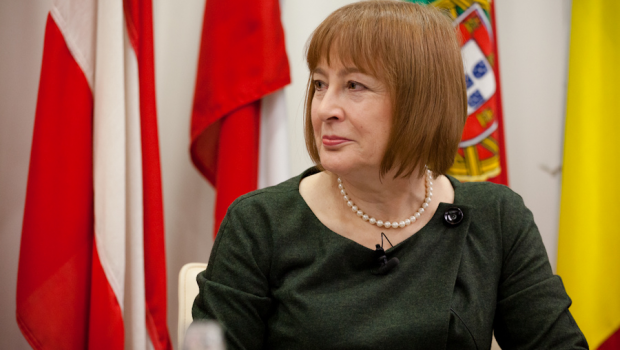 Even before her long-standing political career, Mary Honeyball has always been passionate about women’s issues and believes in the role politicians and entrepreneurs can play in fostering a more gender-equal Europe. UNITEE met with the British Member of the European Parliament of the S&D group to discuss women entrepreneurship in Europe.

You have been working in the non-governmental sector and for charities before being elected Member of the European Parliament in 2000. What motivated you to pursue a career in European politics?

I have been involved in the Labour Party in the United Kingdom for a long time. I always had a very strong interest in women’s issues, women’s progress and getting more women represented in politics. We have been talking a lot about women getting in the Parliament and representative positions, but we should put our money where our mouth is.

When I first became a member of the Barnet Council, one of London’s local authorities, in 1978, there were 60 members with only about five women. More often than not, I would be the only woman in a meeting. It was very stark then and you really felt that you had to fight for it. It was through this belief and working with women in the Labour Party that I got into European politics.

Euroscepticism and anti-immigration sentiments have been rising across Europe. The European elections clearly highlighted this trend. In the UK, UKIP is gaining popularity constantly. Why do you think so many people are afraid of immigration?

The big discussion in the UK at the moment is the freedom of movement of people, which is causing a lot of anxiety. But it is not just a UK issue, people in other European countries have the same kind of attitude. Although many talk about the UK being anti-immigration, we actually had anti-racism laws a long time before anybody else in Europe did. This is due to the fact that since the 1950s, immigrants came to the UK from former Commonwealth nations.

There is a real fear of immigrants because it is a time of recession: countries are all out of jobs, public services are being cut back, and locals feel that they are not getting what they should be getting in terms of benefits because they feel immigrants are coming in taking it all away from them.

When economies are functioning better, this fear is not the case. In 2004, during Tony Blair’s time as UK Prime Minister, Eastern European countries joined the EU. The UK decided not to have any transitional controls and as the economy was doing well, negative feelings towards immigrants were there but were not as severe as now. This shows that in bad economic times, people look for somebody to blame, a scapegoat.

UNITEE and its British member federation BIZNET represent entrepreneurs with a migrant background, who we refer to as New Europeans. We know that they greatly contribute to innovation, trade and to economic growth across Europe. We work towards a mentality shift regarding immigrants or New Europeans and try to show concrete examples of their positive contributions to their new home countries. Do you think these initiatives are helpful?

Absolutely, these initiatives are what we need more of. We need to start talking about immigration as being advantageous. We need to change our attitude towards immigration and become much more tolerant. In the UK, we benefitted greatly from a large immigrant workforce, especially in the service industry.

Certainly in the UK, the number of women who have started their own business has been increasing. Still, there are many reasons why women do not become entrepreneurs. One main reason is that many of them do not feel confident about the idea of starting a business. It is risky and if you have children, there is a limit to how much risk you want to take. Even now, women still have more difficulty getting financed than men.

We recently published an initiative report that tackled all these kinds of issues. We need to focus on practical help such as providing finance, encouragement and trainings to women. We could set up free business courses in colleges, acquire more funding from local governments, etc. Also, large private companies have a role to play: they could provide women with their expertise and mentoring. We could do a lot more.

New European entrepreneurs are known for their dual cultural background, entrepreneurial spirit and contribution to EU countries’ economy especially in the UK. However, most of them are men. What would you suggest could be done in order to encourage entrepreneurship among New European women?

In the UK, this is changing with the next generation because migrant girls have been through the country’s education system, thus have a different attitude towards business only being a man’s world. More entrepreneurship among New European women depends on the attitude of the Member State to encourage them, such as equal pay. Equal pay is a big part of this.

How can women be more encouraged to aim for senior positions in business?

Boardrooms are important because they set the tone of a company. It is important to have proper representation of women at all levels. Women on Boards provide role models to encourage other women to dare to aim high. If women see other women succeed in landing a senior position, it is very encouraging.

When women in the company reach a critical mass, the process of encouraging more women gets much easier since this reflects more acceptance from the men in the company. But business, as well as politics, are not there yet.