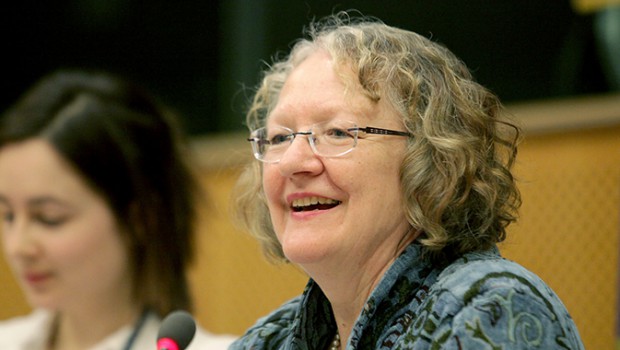 Actually, I never thought about going into politics when I was younger. I was always interested in helping people. I was engaged in the protestant church and Amnesty International for a long time as a student. But then I realised that, if I really wanted to change something, I had to go into politics. This is why I joined the liberal party.

You are a former member of Women’s Rights and Gender Equality Committee at the European Parliament and the Vice-President of the ALDE Party Gender Equality Network.  Will you continue to work on this issue in the future?

Yes, absolutely. We still have not reached what we want: real gender equality.

My interest for the issue is based on my own experience.

I am a farmer’s daughter. When my younger brother was still little, my father asked me to drive the tractor. However, once my brother was old enough to drive it, he took over and I was send to the kitchen.

All I thought was: that’s not right! And ever since it has been one of my core issues.

I left the gender equality committee, not because I am not interested in the topic anymore, but because two of our liberal German members were in this committee. No one, however, in the fishery committee.

Fishery is of absolute importance for my region, for my constituency. Therefore, I decided to change.

First of all, we are trying to convince people to vote and say: Yes, Europe is a very good thing!

For ALDE, it is crucial to have reasonable politics. For example, to have a smaller commission. Because 28 commissioners are by far too much. It is not very transparent, not very efficient. Therefore, this needs to change.

Besides this, ALDE always concentrates on asking: what does a certain directive or regulative process really mean for those who live at home? Not only for the citizens but as well for the entrepreneurs.

In the elections, I want to focus on chances, because Europe should be a continent of chances, and give all people a chance to live an independent and self-determined life.

Euro scepticism and anti-immigration parties are rising. We have seen this trend in multiple countries in Europe.  How do you think the European Union in general can increase the public’s understanding of the positive contributions of diversity to the EU?

The Eurosceptics are so successful at the moment because of the euro crisis. Whole Europe is affected by the economic downturn and everything that has been united before is now in danger to fall apart. That is something we do not want.

In Europe, on the other hand, we are experiencing the demographic change. If we want to remain a big player on the global stage, despite having less and less people, we can only do that by staying and sticking together, so that we are efficient and speak with one voice.

So are you for more Europe? A stronger, united Europe?

I am absolutely for more Europe. My dream is the United States of Europe. I want a stronger Europe with more power in Brussels for things of interest for all our people, like environment, foreign relations, internal market and data protection.

However, in some cases, Brussels should hand power back.

For example food. Brussels should not forbid any special kind of food, this should be up to the countries or the regions. Best would be if nothing would be forbidden at all, instead we only provide information. That’s the way to go I think.

In the German national elections, the Liberals did not manage to get into the Parliament nor the government. Do you fear for a similar result in the 2014 European Elections ?

I think the Liberals made several mistakes in the government. The government itself has been very successful, the German economy is very strong, and Germany is doing well. However, people thought it was Angela Merkel who was responsible for this success, not the liberals.

So the liberal part of the effort was not seen. Therefore, the Liberals should not be the appendix of another political group, in the German case the CDU/CSU. That was bad for us, and people did not like it.

And besides, we should really concentrate on our strength: fighting against bureaucracy, fighting for civil liberties and for human rights.

That is something positive we can see here in the European parliament: the Liberals are always needed.  As we do not have the classic government and opposition, the liberals are in the centre and quite often important for the outcome of a vote.

When we vote for financial and economic issues, we vote in line with the conservatives and when we it comes to human rights and openness in society, for example homosexuality, we vote with the left side. None of the other groups has this profile.

And we are the one that fight strongest against bureaucracy and for small and medium sized enterprises. This is something we have to point out and tell people.

Share the post "“My dream is the United States of Europe.” An Interview with Gesine Meissner MEP"

ALDE
Group of the Alliance of Liberals and Democrats for Europe
CDU
German Christian Democratic - centre-right political party.
MEP
Member of the European Parliament. The MEPs are your representatives at the EU level. They adopt EU legislations and the budget. You elect them for a period of 5 years. The next election is in May 2014.
Internal Market
The geographical area across the EU where you are free to live, work, study, do business or retire… Thanks to this single market, you can also enjoy, from home, a wide variety of goods and services coming from all over Europe.
Eurosceptics
Those who criticize the European Union (EU) as being too bureaucratic and/or undemocratic, or even not viable. Some of them actually strongly oppose the deepening and widening of the EU.