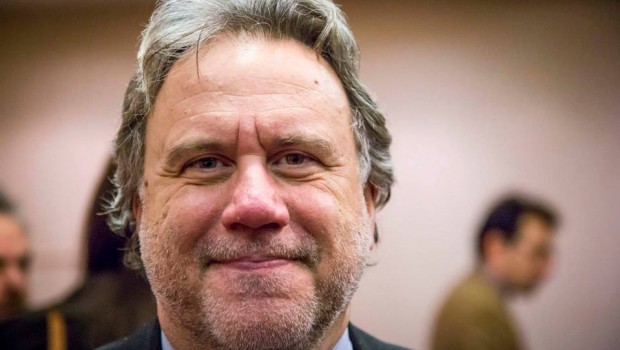 Georgios Katrougkalos is a recently elected Greek MEP of the Confederal Group of the European United Left – Nordic Green Left. An internationally-recognised academic lawyer, he has published more than 100 papers on legal theory and on administrative and constitutional law in specialist publications in Greece, the United States, Germany and the United Kingdom. He has been a senior Emile Noël fellow at the Jean Monnet Centre of New York University School of Law and has worked as an international expert in various institution-building and legal-reform projects in countries such as Syria, Uzbekistan, Albania, and Armenia.

Considering his impressive background, UNITEE interviewed him on his opinions about the rising Eurosceptic sentiment and international issues affecting the European Union.

Mr Katrougalos, your CV is very interesting and diverse. You are a university Professor, a constitutionalist, and also a recently elected MEP. What motivated you to start a political career?

I am not a politician and I have no intention of remaining in politics, but when things become difficult I believe that everyone should help in his own way. Being a constitutionalist and having thus as field of studies constitutional law, which is by far the most political kind of law, I always had a relationship with politics and political institutions, of course not as a politician but as a constitutionalist. Becoming an MEP only formalizes this relationship with politics that I have always had.

Which changes would you like to see in Europe in the near future?

Besides the need to change things in Greece, another reason that brought me to become actively involved in politics is the belief that there is no way out from the path that Europe has taken nowadays. I myself am in favour of the necessity of a politically united Europe, but this can only happen if the current economic austerity measures will be stopped, for they basically destroy the foundation of the European social model. What differentiates the European model from other Western countries such as the United States is our market prototype, which is regulated according to social and labour rights. This has been compromised in the last two-three decades as a consequence of the sway of new-liberal ideas and of the complete labour market liberalisation. My opinion is thus that we need more Europe, which essentially means more social Europe.

What is your bond to Greece in your activity as an MEP?

If we wish to change things on the European level we first must start changing them in our own country. Greece’s situation is therefore peculiar for it could mirror the situation of the other member states in two ways. First, the memorandum experiment has been applied in Greece in a much more intense manner than anywhere else; if this experiment had prevailed we would have had actual concentrated neoliberal policies like no other country has had. However, the memorandum experiment has failed, not only in its economical aims but also and foremost in its social ones.

The last elections showed a rising sentiment of Euroscepticism in the European population. What do you think that the EU could to come closer to its citizens?

I think that what was made clear by the elections is not the failing of the European dream – the development of free move programmes even in the academic field (such as the ERASMUS Programme) are one of the oldest dreams of humanity, and this is positive especially for both young people but also for society in general. This is however the nice side of European reality. The bad part is the application of austerity and neo-liberal programmes in southern countries of the last decade. What thus pushes away citizens from Europe is not the political dream of a united Europe, but rather the economic reality of neo-liberalism. In short, to gain support, Europe must become social.

A very topical issue are the TTIP negotiation. Could you please explain what your opinion on the matter is?

My biggest concern is the absolute secrecy with which the negotiations are taking place since not even we, members of the INTA, have complete access to all documents. My fear is that this attempt to create a common trade space will end up undermining the European standards which are, in many aspects, higher than the American ones.

Concerning the economic sanctions that the EU is applying on Russia, can you state what your position and, eventually, concerns are?

My opinion is that applying economic sanctions to Russia is counterproductive. In this very moment Greek, Italian farmers are losing money – not to say they are on the edge of bankruptcy – because they oriented their economic activities towards Russia. On the other hand, we are not even helping Ukraine by putting it in the middle of a commercial war. Ukraine is a country of multiple and diverse aspects: one pro-western and one pro-Russian side, different mentalities, different values and a political sphere controlled by oligarchs. Europe must help Ukrainian people by giving them the chance of determining their law on their own, without being dependent neither from the East nor from the West and most of all without forcing Ukraine to choose between commercial partners, because commercial agreements are not exclusive – making one with a country doesn’t impede to make one with another.

What do you expect from the new Commission concerning the external action of the EU?

The external political action of the European Union is still very bond to the one of the United States. I wish Europe could show more leadership in this field but this would imply a change of perspective drifting away from the traditional NATO alliance, and I honestly don’t see that happening in the legislation of the new Commission.

TTIP
The Transatlantic Trade and Investment Partnership (TTIP) is a proposed free trade agreement between the European Union and the United States.
Austerity
Governments spend less in order to reduce budget deficits.
MEP
Member of the European Parliament. The MEPs are your representatives at the EU level. They adopt EU legislations and the budget. You elect them for a period of 5 years. The next election is in May 2014.
UNITEE
UNITEE represents entrepreneurs and business professionals with a migrant background, most of them of Turkish descent, and whom we refer to as ‘New Europeans’. http://www.unitee.eu/