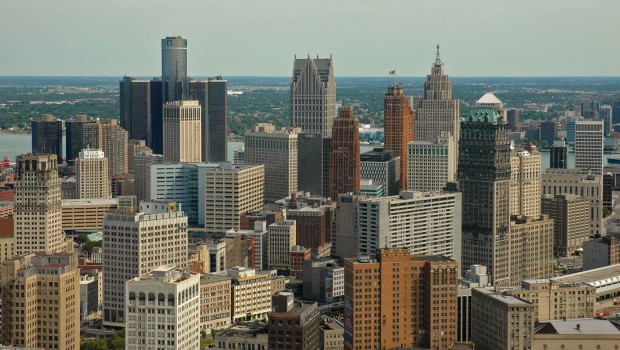 How do you fix a broken city?

Detroit, Michigan, has in recent years come to epitomise urban failure. The sacred capital of American automobile, hosting the headquarters of Chrysler, General Motors and Ford, has now turned into a ghost town, prey to extreme poverty and abandonment.

Numbers show the depth of Detroit’s problems: after reaching its population peak in the 1950 census at over 1,8 million people, it started a steady decline, reaching just over 700.000 residents in 2010 – a total loss of 61% of the population. Furthermore, as if depopulation was not enough, unemployment skyrocketed: of the 50 largest cities in the United States, Detroit has the highest unemployment rate, at 23, 1%. As a definitive fall from grace, in July 2013, Detroit, prostrated and unable to pay its debts, was forced to file for bankruptcy: the largest city in American history to do so.

How could such a doomed city be kept from eventually drowning? According to Steve Tobocman, a former Speaker at Michigan State’s House and currently directing Global Detroit, a solution can be found in using immigration as a development tool. “Immigration alone cannot save Detroit”, Mr Tobocman argues, “but if carefully managed in the context of a broader economic development strategy, immigration may be a promising tool for boosting Detroit’s economic prospects.”

Indeed, the potential of immigration clearly appears from an overview of data. According to a research carried out by Global Detroit in 2010, migrants’ contribution is already more than proportional. “Migrants in Michigan are more likely to be highly educated, with around 40% of Michigan immigrants having a degree, which is more than the native-born population, at 22%”, points out Mr Tobocman. “Furthermore, not only are they more educated; they are also more entrepreneurial: between 1995 and 2005, 32.8% of the hi-tech companies that were founded in Michigan started with at least one immigrant founder.”

It is in view of fostering this development that Global Detroit has in recent years started a series of initiatives aiming, on the one hand, at developing the entrepreneurial spirit of the city’s migrant population and, on the other hand, at pushing the regeneration of disfavoured neighbourhoods by empowering their communities. “In our initiatives, we follow two main guidelines: the first is that they have to be focused not only on immigrants, but also on incumbent communities, looking on how incumbent communities benefit from immigration. The second, our projects are community-driven: communities are invited to come up with their own solutions”.

Global Detroit is just one of many organisations and individuals advocating for migration to reverse the decline of Motor City. “Indeed, the city has a huge potential in research and development”, Mr Tobocman points out. “And even after the crisis, Detroit is still the automotive capital of the country. We just have to innovate. There are plenty of hi-tech, skilled jobs to fill”.

The idea has supporters even from the highest levels of the political hierarchy. Last January, Michigan Governor Rick Snyder presented a grand plan: attracting 50.000 skilled migrants over five years using a special visa program, EB-2, which is offered every year to legal immigrants who have advanced degrees or show exceptional ability in specific fields.

More specifically, the plan would involve 5.000 visas issued during the first year, with 10.000 each year in the next three years and 15.000 in the fifth and last year. The programme, targeted to individuals both wanting to settle in the US and already in the country, also tries to appeal to more than 25.000 international students currently studying at universities in Michigan to stay there after their studies: a tool to fight ‘brain drain’.

The proposal of Governor Snyder, a successful businessman himself before running for office, has received praise from Detroit’s business community. Not that Snyder’s plan does not offer reasons to doubt. The main difficulty is that immigration policy belongs to the federal government. Which means, Detroit does not have the freedom to issue visas; in practice, the Governor’s proposal is “asking the President to use his executive power as an urban revaluation tool, allowing immigrants to settle in the city of Detroit on a five-year period”, confirms Tobocman. But if ever the President finally decided to bypass Congress and act through an executive order, why should his action be limited only to one, even if relevant, city?

One way to avoid the potentially discriminatory approach of a ‘one city’ solution would be to institutionalise it. According to Angelo Paparelli, a Detroit-born immigration lawyer, a viable solution to reconcile local development and equality of chances would be to use for immigrants the same form of competition existing in schools: states could submit economic revival proposals to the government to apply for a larger share of work visas for foreign skilled workers and entrepreneurs.

In the end, the most important way to reverse Detroit’s decay would be for it to rediscover the entrepreneurial drive that made it big at the beginning of the 20th century. Talented people came from all over the US and abroad to participate to the collective endeavour of inventing and building the best cars in the world. Can immigration alone bring the same spirit back to Lake Michigan’s shores? Global Detroit, Governor Risk Snyder and many others are ready to prove that it can, indeed.

This post is an extract from an article published in issue 3 of UNITEE’s new magazine, The New European, dedicated to how European cities can meet the challenges of diversity and integration. The complete online version can be read for free here.

brain drain
Buzzword for a significant emigration of educated or talented individuals. It can result from turmoil within a nation, from there being better professional opportunities in other countries or from people seeking a better standard of living.
New European (Parliamentary calendar)
The annual calendar of the European Parliament, where you can find all the voting sessions and various meetings the Members of the European Parliament must attend. Click here to have a look at the 2013 calendar.
New European (New Europeans)
People with a migrant background, who live and work in a European country and, in most cases, do not intend to go back to their country of origin. Their future is, rather, in Europe
UNITEE
UNITEE represents entrepreneurs and business professionals with a migrant background, most of them of Turkish descent, and whom we refer to as ‘New Europeans’. http://www.unitee.eu/