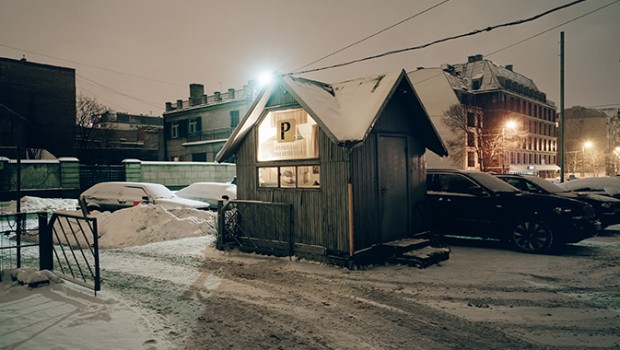 Since the beginning of the industrial era, many photographers have tried to capture the rapid, unpredictable and fundamental changes induced by the process of urbanisation.

By photographing a guard in his guardhouse, right at the moment when he spotted or approached the photographer, Reinis Hofmanis, in his work “Territory”, takes us into a new dimension, somewhere between the thin borders of private and public space.

The son of two Latvian artists, it was only in 2007 that he abandoned purely aesthetic themes to address social issues.

The places in Latvia where he choose to take his photographs, represent the very symbols of the country’s growing economy and construction needs: office buildings or parking lots for private investors.

Latvia, which became the 18th country to enter the Eurozone last week, is set to be the EU’s fastest growing economy in 2014, with an expected growth of 4.1 percent.

A breeding ground for anyone interested in this intermediary phase, where the borders between different environments draw closer to each other, sometimes even becoming intertwined.

*”Visual Narratives: European Borderlines” was a project held in 2011-2012 that brought together 12 young photographers from Latvia, Turkey, Iceland and Portugal, among them Reinis Hofmanis. For more information about the project: http://www.issp.lv/en/projects/visual-narratives-european-borderlines/about