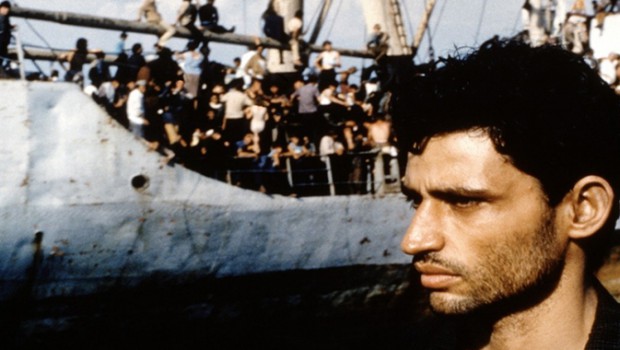 Films tell us more about immigration that any news channel.

Even Charlie Chaplin was an immigrant. He was born in the United Kingdom at the end of the 19th century, and moved to America to work as a comedian. No wonder that « The Immigrant » is one of his most successful and autobiographical films. The story focuses on two immigrants, played by Chaplin and Edna Purviance, on their trip to America.

In the movie, Chaplin paints a realistic picture of the difficulty of immigrants arriving in a new world, and masks this social issue with comic scenes. One of the movie’s most famous moments shows the immigrants getting their first view of the Statue of Liberty.

We see prominently their surprised expressions when they are abruptly pushed behind a rope by policemen. Impotent spectator of the scene, Chaplin looks with a sigh at the Statue of Liberty, wondering what kind of freedom they will ever get.

Almost one century later, we can proudly say that the conditions for immigrants from one EU Member State to another are much better, thanks to freedom of circulation. However, this doesn’t yet apply to many other extra-European immigrants, as we can see in « Lamerica », by Italian director Gianni Amelio. After the fall of the Communist regime, Fiore, a seasoned Italian con man, and Gino, his young apprentice, arrive in Albania to do business.

They choose Spiro, a confused old man in prison, as chairman of their company. While Fiore goes back to Italy in order to find financings for their business, Gino hunts for Spiro who tries to constantly escape from that situation. During this chase, Gino finds himself in a crowd of homeless Albanians who are desperately trying to find a boat trip to immigrate to Italy. In this chaotic situation, Gino is robbed of his car, clothes and passport, and becomes at the end one of those homeless he has heavily criticized the whole time.

This film challenges in a very effective way the notion of «denial of personal responsibility »: at the beginning of Lamerica, Fiore, Gino’s boss, doesn’t hesitate to snipe at Albanian’s lack of work ethic and disorganization. The Italian capitalism and European nation-state system are never took into account as possible causes of the Albanian state of poverty.

On a funnier tone is « Almanya – Willkommen in Deutschland », by German-Turkish Director Yasemin Şamdereli.

The film tells the story of three generations of a family whose grandfather left his village in Anatolia, Turkey in the 1960’s to work in the Ruhr, Germany.

Almanya raises questions about family, dedication and cultural belonging, on an individual as well as on a mass scale. A question we could ask ourselves after watching this movie is: what is culture? Is it about traditions? Languages? Or is it something more individual?

During the whole film, Cenk, the protagonist, does not speak Turkish. So, to explain the degree of misunderstanding and alienation encountered by his grandparents and parents, then children, the Turks speak German and the Germans Turkish, in a clever role inversion.

Immigration is an actual issue, constantly called into question. For this reason, cinema can definitely help form an opinion that differs from the -very often- biased news coming from media or politicians.