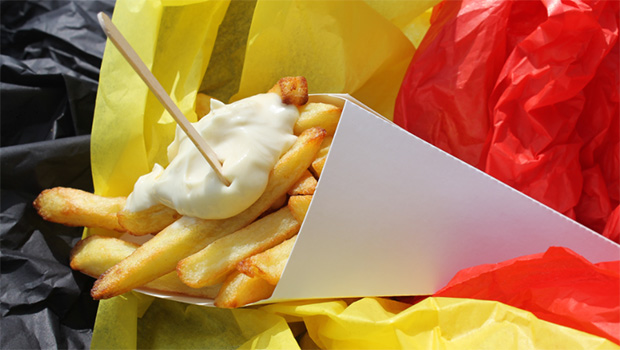 French fries make our top of the list of mouth-watering cravings, especially for the cold months ahead. But how French are French fries?

It is Fry Week in Belgium! Here is the scrumptious, or not so scrumptious, story behind Europe’s favourite winter munchies.

Despite its name, the French fries is actually often claimed as Belgian, locally referred to as frites (French) or frieten (Dutch). “Potatoes served in the French manner”, as former United States President Thomas Jefferson once put it, are now found everywhere around the world as a staple side dish or snack, creating a nearly global fry culture.

The popularly claimed Belgian origin of French fries dates back to the 1600s when Belgium was part of the Spanish Netherlands, in the Meuse Valley located in the French-speaking region, Wallonia. People from Namur, Andenne, Dinant, and Huy at that time were recounted in old manuscripts to deep-fry potatoes, which is the basic concept of making fries.

During harsh winters, the poorer inhabitants of the Meuse Valley who have been used to eating small fish were unable to go fishing by the Meuse River due to the frozen waters. To avoid starvation, they would instead fry potatoes, and would even cut them in the shape of small fish.

But the problem is, according to some historical documents, the potato or locally called patate or pomme de terre, did not arrive in Belgium until the early 1700s, contradicting the popular claim. Potatoes themselves came from South America and was first introduced to Europe in the 1500s when the Spanish conquistadors came to the rich continent.

Who first coined the ‘misleading’ term “French fries”? Why call it French and not Belgian fries?

The Americans, the snack’s number one fans. By the end of the First World War, servicemen from the U.S. arrived in Belgium and were first introduced to frites which is now an essential part of the small European country’s gastronomical and cultural heritage.

Some people believe that since the French language was and is still widely spoken in many parts of Belgium, especially in Wallonia, and was also the official language of the Belgian Army, these Americans brought back the recipe for the fried delicacy, simply calling it French fries. They are now found in every McDonalds and other American fast food chains in all corners of the globe, with different ways of frying and different sauces to choose from.

Another possible reason is that there was an ongoing international “French gastronomic hegemony”, especially during the early 1900s, which Belgian cuisine had been associated with, if not had adapted, due to the lack of understanding or identity of the country’s local cuisines.

Belgians have their eyes on the fries

There is still an ongoing dispute between Belgians and the French as to who rightfully owns this signature snack, given the rather tricky history and timelines of Belgian occupation by its neighbours. There has been a recent campaign by the Flemish Belgians to give the country’s national snack a UNESCO World Heritage status, and at the same time give Belgium ownership of this favourite winter munchies.

French fries are more than just fries for Belgians, especially now. Before this week’s Fry Week, the French and German-speaking communities in Belgium joined their Dutch-speaking counterparts in helping the country gain UNESCO and universal recognition of its frituur culture.

Also, friteries, or stalls where you could buy French fries in cones or trays with different sauces (béarnaise, curry, ketchup, mayonnaise, tartar, etc.), are omnipresent across Belgium. Their cultural, social and economic value to the country is priceless, with almost 5,000 booming friteries in Belgium.

Hungry now? Care for some French… I mean Belgian fries?