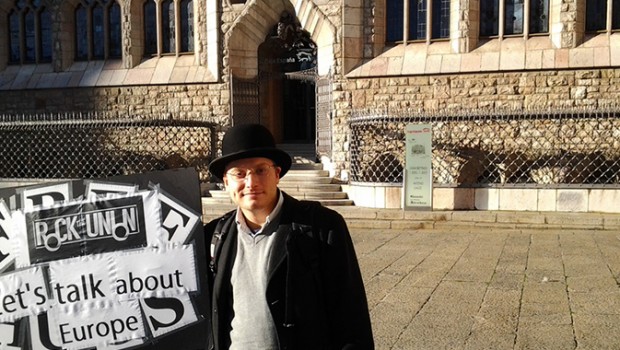 Hans Mund is a German 29 years-old communications analyst based in Brussels. He defines himself as a “creative solution finder” and has founded Rock the Union; a project with which he pursuits to engage with the average EU population and raise social awareness towards the upcoming European Parliament’s elections.

Between September 2013 until May 2014, he is travelling across the whole European Union, visiting several cities in all 28 Member States in order to ask random citizens about their perceptions of Europe and about what they would like to change.

He films those little interviews and gives them voice by sharing them on Youtube. His website is called “Rock the Union” and its motto is “Let’s talk about Europe”. He is also a blogger, an active user of twitter via @rocktheunion and has his own Facebook page, with more than 1600 followers: www.facebook.com/RockTheUnion.

The main goal of Rock the Union going beyond institutions is meeting the actual population that constitute Europe. That is why Mund relies on his German, English and French skills in order to interview all kinds of people: from all ages and both genders, regardless of educational levels or any other cultural label.

He asks random people to devote two minutes of their time and answer three very simple questions: “Do you know that we have European Parliament elections in May?”, “Will you vote?” and “Is there something you want to change about Europe?”

“Since not many people know this, I decided, in June 2013, to do a tour through Europe before the European Parliament elections and communicate these elections as well as to ask questions to the people on the streets of 116 different cities in all the 28 European Union Member States and video tape them.”

He avoids hotels, and prefers coachsurfing, sleeping and friend’s places or, if nothing else works, to spend the night in his car, his only company while travelling.