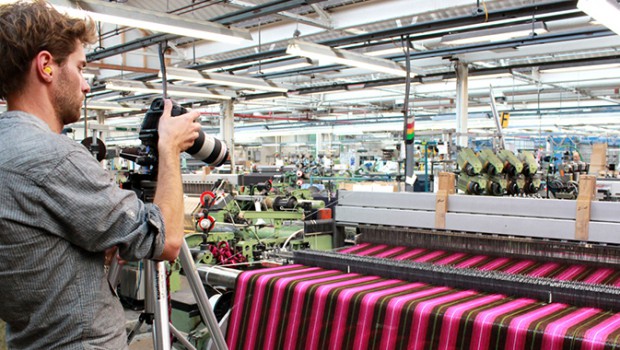 Multistory and Magnum Photos have launched, in cooperation with nine British cultural institutions, the Open for Business project through which they aim to approach the contemporary world of manufacturing from a different angle. To do so, nine Magnum photographers have visited several factories all over the UK in order to create a visual archive.

From the vantage point of different lenses, this project highlights the importance of the manufacturing sector and portrays an example of how smaller enterprises, sometimes, have the best performances.

Despite what people might think, manufacturing is not dead nor is it on its way to extinction. In fact, the financial value of the British manufacturing industry has increased throughout the past decades and its output stands out as one of the highest in global industries.

Regardless of the current economic instability and the challenges that businesses have been having to confront, the manufacturing sector has experienced astounding improvements as a result of increasing investments in research and development.

As the cradle of the Industrial Revolution, the British economy remains rooted in the country’s industry and manufacturing sectors. However, these traditionally important industries have had to reinvent themselves as well as their products in order to maintain the UK’s position as world leader in many areas of the sector.

The factories are part of the heritage of the regions that have been covered by the different photographers and the purpose of the project therefore lies in presenting a local and ordinary job on a national scale.

It is remarkable how these intricate activities, that do not receive the credit they deserve, make a huge difference in the economy of the portrayed regions. Undeniably, the industrial and manufacturing sectors stand out as economic sectors of exceptional resistance and heterogeneity.

The exhibitions of this project, funded by Arts Council England and their cultural partners, will take place in nine British cities from January 2014 to September 2015.

Through the eyes of these nine photographers, the audience can immerse itself in the workers’ routine, enter the small windows they have created and focus on the individual and human details that tell a deeper story. Their challenging work reveals the reality of the environment; they do not just make products, they create them from nothing.

Hence, this project captures their entrepreneurial spirit, as well as the significance of migration to their workforce.

Peter Marlow, photographer in charge of the Black Country, expressed his fascination on how “the old fashioned idea of ‘craft’ still has such a strong influence on the manufacturing process and also what a critical role new immigrants from the more recent members of the European Union play in many of these manufacturing success stories.”

At the same time, Alessandra Sanguinetti, who visited factories around Manchester, emphasized the importance of each individual within the whole picture of manufacturing: “Each worker is a fundamental thread in the intricate web that links us all together in this economy”.

Once again, this unconventional approach to the manufacturing sector illustrates how essential migration and entrepreneurial spirit are for progress and development.