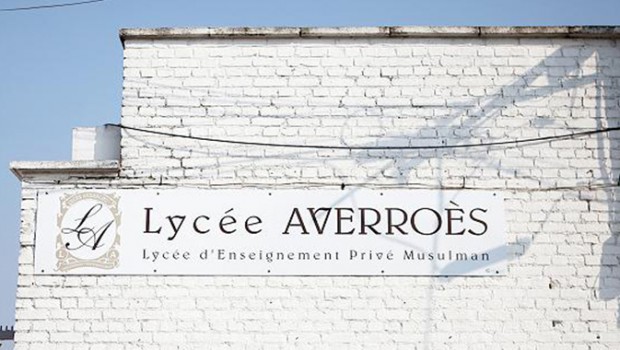 What should the relationship be between the state and education? What constitutes a citizen?

These are complex questions that foster many debates and controversies all around Europe. In its own small way, the Lycée Averroès in the French city of Lille is slowly trying to give its personal answer. It tries to do so by acting upon two of the most sensitive aspects of our contemporary and increasingly multicultural European society: education and religion.

Lycée Averroès, established in an area which has traditionally been a destination for migrants of all nationalities, is the first private Muslim high school in France. We meet the Director of the Establishment, Mr Hassan Oufkir, in his office at the beginning of the big one-floor building housing the school. We have been introduced by some smiling office clerks wearing a veil. Indeed, the veil is particularly important: this is how everything started.

As Mr Oufkir recalls, in 1994 a group of female high school students were expulsed from the public Lycée Faidherbe because they refused to take off their veils while in class. In the French educational system, which severely respects the separation of church and state, all signs of religious belonging have never really been tolerated. The expulsion of the girls motivated the Northern Islamic League, the organisation representing all Muslims in Lille’s region Nord-Pas de Calais, to organise classes in the city’s Mosque to allow them to pass their baccalauréat, the French final exam. Out of these experiences arose the establishment of a high school: initially thanks to private funding in 2003 and later, in 2008, after having been recognised by the state, it became the only Muslim school with a contract.

“We are a school à caractère propre”, explains Mr Oufkir. In short, this means that the programmes are approved by the Ministry and the teachers are appointed by the State. The school, in turn, is in part paid by the state and it can select its teachers according to its founding values together with retaining some freedom on the subjects taught. Such a freedom is evident in one of the classes that has stirred the most criticism in recent years, Muslim Ethics. “It is not a religion class, we are not a Mosque!”

The aim of such a class is, of course, consistent with the vision of the school: creating French citizens with a Muslim culture. The fact that the school gets its name from Arab philosopher Averroès, who acted as a bridge between Western and Eastern cultures during the Middle Ages, underlines this ambition. It manifests itself during our tour around the school: while the Director guides us to a conference room at the end of the corridor, we pass along a prayer room where some students sit or kneel down on a soft carpet. The silence in the room is similar to the one next door, where a professor is teaching French constitutional law to a group of students. “Once every two weeks we have a conference like that”, he explains. Then he points at a camera and adds: “They are all recorded, so we can put them on our website for the parents and the students who couldn’t take part”.

The school proves that Islamic and French Republican values can coexist. Its success is evident: starting with just thirty or forty students, the school currently has 500 pupils and has moved from the rooms in the Mosque where it started to a new location, about a hundreds metres away, where it stands today. It is nowadays very difficult to enroll in the school: “Every year, we receive 200 requests more than what we can actually afford. Parents look for a Muslim education of course, but more importantly for high quality classes and teachers. And this is what we offer”. The quality of the education at Averroès is confirmed by the fact that it has been nominated for best high school in France in 2013, overtaking more established and posher schools around the country, especially in Paris, thanks to its 100 per cent graduation rate.

Now, this small jewel of integration would like to keep on growing and expand beyond the Muslim demographic to which it usually appeals. “For the moment, there is still some mistrust among non-Muslims to come here”, remarks Mr Oufkir. “But I am quite optimistic: this year, we already have some children from religiously diverse couples. I hope this multiculturalism will only increase in the future”.