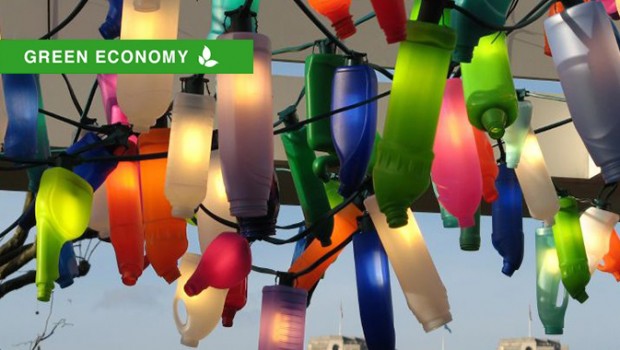 The Ukraine crisis keeps Europe on the edge. Not only because it is causing tense diplomatic relations, but also because of the important energy supplies coming from Russia that so many European countries depend on.

More than ever, increased energy and resource independence seems to be a key objective to guarantee prosperity and wealth in Europe.

Today we face the underlying problem of our current linear economic model that depends heavily on cheap, easily available resources and fossil energy.

We take, we make, we use and then we waste.

All without considering that the supply of materials will eventually decrease and be extinguished. Resources and energy are getting increasingly difficult and expensive to exploit. So can we make our economy work in the long run?

The European Commission is now addressing the problem and issued a proposal on the 2nd of July that aims to increase recycling and phase out landfilling with a series of legally-binding measures. The EU wants to go toward a “circular economy”.

But what exactly is this performance based circular economy?

Circular economy is defined as an economic model that produces virtually no waste, with raw materials being re-used and recycled continually within a closed loop.

So imagine: What if we did not buy goods themselves but the service? What if we favoured access and performance?

Manufacturers and retailers would own the product, not you. And maintenance and repairs would become part of the deal. It may even include running costs like electricity.

For companies this makes good business sense, as they would remain in possession of valuable materials, especially when the future availability and prices of these resources are uncertain or forecast to rise.

It would also encourage them to face out premature obsolescence, rather than designing it in to increase consumption. The Commission’s package aims to encourage businesses to adopt more environmentally-friendly practices, such as improving the longevity and reparability of their products, by arguing that this can benefit them in the long run.

Take the car sharing schemes. We can either use vehicles owned by manufacturers, by car sharing companies or sign up to a local person network.

Buying expensive products up front would no longer be a necessity. It already happens with mobile phones and cars. Why not fridges, washing machines, power tools and so on?

And companies win too. Materials extraction and production can account for up to 75 percent of the energy used to make goods. So if we could switch to scale manufacturing, it would dramatically reduce our energy needs.

The Commission believes that aside from the environmental benefits, the circular economy model would create 580,000 new jobs in environmentally friendly businesses across the European Union. Furthermore the package could save some €600 billion, or 8% of annual turnover for companies by reducing demand for costly and scarce resources.

Janez Potočnik, the European commissioner for the environment and strong supporter of the proposal, said: “We are living with linear economic systems inherited from the 19th century in the 21st century world of emerging economies, millions of new middle class consumers, and inter-connected markets. If we want to compete we have to get the most out of our resources, and that means recycling them back into productive use, not burying them in landfills as waste.”

The shift to a circular economy has already begun and many businesses have already improved their environmental footprint. With this new direction businesses are expected to improve their resource productivity by 15% between 2014 and 2030.

These are all small steps but they are nevertheless steps in the right direction. The shift away from the linear waste producing economy is urgently needed, for Europe’s competitiveness but especially for a green and sustainable future for ourselves and the generations to come.

European Commissioner
One of the 28 members of the Commission, the ‘government’ of the EU. Each heads a specific issue of the EU’s legislation.