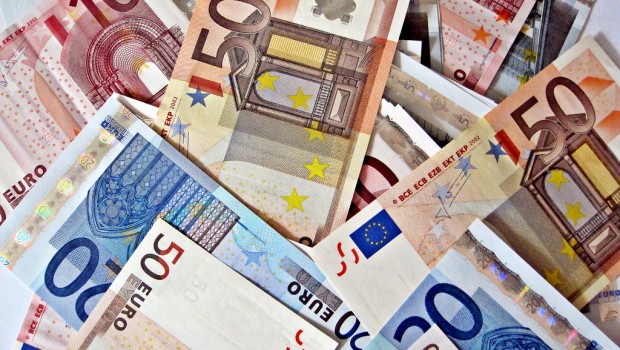 ‘Europe is bad for us! It costs us a fortune but only causes us problems!’

Europesceptics do not get tired of repeating these arguments, and as the outcome of the European elections this March have shown, many people tend to believe them.

But how costly is the EU really? Does Brussels just come up with unnecessary troublesome policies and is truly good for nothing? Is there a way to measure the real impact of Europe integration?

Well, yes there is! And the facts do not quite fit in with the doom-mongering of the Eurosceptics at all.

‘Mapping the Cost of Non-Europe’ is a report by the European Parliament’s European Added Value Unit that stresses the costs the non-implementation of EU level policies might cause. So, if there is no common action at European level, in a specific sector, there might be an efficiency loss to the overall economy and/or to the collective public good that might otherwise exist but is not being realised. One can measure the potential economic benefits in terms of additional gross domestic product (GDP).

Take for example the lacking degree of integration in the banking sector during the financial crisis in 2008: it did cost Europe a lot of money!

Therefore, in the future, we should make sure to not repeat this mistake.

Several fields have been identified that should be tackled by European decision makers.

For example, €340 bn could be saved simply by coordinating the widening and deepening of the digital single market on a continental scale on a European level. This does not just include the elimination of roaming charges, but also the reform of the financial services sector including internet transaction and online banking safety.

Other aspects that would save Europe, and SMEs in particular, a lot of money are regulations concerning VAT and tax evasion, an integrated energy market and revision of EU public procurement rules that should make it easier for SMEs to win public contracts and reduce the red tape often associated with the process. 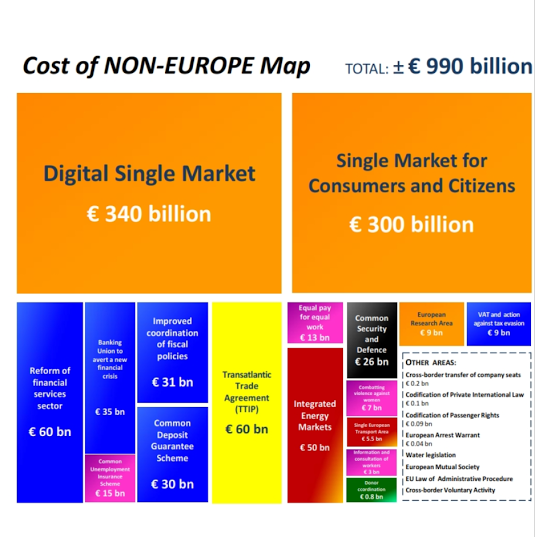 There is a lot of room for improvement in the coordination of national and European development of defence policies. At the moment, national states often do their own thing. This leads to considerable duplications or dysfunctional ties – easily prevented by better collaboration on the European level.

Taking all the different policy fields together, Europe could save more than €990 bn during the course of the next five years. The benefits of saving such a huge amount of money are not easily denied. As Klaus Welle, Secretary General of the European Parliament, put it: ‘Administrative costs of the EU are €6 bn. If this investment can generate €990 bn, it’s definitely worth it!’

For all of you who now say it is not surprising that the European Parliament comes up with such figures, you might be surprised to hear that independent think-tanks come up with even higher numbers! As the report is work in progress, the numbers are likely to increase as more policy areas are added to it.

Europe has many benefits apart from the economic added-value. But the hard facts give pro-European forces a great basis to defend Europe. More importantly, with the rise of Eurosceptic parties in the European Parliament, the report suggests concrete areas in which the European institutions should channel their forces to really make a positive contribution. Especially this trans-institutional consensus, based on the findings of the report, might make the difference. Jean-Claude Junker has already taken up some of the report’s recommendations and tuned his new Commission to be more result and outcome oriented.

A lot will need to change in the next five years. The ‘Mapping the Cost of Non-Europe’ report gives us concrete ideas about what it will be. In the end, this will be what the citizens can judge the institutions’ performance on.

Should you want to read more about the Costs of Non-Europe, find the full report here and our photo album here.