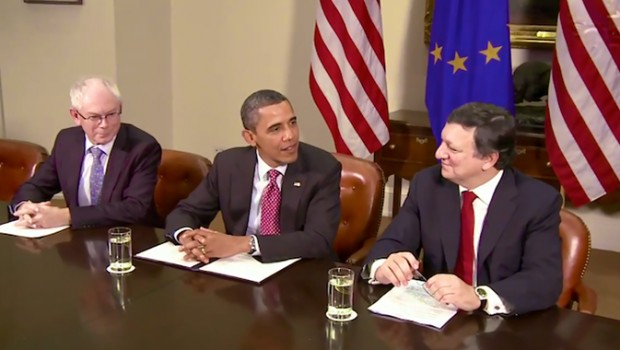 Tyson Barker, former Director for transatlantic relations at Bertelsmann Foundation, now at the US Department of State, is widely regarded as one of the most relevant experts on the relationship between Europe and the US in the world. UNITEE contacted him before his change of job to know more about this very important relationship, both from the economic and the political point of view.

According to some analysts, the United States could be a role model for the EU in its way towards a more efficient federal system. Do you see such a process as feasible? And what can actually the US teach Europe?

I think there are lessons on both sides. Obviously, the European Union and the United States are completely different systems, with different rules and different histories. That said, there is a number of potential lessons that the EU could get to inform how its integration process is developed in the future.

In particular, I identify three main points: the first one is the so-called ‘Hamiltonian moment’. When the United States was at a crossroad, in its early development, one of the main decisions taken by the first Treasury Secretary Alexander Hamilton was to centralize the assumption of the huge debt of all the states, hugely increased during the War of Independence, and the establishment of the Federal power to tax. In Europe, today it is a very contentious issue; just think of the questions around Eurobonds. That’s why I believe that the US experience could serve as a model: if you look, on an historical basis, to the way the US functioned prior to Hamilton mutualisation and how it functioned after, you can see that there were gains in efficiency.

The second aspect consists more on how the system is held together: how to create a greater common political culture within the EU? In the US, for example, we have directly elected officials. The effect of that is highly personalized elections. In this way, the population has a much stronger connection to the political process. The EU is starting to make small steps towards such a situation, but it takes time for them to create a strong political culture: it is not going to happen in two weeks!

The third thing that I would like to point out is the use of language. With that I don’t mean English, French or German or else; I refer more to how things are defined in public discourse. For example, the term ‘Commission’ intentionally obscures the function of the European Commission, which is essentially to be the ‘European Government’, with actual executive functions. So, why isn’t it called like that, or ‘European Ministry’? I think there is a clear desire to hide the function.

All of those are areas where Europeans could learn something by looking at the US. But Americans also can learn a lot of things by looking at Europe. Ours is a mutual inspiration.

Talking about the relationship between the US and the EU, an anecdote comes to mind: in the 70s, when in need to discuss an agreement with Europe, former Secretary of State Henry Kissinger reportedly asked: “Which telephone number should I dial to call Europe?” Has something changed today in the way the US look at the EU?

We live in an age that is very different from Kissinger’s. Today we do not need telephone numbers anymore; we have smartphones. And in that respect, we can look at Europe as a smartphone: we have multiple apps for everything. When we are looking at security policy, there are countries we are cooperating with more closely; we can look in the same way at trade policy and economic policy. We have a much more sophisticated approach to Europe than a blunt telephone: we have enough tools at our disposal to do everything we want in the most efficient way, in different fields.

Europe is very important for the US. Sometimes, obviously, the US is a very pragmatic, results-oriented policy-making actor, while the EU is usually more process-oriented: some of the frictions that occur from time to time between the US and Europe are due to that difference of behaviours. Of course institutions building is very important, but you have also to deal with the problems at hand and find solutions. You can’t always just talk about processes: you also have to talk about outcomes.

Let’s talk about the TTIP, the Free Trade Agreements which is being negotiated in these months: what does the US want from the EU?

I think that the TTIP is a kind of vehicle for a new recognition of the US-European relationship, and this will actually be the most underreported rebalance in the Obama Administration’s foreign policy. A relationship that traditionally was based on security, where NATO was the primary actor, now is moving towards a more economic-centered approach.

This indeed will have foreign policy repercussions as well. First of all, it gives both sides an economic relevance that will be a competitive advantage in the 21st century. Second, it is the only way the US and Europe can address and accommodate rising powers like China and Brasil. And finally, it is also a way to reignite interest in the multilateral trade order.

So, there are huge strategic underpinnings of this agreement. And it is not a coincidence that the former US Ambassador to the EU has called TTIP “an economic NATO”. Its ambition is to be for economics what NATO has been performing in security policy for the last 60 years.

TTIP
The Transatlantic Trade and Investment Partnership (TTIP) is a proposed free trade agreement between the European Union and the United States.
UNITEE
UNITEE represents entrepreneurs and business professionals with a migrant background, most of them of Turkish descent, and whom we refer to as ‘New Europeans’. http://www.unitee.eu/