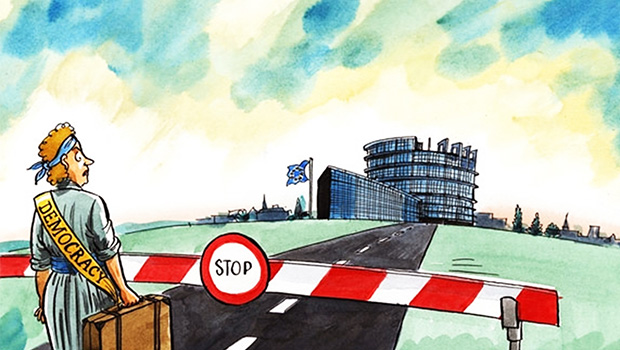 The concept of democracy has evolved into a complex system of politics and governance, from the assemblies of eligible citizens in the ancient city-state of Athens (direct democracy) to the plenary sessions of Members of the European Parliament who represent their constituencies in Brussels and Strasbourg (representative democracy).

After more than a millennium of changes, the essence of democracy remains the same: dêmos + kratos, “rule of the people”. Power to the people. But is this still the case in modern-day Europe?

What is ‘Democratic Deficit’?

The democratic deficit debate in the EU began in 1957 with the geographic and functional enlargement of the EU, or then called European Economic Community (EEC). It intensified during the most recent financial crisis with the rise of Euroscepticism. But what is this “democratic deficit”?

Democratic deficit is a very vague yet often utilised concept that has something to do with the lack of democratic legitimacy. It was formerly used to criticise the European Parliament in the 1970s since, at that time, MEPs were not elected by the citizens.

Today, the argument is that the EU has a democratic deficit due to a supposed lack of transparency and accountability in its institutions, the complexity of the decision-making process, and its excessive legislative power, leaving no room for the voice of European citizens.

Despite the very first European elections in 1979, voter turnouts have been low and continuously decreasing, although this year’s election saw a slight increase at 43,1%. This is the irony of democracy in Europe.

Also, according to an article from The Economist, most of the issues that interest European citizens are in the care of national governments, such as education and health. The EU, on the other hand, mainly handles regulatory and legislative issues that many citizens do not understand or are not informed about. Communication is lacking.

The locality which people consider their home is the primary basis of citizenship and community for many Europeans. This is where the sense of belonging blossom, a feeling many have at the local and regional level but not at the European level. Europeans do not often regard themselves as “Europeans”, but as citizens of a country, region, or even the city they live in.

The need of having a more direct and local approach to democracy is becoming more and more apparent in Europe today. Representative democracy through MEPs is no longer enough due to the widening gap between politicians and citizens and the rise of Euroscepticism. Many citizens now doubt whether their individual voices truly matter to the EU institutions, especially to the European Parliament, or not.

The Council of Europe (CoE) along with local and regional authorities celebrate the European Local Democracy Week (ELDW) this year from 13 to 19 October in different EU countries.

The week-long celebration through different local events and activities is aimed at connecting MEPs and local officials with their constituencies on a more direct way. It is also used to inform European citizens about how the EU works at a local, regional, national, and international level and about the available opportunities for them to take part in the decision-making process in their respective locality.

Aside from CoE’s focus on promoting local democracy and citizen participation, the Committee of the Regions (CoR) believes that “going local” is one of the EU’s best options to communicate Europe to its citizens and to close the gap between politicians and the people.

The CoR’s recent study on the communication potential of local and regional authorities concluded that “the EU needs the active participation of EU citizens in EU elections in order to strengthen its legitimacy” through communicating effectively the value of the EU and mobilising them to vote.

Although it argues that there is still a lack of willingness and commitment from local and regional authorities, where many are reluctant and even indifferent in supporting the Union’s information campaigns, especially during elections. There is also a lack of knowledge on what should be communicated, thus a lack of interest from citizens.

Communication is key. It could be the answer to the existing democratic deficit more and more European citizens perceive, which makes them increasingly sceptical about the Union and what it stands for. Where better place to start the process of communicating than at the home base?

Informing people and encouraging them to become active citizens at a direct and local level can lead to more citizen participation within the EU agenda and an enhanced practice of democracy where the people are given back the power over their future. Although this task is not easy. Many changes at home have yet to happen. For now, let us wait for the next train to Strasbourg.

Share the post "Is there or isn’t there a democratic deficit in the EU? Closing the Politician-Citizen Gap through Local Democracy"

Council of Europe
It is an international advisory organisation that advocates for cooperation between Member States in terms of human rights, legal standards, and democratic development.
Enlargement
After the fall of the Berlin Wall in 1989, enlargement was made a core EU priority. As of 2014, the EU is now composed of 28 Member States after seven successful rounds of enlargement. Five candidate countries have yet to become members: Iceland, Macedonia, Montenegro, Serbia and Turkey.
constituencies (Lisbon Treaty)
The latest institutional Treaty of the EU. It reformed the structure of the EU to make it more democratic and efficient. Signed in December 2007 in Lisbon, it entered into force in January 2009.
constituencies (Internal Market)
The geographical area across the EU where you are free to live, work, study, do business or retire… Thanks to this single market, you can also enjoy, from home, a wide variety of goods and services coming from all over Europe.
constituencies (Eurosceptics)
Those who criticize the European Union (EU) as being too bureaucratic and/or undemocratic, or even not viable. Some of them actually strongly oppose the deepening and widening of the EU.
constituencies (European constituencies)
The electoral areas of the European Union. Most Member States form a single constituency, while Belgium, France, Ireland, Italy, Poland and the United Kingdom are divided into several ones. If you live there, check out which constituency you belong to in order to find your representatives.