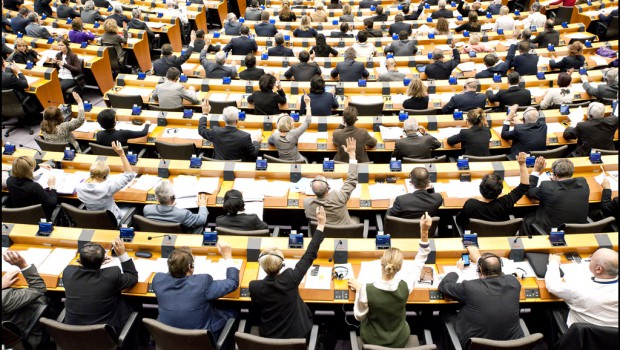 Have you ever wondered what “MEP” stands for? Take a guess: there are 766 of them; they come from all over the European Union and spend their time between Brussels (Belgium) and Strasbourg (France). If you get to attend their monthly assembly, the so-called « plenary session », you will witness them sitting in a semi-circle, pressing buttons, pointing up or down with their thumbs, and raising their hands or arms regularly. This mysterious choreography is actually how they pass laws that affect the life of more than 500 million European Union (E.U.) citizens.

Their agenda is defined according to the parliamentary calendar: they work in Brussels from Monday to Thursday, three weeks in a row, and spend the fourth week in Strasbourg (12 plenary sittings per year in total). The rest of their time is then devoted to maintaining contacts with their constituents. Elisabeth Morin-Chartier, a French MEP representing the Grand Ouest constituency (an area of more than 27, 000 km², counting around 3 million inhabitants), estimated that, between 2009 and 2012, she spent 4,000 hours in trains, planes or by car.

Members of the European Parliament are assisted in their mission by a team of assistants, usually 2 working in Brussels and 1 directly in the constituency. These officers must be skilful, as they take on various roles: they can serve as political and communication advisors, secretaries, or even tour guides for visitors. “Logistics duties are quite a challenge. In our office, we receive up to 300 emails a day!”, admitted Sébastien Richard, Parliamentary Assistant since 2005, when he visited UNITEE as part of our “Inspiring Professionals of the Month” program. He nonetheless concluded that “the diversity of tasks is what makes the job attractive.”

The power conceded to the Members of the European Parliament has significantly grown over time. Initially a forum for debate, the European Parliament gained legitimacy in 1979, when the direct universal suffrage was introduced. The entry into force of the Treaty of Lisbon in 2009 has then made it an equal partner to the Council of Ministers.

One should therefore not underestimate the importance of the 2014 European Union elections. And as Isabelle Durant, a Belgian MEP for the Green/ALE political group, stressed during our interview: “It is one thing to elect Members of the European Parliament, but EU citizens should also regularly keep track of what their representatives are actually doing!”. To do so, EU citizens dispose of various tools such as the European Parliament’s website, the MEPs’ personal websites or social media, as well as the public database VoteWatchEurope, which allows you to monitor the votes of any MEP.

So, if you care about who will decide on how many hours you are required to work, how much you should pay for roaming, or on bigger issues such as climate change, then do not forget to vote between 22 and 25 May 2014, and read more articles on our Blog to discover everything you ever wanted to know about the EU elections!