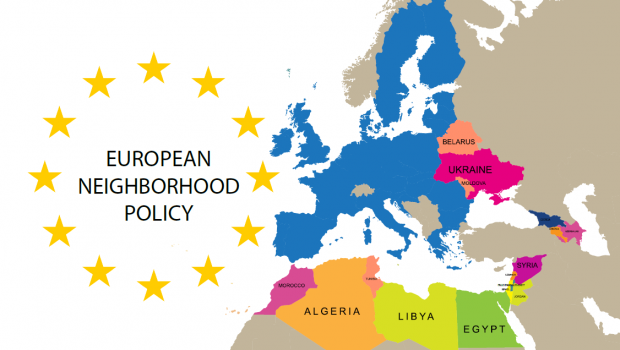 To foster security, stability and prosperity in its Neighbouring countries, the European Union launched the European Neighbourhood Policy (ENP) in 2004. Since then, there have been reviews of these policies, the last one was presented in November 2015 and the previous one in 2011. The countries concerned by these policies are separated in two main groups. It is composed on one hand by the Southern countries, namely Algeria, Egypt, Israel, Jordan, Lebanon, Libya, Morocco, the Palestinian Authority, Syria and Tunisia and on the other hand by the Eastern countries, namely Armenia, Azerbaijan, Belarus, Georgia, Moldova and Ukraine.

The review of 2011 followed the “Arab Spring” and supported EU’s partners who were undertaking reforms towards democracy, rule of law and human rights reforms. The review of 2015 favours the same values but the format is a bit different. The European Commission started by consultation sessions in order to come up with more effective proposals. In total, the Commission has consulted more than 250 organizations, individuals and think tanks. This external participation enables the European Commission to better understand remaining issues and write more pragmatic policies, changing some principles, scopes and instruments.

However, the 2015 review continues to use previous methods such as the “more-for-more” principal which was developed in the 2011 review. Actually, the European Union prioritizes stronger partnerships and offers greater incentives to countries that make more progress in their democratization process. The importance of human rights and rule of law is essential in EU ethics and Europeans promote these values to make them universal.

In terms of structure, the review now presents a four years strategy with annual meetings, a strategy that will last until the end of President Juncker’s mandate with clearer targets. All in all, these strategic changes yield in a more transparent outcome.

The 2015 review is based on four main priorities: new areas of focus, differentiation, flexibility, and ownership and visibility.

New areas of focus: The review wants to limit ENP activities on decisive areas of focus. These new areas are regrouped in five main pillars:
1) a greater focus on economic development and job creation;
2) a bigger cooperation on energy supply;
3) a coordinated security;
4) a better management of the flux of migration;
5) an emphasized dialogue with the neighbours of the neighbours.

Differentiation: Each country now benefits from a clear and individual approach. The review also acknowledges countries individual interests. It shows the importance of a distinct and more pragmatic guidance for the following years.

Flexibility: Johannes Hahn, Commissioner of the ENP, emphasized how flexibility “is a must”, especially in time of imminent “crisis”. Thus, in this review, there are more possibilities of shifting budgets and adapting policies in case of need but also part of the budget can be used as a reward for countries that achieved good reforms.

Ownership and visibility: European’s personal interest is now emphasized and it is explained how developing peace, stability and prosperity with a focus on political, economic and security coordination in its neighbouring countries is in EU’s personal interests. ENP now focus more on bigger projects and provide more “visible” money, instead of the “invisible” funding. Europe should not be at the centre, and stronger partnership is imperative.