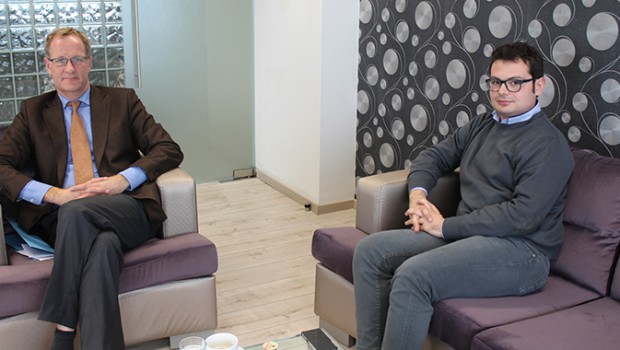 The EU has been experiencing, for the last years, the worst crisis of its existence. Efforts have to be concentrated on re-defining the existing structures, without losing what we have achieved so far. In this rather gloomy environment, is it realistic to think about enlargement as a feasible policy?

That is the debate between deepening and widening. But it is a debate that is as old as the EU itself. It’s been there from the start: the first discussion was if the UK was going to be in or out, then the EFTA countries. And we decided to proceed with the deepening AND the widening together. I wouldn’t see why this should stop. If you look at today’s EU, there are many countries which have recently joined. This idea that it is possible to go back, to return to the original nucleus, is rather silly: it has never worked, I don’t see why it would work now.

Furthermore, all the 28 Heads of State are saying that we want to continue the enlargement process. Actually, as far as enlargement is concerned, it has very often been called ‘the most successful EU foreign policy’. This is definitely the case when you look at the Central- and Eastern European countries that entered the EU in 2004: the way the fall of the Soviet Union was absorbed was a fantastic success. One of the reasons there is still growth in the European Union is thanks to these new countries.

This doesn’t mean that enlargement has to take place at all costs. In fact, there will be no enlargement for some years now: Montenegro started last year, Serbia will start early 2014. On average, the experience of former enlargements tells us that it will take seven-eight years for new countries to join the EU. We won’t have a new enlargement before 2019, 2020, at the earliest. Not because we decided that we don’t want to enlarge, but because none of the candidates are ready.

So, we now have the time to look at the internal mechanisms and reforms. The EU is on a constant evolution: I’ve been working in Brussels since 1991, so it’s quite a long time, but I’m still amazed and impressed by how quickly the EU has changed. I never thought that we would be where we are today. Even if in crisis, the EU is still an enormous success, looked at with envy by a lot of countries in the world who are admiring our ability to work together despite our differences. I personally think that we ourselves are far too gloomy about our own achievements; we are much better than we think we are.

Looking closely at some specific cases, let’s start with Turkey. When media in Europe and in Turkey talk about the accession process, it is possible to identify two views: in Europe, fear dominates, while in Turkey there is more a sense of “being robbed of something we deserve”, talking about the halt in negotiations. How can this general mentality be changed?

First of all, the fact that you are a candidate doesn’t necessarily mean that you have an automatic right to enter the EU: you have to fulfil all the conditions. All parts of the negotiations are based on their own merit, so Turkey has to comply with the rules and the standards of the EU. Which it is doing in certain areas, but not in all of them.

Also, on the procedural side, we require the unanimous support of all 28 Member States: for this reason, one State is enough to block the whole process. Take this into account: there are 35 chapters that must be completed, opened unanimously and closed unanimously. And in between, there are different steps that have to be taken. For this reason, we have calculated that every single member of the European Union can stop the process 135 times. And at the same time, an unwavering support from the Turkish side is fundamental for the process to be successful.

For us at the European Commission, the only thing that counts is that we have a very clear mandate by all Member States. If the Member States tell us that we have to stop, I will personally regret that, but we will have to do it.

Many voices inside the EU, among whom Enlargement Commissioner Stefan Füle, have hailed the recent publication of the so-called “democracy package”. The recent opening of chapter 22 in the negotiation talks has been seen as a direct consequence of this. What do you answer to this position?

Let me first say that the opening of Chapter 22 is very good news, because it’s the first chapter being opened in three and a half years. So, it breaks this terribly negative spiral in the accession negotiations where nothing happened. This proves that the Member States want to continue the negotiations. But the political decision by the EU side was taken in June, in the middle of the riots in Taksim Square and Gezi. That is extremely important, because it shows that, in spite of those unrests, Member States were ready to continue negotiating. If somebody had been looking for an excuse to stop the talks, the riots were in fact a gift from heaven: you could have stopped them quite easily. Nobody wanted to do it. On the contrary, they were all looking for ways to continue.

Now, it is true that it is just a chapter. There are a number of chapters blocked over the Cyprus issue and others blocked by France. But we are optimistic that other chapters will be opened soon: we are having extensive talks with France, and it is possible that things may positively evolve very soon. And concerning Cyprus, the election of President Anastasiades, who made rapprochement a central part of his agenda, has made the possibility of an agreement more realistic. We obviously support it very intensively and we hope it comes to an end.

Another priority area for enlargement are the Western Balkan countries. It is an area that twenty years ago was overwhelmed by a terrible ethnic war. Today, Croatia and Slovenia have joined, while on the other side, there are situations that are a bit harder, such as Kosovo and Bosnia-Herzegovina. Is it realistic to think about the whole region entering the EU, one day?

I think they will all become members of the EU. There are eight countries in the Western Balkans. Two of them, Slovenia and Croatia, are already in; the other six are in different groups but all of them, in 2006, have been given a possibility to enter. But of course the speed and the timing of the accession are totally different things.

In this framework, the first to join will be Montenegro, with whom we are negotiating, while Serbia will start the process in early January. Then, we have Albania, whom the Commission has just proposed to give the candidate status. Macedonia is already a candidate and we have now for the fifth time proposed to start the negotiations. But in its case, the main difficulties are due to the name of the country and to bad neighbour relations with Greece.

The worst cases are those of Kosovo and Bosnia-Herzegovina. Kosovo is slowly moving forward; there were elections at the beginning of November, which were held for the first time in the Serbian-populated north of the country. But the violence that erupted in some towns of the area tells us that there is still a lot to be done.

For what Bosnia Herzegovina is concerned, sadly, progress has been very slow. Of course, the country is in a complicated situation: it has a very complex constitution, drafted in 1995 to stop the war, which makes it very difficult to reach quick decisions. But our line is that the Constitution doesn’t have to be an excuse: what is more problematic is the leadership’s lack of political will.

Anyway, we are doing a lot: we are investing in the rule of law, in infrastructures, in creating viable States. In those countries, though, crime is endemic and that is our priority: they will not enter the EU until they are cleaned up. This has to be very clear: we have learnt from previous enlargements that we have to be tough before they come in, and make sure they make all the necessary efforts.