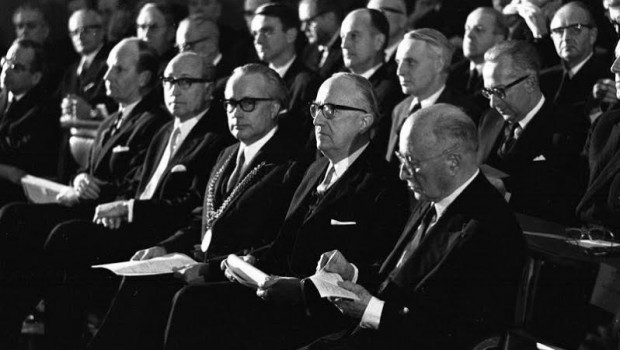 It is a difficult time for the European Union (EU) as it faces a social, political and economic crisis with high rates of unemployment (especially among youth), increasing socio-economic inequalities, a weak political unity, etc. Euroscepticism is rising and the European dream seems to be disappearing from people’s minds.

The European elections are only four months away and the question therefore is: how to revitalise the European Dream?

Should schools focus more on teaching the technocratic and legislative procedures of the Union? Should we revise the way media reports on EU affairs? Are politicians communicating enough with citizens? Should national governments transfer more power to the EU institutions?

All these questions will have to be addressed. But we already have one answer, which was found already 60 years ago by a group of leaders who inspired the creation of the European Union, the Founding Fathers.

To revitalise the European Dream, we should remind EU citizens where it all started and return to the ideals at the heart of the European project.

Contrary to what we could think, the Founding Fathers were not all statesmen. Some were lawyers, businessmen, resistance fighters, etc. However, there was a base of unity within this diversity: they all experienced the horrors of war and shared the same ideas, a peaceful, united, stable and prosperous Europe.

The aim of the European project was to end the wars between neighbours and establish a cooperation system between populations. Political unity was the ultimate long-term aspiration.

And since the Schuman Declaration in 1950, Europe has lived its longest period of peace.

Would you like to know some of them better? Then check out our infographic as well as the list below! 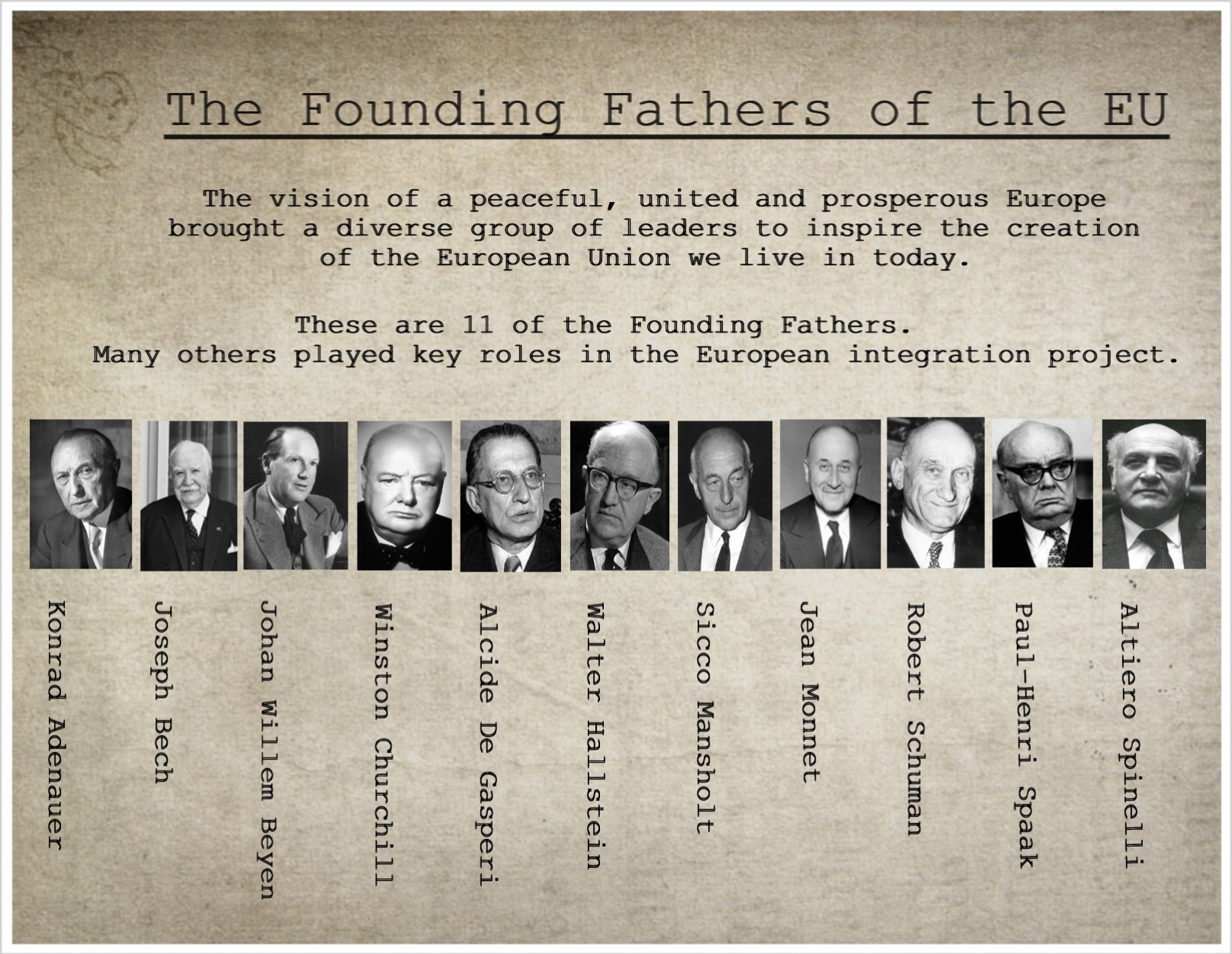 Robert SCHUMAN, born in Luxembourg, was lawyer and French minister from 1948 -1952, and President of the European Parliament from 1958-1960. As a result of his experiences in the Nazi Germany (he was deported to Germany in 1940), Schuman recognised that only a lasting reconciliation with Germany could form the basis of a united Europe. In cooperation with Jean Monnet, he drew up the Schuman Plan.

Konrad ADENAUER was the first Chancellor of the Federal Republic of Germany from 1949-1963. The basis of his foreign policy was the reconciliation with France. In 1963, together with the French President Charles de Gaulle, he signed the French-German Treaty of Friendship (Elysee Treaty), a key moment in the history of European integration. Other achievements: Germany becoming part of the Council of Europe, foundation of the European Coal and Steel Community and NATO’s membership.

Winston CHURCHILL was a former army officer, war reporter and British Prime Minister from 1940-1945 and from 1951-1955. Churchill played a key role in the anti-Hitler coalition. Later on, when defending Europe’s cause, his aim was to eliminate European ills of nationalism and war-mongering. Winston Churchill was also a painter and writer receiving, in 1953, the Nobel Prize for Literature.

Alcide de GASPERI was, after the Second World War, the Italian Prime Minister and Minister for Foreign Affairs. He was emprisonned from 1926 – 1929. Through his contritbutions to the Marshall Plan, Alcide de Gasperi supported the fusion of Western Europe. He also promoted the creation of close economic ties with other European countries and supported the Schuman Plan.

Jean MONNET was a French economic advisor and politician. He was a unique deal-maker who negotiated many international agreements including the most important one, the Schuman Declaration. He was the main inspiration behind it. Jean Monet was also an international businessman, financier, diplomat and statesman. He was never elected to public offices. However, thanks to his ability of argumentation and persuasion, he convinced other European statesmen to foster the European integration project.

Walter HALLSTEIN was the first President of the European Commission from 1958-1960, focusing on the creation of the Common Market. The integration advanced significantly during this period. Before that, he held the position of Secretary of State in German Foreign Ministry.

Paul Henri SPAAK was part of the Belgian Army during the First World War and spent two years as a German prisoner. As a Foreign Minister during the Second World War, he failed to preserve Belgium’s neutrality and went into exile to Paris and London. After the liberation of Belgium, he served as Foreign Minister and as Prime Minister, and leaded the formulation of the Treaty of Rome.

Altiero SPINELLI was an Italian politician, leader of the proposal for a Treaty on a federal European Union (Spinelli Plan). He joined the Communist Party at the age of 17. He was imprisoned by the Italian fascist regime from 1927-1943. Spinelli was advisor to De Gasperi, Spaak and Monnet and created the Institute for International Affairs in Rome. He was a member of the European Commission in the area of internal policy, and later on, he became Member of the Italian Parliament for the Communist Party, before being elected for the European Parliament in 1979.

“World peace cannot be safeguarded without the making of creative efforts proportionate to the dangers which threaten it.” – Robert Schuman

“History is the sum total of things that could have been avoided.” – Konrad Adenauer

“We must build a kind of a United States of Europe.” – Winston Churchill

“We are not forming coalitions of states, we are uniting men.” – Jean Monnet

Council of Europe
It is an international advisory organisation that advocates for cooperation between Member States in terms of human rights, legal standards, and democratic development.
Spinelli Plan
It provided a basis for the Single European Act of 1986, which opened up the national borders for the common market and for the Maastricht Treaty of 1992 forming the EU.
Elysee Treaty (French-German Friendship Treaty)
Signed on January 22, 1963, it called for reconciliation between the two former ennemies by etablishing regular consultations on important issues.
Marshall Plan
An American initiative consisting of an economic aid program for the reconstruction of European economies after the Second World War.
Treaty of Rome
The Treaty of Rome was one of the three treaties establishing the creation of the European Economic Community, which would later become the European Union. It was signed on 25 March 1957 by Belgium, France, Italy, Luxembourg, the Netherlands and West Germany, and laid down the initial provisions for a common market, a customs union and common policies.
Schuman Plan
Presented by Robert Schuman on 9 May 1950, it proposed the creation of a European Coal and Steel Community, whose members would pool coal and steel production. This would make war between France and Germany "not merely unthinkable, but materially impossible". The 9 May 1950 is considered to be the birth of Europe.