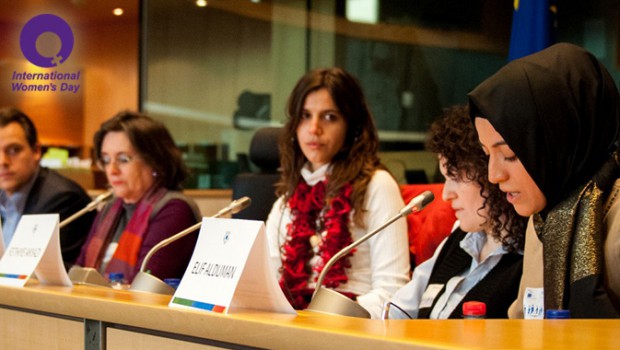 “We should learn how to live together” stated Elif Alduman, active member of Golden Rose. This is exactly what Golden Rose intends to communicate to the world: diversity and multiculturalism are strong qualities for society that can only be useful if we first learn how to live and work together.

Golden Rose stands out as a local women’s association that has grown beyond what its founders had in mind. Starting off with eighteen founding members, it now counts more than two hundred members. The association not only promotes civil responsibility and diversity but, most importantly, advocates the incorporation of women into the workforce.

Elif Alduman is determined to underline the importance of active women and she insistently encourages them to be so, as she believes that women play a key role in achieving a more integrated society.

When was Golden Rose created and what are its objectives?

Golden Rose was founded in April 2009, but its official opening took place in June 2009. The objectives of our association are mainly the introduction of women to the workforce, making them active, and the promotion of civic responsibility. Golden Rose fights for a multicultural environment in which everyone can learn from each other and works to share their ideas and to make people realise that women from different backgrounds have many different qualities which are all equally valid.

What does the name “Golden Rose” mean?

“Golden” emphasises how women are valuable; the most precious metal is gold, and the most precious thing is women. Whereas the “Rose” is a flower. We think that everyone likes flowers, and the rose is also the symbol of all flowers; we could say, it is the best one.

Who are your members and who can be a member?

Our doors are open to everyone, regardless of gender, age, religion or education. For this reason, we have a very diverse membership including housewives, professionals and students; these are all people from different backgrounds, speaking various languages.

This is vital, because this way we get different perspectives and views, and we also have the opportunity to reach out to other cultures. Occasionally, it is the people who come to our programmes, meetings or other activities that end up becoming a member.

What is Golden Rose’s vision of the role of women in the society?

Women have to be active and this is possible. In my opinion, women play a key role in society; they are the core of cultural integration, social cohesion, and participation in civil society, which match our motivations. So we try to implement them as much as we can. We think that women are a beneficial asset to society and people should be aware of this.

Women have a role in everything that goes on in our society. Here in Belgium and particularly in Brussels, we have many different cultures, but most of them do not open up to others. We consider women to be more prone to initiate a conversation, which make them essential for integration.

Do you promote women’s professional development and entrepreneurship? How?

Yes, we try to encourage women to participate in the labour market and show them that it is possible to have a career and children at the same time. It is difficult but not impossible. This is why Golden Rose organises seminars and roundtables where we gather entrepreneurs, both male and female. In addition, we created a reserved place for their children, so that they are able to see by themselves that it is possible.

It is also important for us to clarify that many women are already entrepreneurs. However, they are commonly left out when they run their company together with their husband. Thus, we want to raise awareness and give women the recognition they deserve.

It seems that multicultural relations are one of your core issues? Why is it so important to you? Do you think women have a role to play in this?

Belgium, and especially Brussels, stands out as a multicultural society since fifty per cent of the population of Brussels comes from other cultures. For example, we are Belgian, we have been here for fifty years already, but we have a Turkish background. Nevertheless, we do not want to focus solely on Turkish women and people, we want to tell other cultures in Belgium that they are Belgian citizens too.

Why should we live apart? Everyone can contribute to society, we do not have to be the same but we can learn from each other. We can come together, discuss together, and work together to solve Belgium’s issues.

Could you share a success story with us? For instance, a woman who you helped in her professional development?

We do not have an anecdote as such, though we did have a doctorate student once who came from Turkey to study in Brussels but did not know many people. We had various student members with whom she got in contact and we all helped her to get settled. Even though she didn’t think she was going to accomplish her goals, later on she succeeded in her career and is now one of our members.

We have also supported lots of people who were looking for a job in Brussels. In 2013, I assisted three women in this respect and they are working at the moment. Furthermore, one of my co-workers worked in a bank, has two children, and is now a volunteer at Golden Rose, so we say anything is possible.

Focus: Roundtable on reconciliation of private and work life.

Amongst a wide variety of activities, such as weekly seminars, receptions and trips, Golden Rose organises roundtables to discuss current issues in women’s lives. For example, the roundtable “Entre enfant et carrière, faut-il choisir?” (“What to choose between having children and pursuing a career?”) was organised in order to debate women’s family and professional life balance. Guest speakers included Céline Fremault, Belgian Minister and mother of four children.

Multiculturalism
Describes a community made of multiple cultures. It can refer to the cultural diversity in the demography of a certain place or organization, e.g. schools, businesses, neighbourhoods, cities, or nations, or to ideologies or policies that promote diversity.
Entrepreneurship (Entrepreneur)
A person who operates a business and takes on many risks to do so. Entrepreneurs are also innovators, coming up with new ideas and interesting solutions. New companies create more than 4 million new jobs in Europe every year.