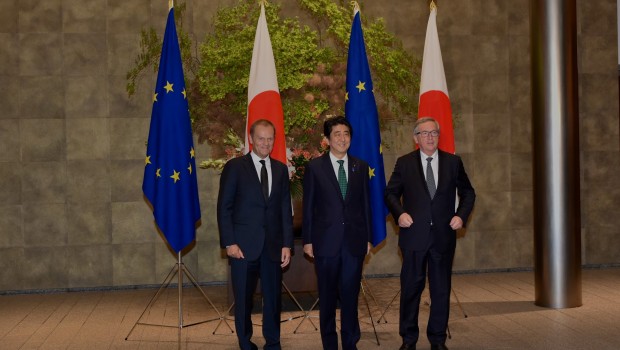 The negotiation of EU-Japan FTA (Free Trade Agreement), one of the Mega-FTAs that would cover one-third of global GDP, is now about to be concluded. Negotiators of both sides are willing to achieve this goal within early 2016, and the latest round of negotiation will take place in February.

Since the kick-off of negotiation in March 2013, progress has so far been made in several sectors including trade in goods, trade in services, investment, intellectual property rights and government procurement. On the occasion of the conference held in January, Ambassador Keiichi Katakami has stated the Japanese determination of further contribution to global challenges, and the necessity to re-discover and re-boost strategic relationship between the EU and Japan.

Initially, though, leaders of Japan and the EU intended to make an agreement within the year 2015. TPP, which composes another side of Mega-FTAs has been concluded in last October, and officials expected the positive spillover of the TPP conclusion to the EU-Japan FTA. In reality, however, a gap of thoughts between two sides is still persistent and profound and arguments of both sides continue to be parallel without finding any compromises. Mauro Petriccione, the European responsible for the FTA negotiation, has admitted that more needed to be done although the negotiation has been matured. Therefore, the mutual compromise in disputed sectors is the key to complete this FTA negotiation.

The remarkable progress has so far been made on the liberalisation of trade in goods. Japan already has low or zero import tariffs on many EU goods, that has agreed to eliminate 83% of its tariff lines. Therefore, the main focus of FTA negotiation is the elimination of non-tariff barriers(NTBs), particularly which preventing European companies from operating in Japan with exploiting fully of their potentials. Negotiators are mainly focusing on three sectors: automobile, agri-food and public procurement. 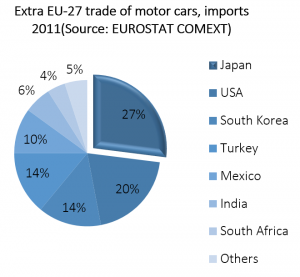 Some EU Member States are afraid of the expansion of Japanese giant car manufacturers that would be caused by the FTA. Meanwhile, European automobile exports towards Japan are limited because of Japanese specific regulations such as Kei(small) car concept or particular safety criteria. Compared with the tariff, this kind of NTBs is difficult to be abolished, actually, the EU-Korea FTA has already proved this fact. To avoid the FTA to be a one-way contract, European manufacturers are urging to make a balanced FTA and to make a level playing field for both exporters.

Unlike the automobile sector, agri-food industry can bring the most advantage for European producers due to Japanese dependence of food supply on foreign countries. European wine, ham, cheese and beer are on high demand by Japanese consumers. The negotiation is to ease Japanese regulations to imported foods and beverages. European negotiators are demanding to reconsider Japanese regulations on food additives, currently much stricter than the UN guidelines. For instance, most of the European beers cannot be labelled as beer in Japan, but another category called “bubbly spirit” which meets other price and tax criteria. It is essential for Europeans to ensure fair competitions in Japanese beer market. 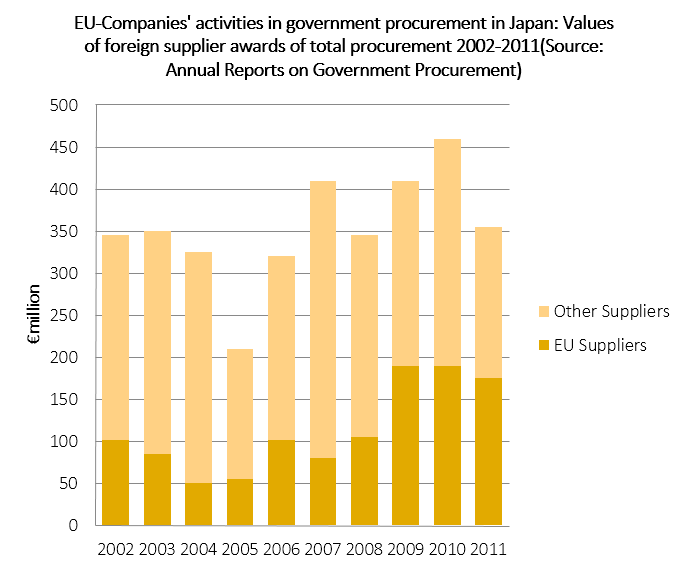 Further liberalisation of Japanese public procurement market is one of the main targets of EU negotiators. Especially Japanese railway sector contains a huge scale of the market where European enterprises are willing to participate in tenders. Although the market becomes more open to foreign bidders, obstacles still remain and it is far from fair competition. Japanese specific standard (JIS standard), language and lack of transparency are main obstacles for foreign companies. Japanese traditional practices prevail in this sector, that make the market invisible to foreigners. Therefore, the improvement of transparency is the first and foremost priority for European negotiators, as well as the harmonisation of Japanese standard to international standard, and eventually the integration of tenders information platforms.

Since the conclusion of TPP last year, EU-Japan FTA negotiation has been accelerating. Negotiators of both sides intend to use this momentum for the early conclusion, if not the negotiation might be deadlocked. They perceive the conclusion within early 2016 is fairly possible, the problem is the will to make their idea closer, namely the compromise.

The Japanese side intends to apply the TPP type agreement to this FTA, but it cannot be totally acceptable for the European side, especially the legitimacy of ISDS as a mechanism of arbitration in case of conflicts between investors and states. For Japanese negotiators, the card of negotiation is NTBs. Currently Japanese NTBs are too strict for European eyes, thus the elimination of these barriers as much as possible is the best tool for negotiation, instead of the total revision of TPP type agreement.

Regarding the political will, recently there are some inquiries on both sides. The EU Member States have been forced to reinforce their internal security passing through the tragedy of terrorist attacks inside their territory. Their neighbourhood is still instable and the overflow of migrants still going on. All of them causing the raise of xenophobia, that makes the FTA negotiation minor issue on the agenda. For the Japanese side, the economic recession after the boom of Abenomics threatens the support base of government. Particularly the resignation of economic and fiscal policy minister, Akira Amari, after his bribe scandal this January caused a shock to Abe administration, as Amari was one of the main figures of Abenomics as well as the chief negotiator of the TPP. Usually, a strong political dynamic can be seen in the final phase of this kind of major agreement, however, it is still doubtful if the moment for the EU-Japan FTA has come.

In conclusion, both EU and Japan have admitted that the entry into force of the FTA would benefit both economies and possibly work together on any global challenges. Due to the huge impact of this issue, the negotiation cannot be easily concluded. However, as Mauro Petriccione has said, the negotiation has already been matured. The last thing they need is another push to reach to a conclusion by using all of their cards for mutual compromise, and eventually a public support for the ratification of this agreement. 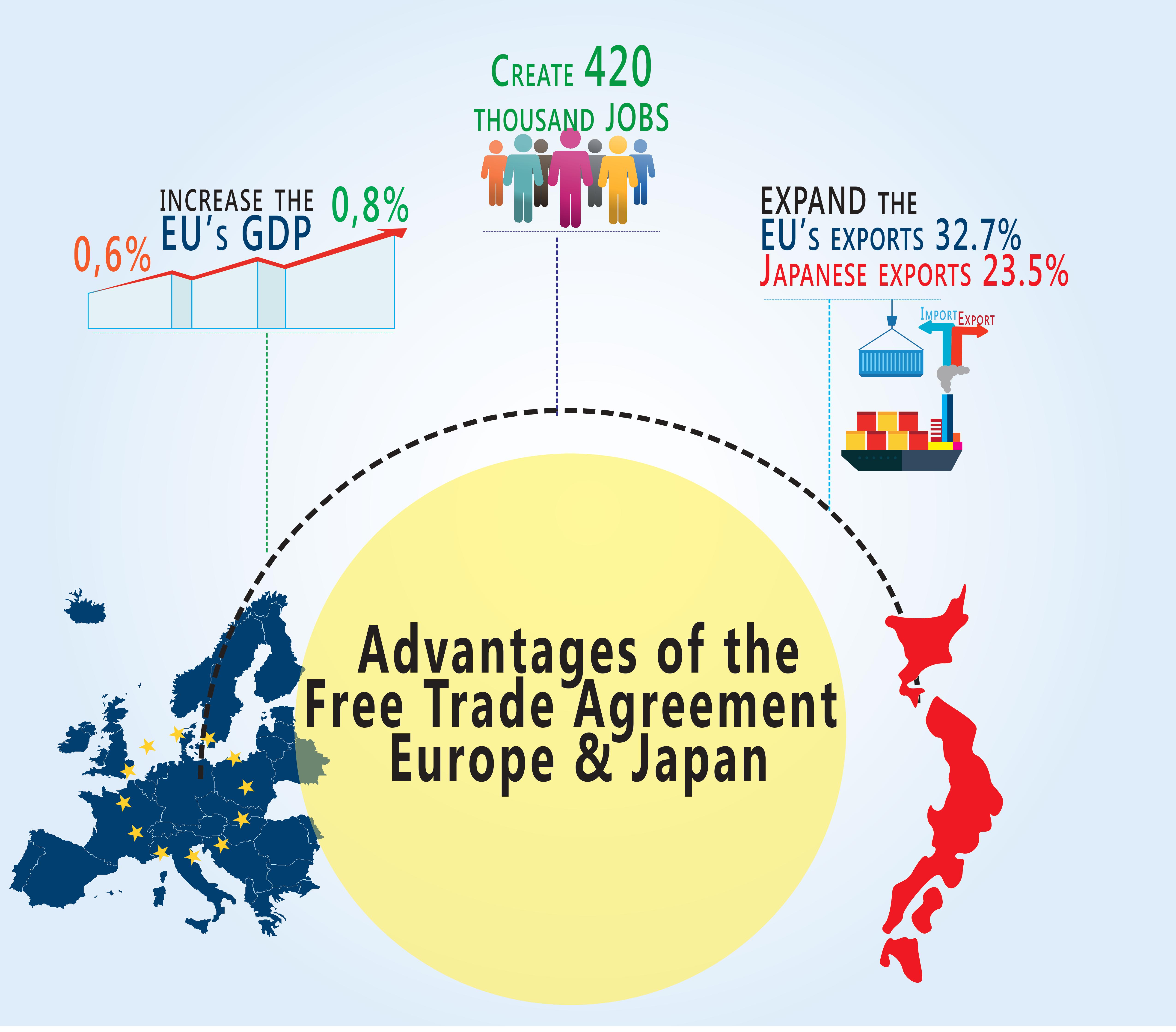 GDP
GDP estimates are commonly used to measure the economic performance of a whole country or region, but can also measure the relative contribution of an industry sector.
Fiscal
A term referring to the use of government’s spending and taxation to influence the economy.