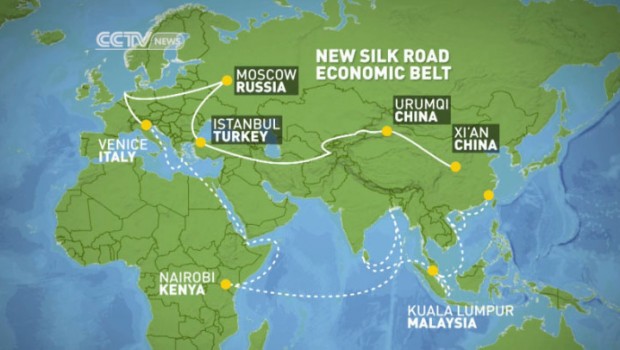 The Ancient Silk Road was a network of trade routes, established during the Han Dynasty (206 BC – 220 AD). It was connecting Changan (Xian) in China to Venice and the Roman Empire in the West. These roads not only built a network of trade but also facilitated the cultural exchanges between two big civilisations. The Silk Road lost its full functions around 1453 with the rise of the Ottoman Empire, whose rulers opposed the West. However, China has recently put forward a giant plan to revive the Ancient Silk Road.

This plan is a combination between the Silk Road Economic Belt and the 21st-century Maritime Silk Road, also known as The One Belt, One Road (OBOR) Initiative. It is a new international development strategy proposed by Xi Jinping, president of the People’s Republic of China. This initiative unveiled in September 2013, focuses mainly on deeper connectivity and cooperation among Eurasian countries.

The project calls for a deeper integration between Eurasian countries into a cohesive economic area through three main pillars:

Building infrastructure is more than simple physical infrastructure, it is also about the establishment of free trade areas and harmonization of technical standards for infrastructure. The promotion of exchanges should also vary from academics and students to culture and tourists. It is also about building people to people bonds, increasing cooperation, volunteer services, and media cooperation.

Cultural exchanges are very important in modern time, it enables people to create a mutual understanding which might boost economic development.

The “Belt” refers back to the Ancient Silk Road, it includes countries situated on the original silk road through Central Asia, West Asia, the Middle East and Europe plus additional ones. These countries are important for China external relations but sometimes, difficult to build long-term trustworthy relation.

The “Road” refers to a Maritime Road, a network of planned harbours and other coastal infrastructure projects aimed at investing and fostering collaboration in Southeast Asia, Oceania, Africa – especially Kenya- and the Mediterranean Sea.

Neither of these roads follows a clear and precise line geographically speaking, they serve more as roadmaps for how China wants to further integrate itself into the world economy and strengthen its influence in these regions.

This initiative encompassed more than 60 countries representing a third of the world’s total economy and more than half the global population. Behind the evident economic reasons of the OBOR project, there are also geo-political motives, such as an energy security for china when its partners are excluding it from strategic agreements or an opportunity for EU’s worldwide security strategy but also to stabilize the regions connecting Asia and Europe.

In order to completely benefit from the economic potential, China has to successfully manage two main upcoming challenges. First, the initiative triggers Sino-Russian relation as Central Asia is still considered by Russia as its own backyard. Indeed, Russia has already tried to promote its own plan of a Eurasian Economic Union. Secondly, China is novice in implementing building infrastructure in the Eurasian landmass and it might make mistakes. These mistakes could have a political and commercial impacts. Thus, these matters highlight the potential complications of the One Belt, One Road Initiative where the outcome mainly depends on the ability of Beijing to influence its implementation. If the project is successful, in the long-run, it has the potential to completely alter Central Asia economic landscape.

The OBOR initiatives are in the perfect timing to support a new openness to the world and an enhanced cooperation for further development. 2016 is also a crucial year since it will see the rise of concrete projects.