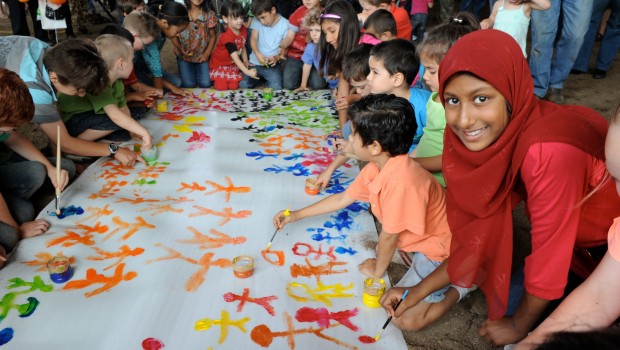 Home to 80% of the European population, European cities have a long history of receiving newcomers in. More and more migrants are choosing to settle in urban areas, making large cities the frontrunners in managing the diversity brought on by migration. Consequently, this means cities are also at the frontline of some of Europe’s most pressing challenges. From unemployment to poverty and exclusion, it is in cities that these challenges are concentrated, and in cities that solutions are found. They play a central role in making integration work, and can help shape effective national and European integration policies.

EUROCITIES represents the local governments of over 130 of Europe’s largest cities and 40 partner cities, governing 130 million citizens across 35 countries. Our work in this field is led by our working group on migration and integration, chaired by Helsinki, with Milan as Vice Chair.

In 2010, we launched our Integrating Cities Charter, a set of commitments for cities as policy makers, employers and providers and buyers of goods and services. It has been signed so far by 33 European cities, including 15 capitals. Through the charter, the mayors of some of Europe’s largest cities demonstrate the commitment of their cities to the integration of migrants and migrant communities, and to the promotion of well-managed migration in increasingly diverse cities. It also stresses the importance of ensuring equal access to services and the idea that a city’s workforce should reflect the diversity of the local population at all levels.

As part of our ImpleMentoring project, we developed the Integrating Cities toolkit on ‘Managing diversity and promoting equality in cities’ administration and service provision’ in June 2014. It addresses cities’ roles as employers, service providers and contractors of services for their local populations from external providers.

European cities all operate in different contexts, with very distinct roles and competences in some areas, such as education and labour market access. Some are constrained by national rules and policy frameworks or approaches, while others have to share responsibilities with relevant bodies across different levels of governance. Nevertheless, cities are eager to demonstrate their commitment, take leadership and engage in open and fruitful dialogue with migrant communities to change the way services are delivered or how employment policy is implemented.

In Barcelona, for example, a comprehensive interculturality plan adopted in 2010 is designed to ensure social cohesion whilst taking advantage of the benefits of cultural diversity. Diversity management relies on a proactive attitude, and the principles of equal opportunities and non-discrimination are embedded in Barcelona’s plan. The city authorities are also keen to promote the added value that cultural diversity offers to companies.

In most European cities, there are higher unemployment rates among migrants than established residents. Employment and training services are therefore essential for including migrants in society. Most cities work with agencies at different levels of governance, such as national employment agencies, to deliver these services. These measures help improve the migrant employment rate by strengthening skills and competences, particularly for those making the transition from school to work.

Furthermore, city administrations are often among the largest employers at city level. Cities can therefore set an example as employers, by committing to reflect the diversity of their populations, ensure equal treatment of staff and guarantee respect for diversity.

Reflecting diversity and promoting a diverse staff internally can be subject to diversity targets, which is the case in Helsinki, Munich and Oslo. It can be achieved also through anonymous recruitment: Oslo piloted this within selected city departments in 2010. It also launched a new human resources policy in 2013 to target imbalances in the composition of its workforce, especially in management positions and those requiring higher qualifications. Dedicated recruitment campaigns to promote migrant employment can also be a solution, and one that is being used in Tampere, which is promoting migrant role models in its internal and external communication, expanding the breadth of its recruitment channels, and opening up temporary vacancies.

Also public procurement is an important means for cities to address social inclusion and diversity issues. The Integrating Cities Charter encourages cities to apply clear policies on equality and diversity in their procurement processes for municipal contracts, fostering a diverse supplier base and ensuring migrant-owned businesses have equal chances of bidding for municipal tenders. The charter also aims to promote the benefits of diversity to businesses and service providers in the city.

Cities can use their diversity plans to set goals for equal access to services, and sub-contractors can contribute to these by enabling more migrants to access their services. Procurement and tendering policy can be used to ensure compliance with equal opportunities. Developing a wider supplier base means the range of providers is more likely to reflect the customers and clients they serve. It also leads to new employment opportunities for migrants in different fields of work.

Cities are busy promoting and designing new ways of conveying the principles of equality and diversity to their contractors. A vast majority of Integrating Cities Charter signatories apply these principles to their procurement and tendering processes, but developing a wider supplier base remains a challenge. More and more cities are using anti-discrimination clauses in municipal tenders, like Ghent and Malmo, while others have certifications and labels as preconditions for doing business in the city, which is the case in London, Manchester, Nantes and the Brussels Capital Region.

Our Integrating Cities Charter provides a framework for cities to realise their ambitions of reflecting diversity in all areas of public life and capitalising on its benefits. Through our projects, publications and continuous dialogue within the Integrating Cities process, our working group and the wider network, our members share ideas and knowledge that help turn their commitments into reality.