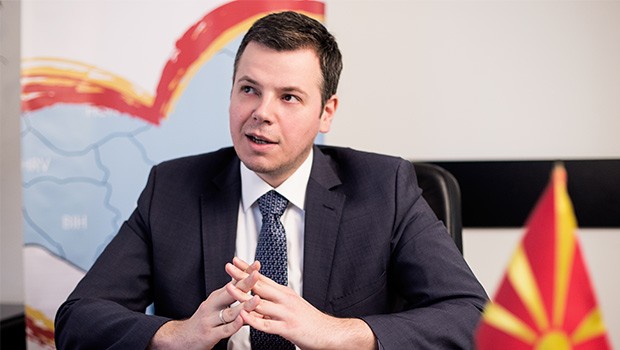 “In recent years, the software industry has emerged as one of the most dynamic sectors of the Macedonian economy.”

Do you want more information about business opportunities in Macedonia? Then read our interview with Mr. Kliment SEKEROVSKI, Deputy CEO of InvestMacedonia

Capital: Skopje
Population: 2.1 million
Borders: Macedonia is located in the central Balkans and shares common borders with the following countries: Albania to the West, Bulgaria to the East, Greece to the South and Serbia and Kosovo to the North.
Official language: Macedonian
GDP growth: 4.1% Q3 2014
Currency: (1€) MKD 61.5

How should European businessmen, and particularly potential investors, view the current social and political situation in Macedonia?

European businessmen and potential investors should view Macedonia as a country with a stable macroeconomic policy, which is due to the overall efforts of the Government for starting a business i.e. one-stop-shop or 4 hours company registration, regulatory guillotine and improving interoperability between government institutions.

Also, Macedonia has a competitive location due to the geographical position of the country as the top reformer in the world in terms of starting and running a business.

The government’s future stated objectives will be to support the growth of domestic consumption, industrial output and create a favorable environment for foreign and domestic investment. To achieve this, the government has already implemented and is still developing, a number of measures, including:

– Further public sector reform including the introduction of private sector investment in the public services and infrastructure sectors;
– Continuation of trade liberalization policies;
– Measures aimed at enabling easier access to financing;
– Implementation of tax incentives through the creation of tax-free zones and a general reduction of the overall tax burden.

What are the top 5 reasons to do business in Macedonia?

Which segments of the Macedonian market currently offer the most opportunities for European exporters?

Export is a major driver of steady economic growth and crucial for improving the international competitiveness of our country.

Invest Macedonia is also engaged in promoting domestic products and services on foreign markets and supporting Macedonian companies in the process of increasing their export abroad.

Target industries include the following:

The garment industry in Macedonia exports mainly to EU countries. 93% of the production is organized by the CM or CMT (Cut, Make & Trim) system for foreign markets. Full production and own brand production is partly exported and the rest is placed in the domestic market. The competitive export advantages of the Macedonian apparel industry are: Short period from orders to delivery Capability to produce small orders at the same prices as big orders Quality of performance Good transport and logistics services.

Agriculture is the third biggest sector by participation in the GDP, regarding the services and industry. If the processing industry were to be included, the percentage would increase up to 16%. Almost 435.500 people, out of a population of 2.1 million, make whole or part of their income from agriculture activities.

Trade exchange with agricultural-food products in 2013 amounted to more than €579.4 million. EU-28 is the most important trade partner of the Republic of Macedonia. Foreign capital of nearly €30 million has been invested in the agriculture sector in the past 5 years. In September 2014, the average gross monthly salary in this sector was €366.

The export of agricultural food products is 2013 has increased for 13.5% in comparison with 2012.

In recent years, the software industry has emerged as one of the most dynamic sectors of the Macedonian economy. The interest in software exports has been mainly spurred by four major factors:

1.There is a growing trend among Western European and American companies to outsource software related tasks and activities to lower-cost destinations thereby creating substantial market opportunities for Macedonian software and IT services companies,
2.On the supply side, Macedonia has significant comparative advantages, such as lower labor costs and highly skilled human capital,
3.Promoting the software industry is a well-proven measure to increase productivity, efficiency and innovation as well as to facilitate industrial transformation towards a knowledge based economy,
4.The fourth factor contributing to the importance of software exports for the development of the Macedonian economy is the country’s limited domestic market. Thus, export becomes an issue of paramount importance for the development and growth of the software industry.

Macedonia’s proximity to the rapidly growing automotive manufacturing base in Central and Eastern Europe and Turkey, which have become a regional superpower in the automotive industry, makes it an ideal location. The geographical proximity to these markets allows low distribution costs and “just-in-time” product delivery from Macedonia.

What advice do you have for European SMEs seeking to invest or do business in Macedonia? What would be the first thing you would recommend?

Invest Macedonia is the primary government institution which is in charge of attracting new foreign investments in the country and supporting the expansion of the foreign companies with already established operations. In addition to this, Invest Macedonia is also engaged in promoting the Macedonian companies on foreign markets and supporting them in the process of increasing their exports abroad.

The first thing an SME seeking to invest in Macedonia should contact the team of Invest Macedonia, because we help both foreign and Macedonian companies by creating and adding value for them with our broad knowledge and experience of the business environment and opportunities in Macedonia and other countries as well as by our close collaboration with various partner institutions and organizations.