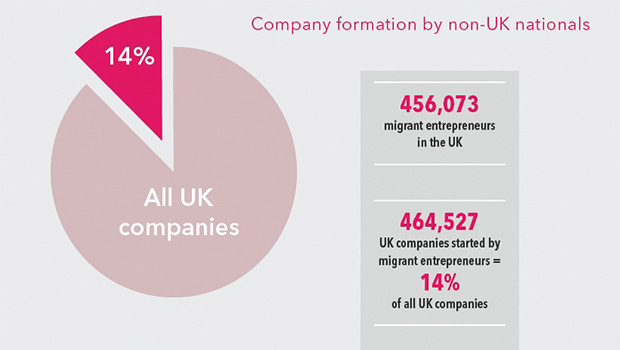 Immigration is one of Britain’s most fevered debates. Sadly, it is rarely informed by evidence. In the lead up to the recent General Election, a strong tone of hostility towards migrants was not just common, but central to much of the political debate.

Public opinion polls consistently show that immigrants are generally viewed in a negative light and that immigration is one of the most important electoral issues for the British public. To combat the hostility, and correct the myth that migrants are a drain on UK economy, the Centre for Entrepreneurs undertook a major piece of research to inform the immigration debate with data and evidence proving the economic contribution of migrants entrepreneurs.

We found that the evidence, as well as the context for the future debate about immigration, is clear. Britain relies on entrepreneurial migrants to launch businesses, create jobs and grow the economy. Nearly half a million people from 155 countries have settled in the UK and launched businesses. The Office for National Statistics (ONS) figures show 17.2% of non-UK nationals have started their own business, compared to just 10.4% of UK nationals.

To determine a sample of migrant entrepreneurs’ contribution to job-creation, we looked at SMEs (small and medium-sized enterprises) with £1 million to £200 million turnover. Among those SMEs that file employee numbers in the £1 million – £200 million bracket, migrant entrepreneur-founded companies employ 1,16 million people. As with the migrant proportion of UK companies overall, this represents 14% of all employment in this segment of the economy.

To complement the data findings around company formation and job creation, we also conducted nationally representative polling with YouGov to identify differences in public opinion towards migrant entrepreneurs and migrants more broadly.

What we can expect from migrant businesses

Given the numbers of migrants coming to the UK and launching businesses, it is easy to gloss over the challenges. At times, migrant entrepreneurs have the odds stacked against them, and are often launching a business in a new country that is not always welcoming: a great feat.

Firstly, many migrants feel they are locked out or under-utilised by the formal job market. Becoming self-employed in such circumstances is an important means of pursuing ambitions for upward social mobility. Businesses established by new migrants frequently serve as a refuge, offering shelter against an often hostile labour market. Family and fellow migrants usually provide the support that serves as the vital launchpad for entrepreneurial ambitions.

However, the paper also highlights evidence showing a genuine desire among new migrants to establish their own businesses. The researchers found that many new migrant businesses were keen to grow their businesses and were interested in utilising external support. But few businesses could be classified as ‘high-growth’ firms; and access to finance, cultural constraints, trading patterns, and access to information can all act as barriers to growth for migrant entrepreneurs.

New migrants often struggle to secure finance from banks and other ‘mainstream’ financial intermediaries, which leads to reliance on informal sources and the running of severely under-capitalised businesses. There is also a tendency for new migrants to trade primarily with their own communities, which means that their potential customer base can be quite narrow. There is, therefore, a lack of attention given to the need to diversify their businesses.

Language can be a barrier for some groups, as well as lack of familiarity with rules and regulations surrounding the business activities. Therefore, new migrants often struggle to secure information on the process of business start-up, and functions like marketing and business planning.

Despite the challenges, there are also benefits to being a migrant entrepreneur, and for those who work for migrant founders. Both owners and workers involved in new migrant businesses value the opportunity that the enterprise provides them to interact and integrate with the community around them. Additionally, many workers in new migrant businesses use their employment to acquire the experience and skills necessary to set up businesses for themselves. The goal for many was to strike out on their own once they had secured the necessary skills, experience and resources.

We learn and benefit from migrant entrepreneurs

Britain’s migrant entrepreneurs face feelings of displacement, change and uncertainty, yet display qualities of self-reliance and determination in building their own businesses. As Britain strives to improve its national economic performance in a highly competitive global market, our politicians, education system, businesses and the media cannot afford to ignore these lessons.

The author of this article, already part of Issue 5 of “The New European”, is Sarah Fink. She is currently Head of Research at Centre for Entrepreneurs. To find more about their activities click here.

SMEs
The category of micro, small and medium-sized enterprises (SMEs) is made up of enterprises which employ fewer than 250 persons and which have an annual turnover not exceeding 50 million euro, and/or an annual balance sheet total not exceeding 43 million euro.
New European (Parliamentary calendar)
The annual calendar of the European Parliament, where you can find all the voting sessions and various meetings the Members of the European Parliament must attend. Click here to have a look at the 2013 calendar.
New European (New Europeans)
People with a migrant background, who live and work in a European country and, in most cases, do not intend to go back to their country of origin. Their future is, rather, in Europe
Entrepreneur
A person who operates a business and takes on many risks to do so. Entrepreneurs are also innovators, coming up with new ideas and interesting solutions. New companies create more than 4 million new jobs in Europe every year.