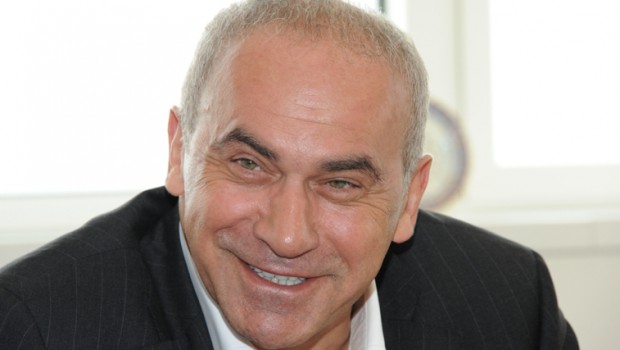 Can a mixed background be the right key for success in today’s globalized world? According to Sefik Birkiye, President and Founder of VIZZION Europe, one of the leading European architecture firms, the answer is yes.

Born in 1954 in Ankara, Turkey, he started travelling from an early age on, following his father, a diplomat. He then graduated from La Cambre School of Architecture (ENSAAV) in Brussels in 1978 and completed his Masters in Town Planning at the Catholic University of Louvain (UCL) in 1981.

In 1979, Mr Birkiye founded VIZZION Architects, previously known as Atelier d’Art Urbain, a firm of architects and urban planners fully committed to the improvement of urban environment. His early works were mainly localized in Brussels, where they contributed to a wave of urban development projects. Among them, “Canal Front”, which aimed at the revitalization of the former industrial district bordering the Brussels canal; “City 2”, the largest shopping mall in central Brussels.

Sefik Birkiye’s fame quickly made its way across borders, and he worked on projects in countries as diverse as France, Turkey, Egypt and the Virgin Islands. The founding, in 1997, of VIZZION Europe, the firm’s international branch, has consecrated this global reach. Since then, it has won many prestigious international prizes, such as the MIPIM Award in 1998 and again in 2000 for Le “Jardin des Fonderies”, an apartment building, and the “Green Island”, an office complex.

What is the recipe for such a successful professional life? To discover this, EPN (the European Professionals Network), one of UNITEE’s member associations had the pleasure to meet Mr. Birkiye. We publish here an abstract of the interview (you can find the integral version on EPN’s website), covering some of the topics that are dearest to UNITEE: Corporate Social Responsibility, Environment and Diversity.

It is an interesting glimpse into the opportunities and wealth New Europeans can create but also the competitive advantage they offer with their mixed background.

According to you, what does it mean to be an architect?

When I started, I thought I was going to build buildings. Instead, I realized that I was in a socio-economic environment, where architecture and urban planning were only there to respond to problems that had actually nothing to do with spatial planning and construction. The buildings were seen as the solution to the more general problems of life.

For this reason, I worked with the residents’ committees to determine their needs, to understand the urban struggles and conflicts of interest between the various social groups living together in a city. We thought about how to integrate the different actors of society in the city. The idea was not to harmonize them; rather, to make them live together with their differences.

What do you think about the increasing demand to respect environmental standards and ecological concerns? How is your sector evolving due to these constraints?

I do not agree at all with the spirit of the dominant discourse on ecology. I was fighting on these issues long before ecology and sustainable development were on the front line. In the 60s, for example, I joined the anti-industrial group, which refused industrialization and waste.

Ancient cities are the greenest in the world. In Paris, Rome and London, for centuries, all buildings have been reused, with new functions, since the structures were solid and stable. This continuity has been completely broken down by post-war industrialization. Then, today’s politicians have rediscovered ecology.

The best economy, the best ecology, the best sustainability is non-consumption! Do not use your car, isolate buildings well…. I am especially against fashion: how is it possible to make ecology out of vogue, which means that it is necessary to destroy something to have something else trendy? Often, people ask me what are the current “trends”. The trends are constantly changing, so when we talk about trends, we talk about consumption. “Fashion” architecture ends up by being out-dated. How many buildings from the 1960s or 1970s have I destroyed! While Haussmann’s buildings in Paris, for instance, will remain there for many centuries.

So, in the end, you claim you are not “fashionable!”

Absolutely! Human beings’ needs for housing do not change every 5 years. Clothing and food tastes might change, but everyone can recognize a good city. As Plato would say, we are blind if we can’t distinguish the beautiful from the ugly! Everyone knows how a nice town is made, but for some reasons it is not done.

According to you, what is the importance of volunteering in professional life?

Volunteering, in the sense of doing things without compensation, is actually an important part of social responsibility.

By helping each other, we “perpetuate humanity”, said Hannah Arendt. The originality of the human being is human artifice, i.e. civilisation, which is contrary to nature. We must not kill the weakest to survive, but we must help them to live with us. Otherwise, we would be animals. At all levels, we measure the quality of a man or a woman by the way he or she shares, he or she carries with him the other, with their strengths and weaknesses.

For my part, I have always worked with associations, since my student years. When I started to do my job in a much more lucrative way, and managed to create a successful company, I started to help students and non-profit organisations. For example, I am the organizer of the Prize for Green Architecture, which takes place every two years. And I am involved in other non-profit organisations on topics I care about, for example children, victims of domestic violence, asylum right… I always try to play a role, and not just by giving money. “Rather than giving a fish to the fisherman, I teach the fisherman how to fish!”, says the Chinese proverb.

To what extent did your multicultural background help you become a successful businessman?

It depends on your ambitions. If your ambitions are local, you have to deal with your difference. However, if your ambitions and concerns are global, everyone is a stranger. Nobody holds a global citizenship! Whether you are Italian, Iraqi, Turkish, or Martian, it does not matter that much.

Multiculturalism is not linked to your origin, or to the country you come from, even if this is one of the ways to access it. My father was a diplomat, so as a child I travelled a lot, I grew up in several countries, with several languages, always with different friends. My childhood experiences made me understand better, perhaps, the challenges of the world and to practice such an international job. If I had been educated in only one country, maybe I would have had fewer assets to solve a problem in a very international way. But a Belgian, a French, or an English person can be very sedentary as well as being very “international”. Everything depends on the experience one had when he or she was young.

It is important to experience multiculturalism when you are young. Otherwise, you remain locked up very quickly in a kind of comfort. But in the end you have less strength to face the differences, developments or cultural changes that are sometimes necessary to be a successful professional.

Committees (Proportional Representation)
A voting system. The number of seats that a political party receive is proportional to the number of votes that the party receives in a given geographic area (circumscription).
Committees (Plenary Session)
When the Members of the European Parliament (MEPs) vote on legislation and adopt positions on political issues. Plenary sessions take place 12 times per year in Strasbourg. Here you can learn more about the past and upcoming sessions.
Committees (Parliamentary Committees)
The European Parliament has 20 permanent Committees, where MEPs do most of the preparatory work for the voting sessions. The Committees cover a wide range of issues such as economic affairs, fisheries or gender equality.
New Europeans
People with a migrant background, who live and work in a European country and, in most cases, do not intend to go back to their country of origin. Their future is, rather, in Europe
Multiculturalism
Describes a community made of multiple cultures. It can refer to the cultural diversity in the demography of a certain place or organization, e.g. schools, businesses, neighbourhoods, cities, or nations, or to ideologies or policies that promote diversity.
UNITEE
UNITEE represents entrepreneurs and business professionals with a migrant background, most of them of Turkish descent, and whom we refer to as ‘New Europeans’. http://www.unitee.eu/