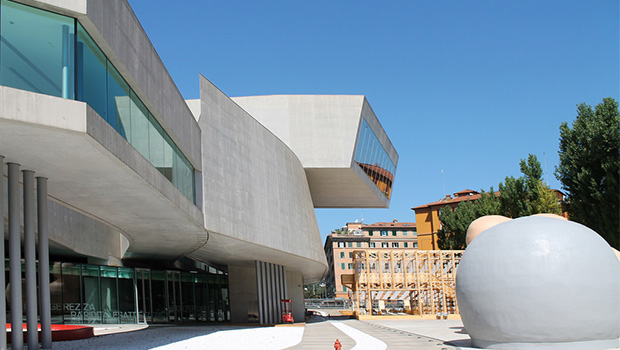 Born in one of Baghdad’s first Bauhaus-inspired buildings, when modernism connoted prestige and progressive thinking in the Middle East, one could easily tell that Dame Zaha Mohammad Hadid’s long-standing love story with architecture started the day she was born, well almost.

She recalls: “I must have been six or seven when my family and I went on holiday in Alahwar, a natural park in the south of Iraq; I was fascinated by nature, by tidal patterns on the sand, by wildlife, the fauna and flora, as well as by the Tigris-Euphrates marshlands inhabitants.” For Hadid, it was when it all fell into place “I realised that there was a relationship between mathematical logic, architectural thinking and abstraction”.

Zaha Hadid was influenced by a cosmopolitan and liberal upbringing that broadened her mind and widened her horizons. But when it comes to the essence of her cultural catalyst, she is rather straightforward: the designs of Russian supremacism and constructivists artists, alongside famous architects like Le Corbusier and Ludwig Mies van der Rohe.

Buildings should not merely serve a sheltering purpose, for Hadid, “[they] should feed the soul.” Her work was often described as Deconstructivist and Neomodernist, but it was Britain’s Design Museum that first put an emphasis on how her Arab identity and background have shaped her creative mind: “Hadid shatters both the classically formal rule bound modernism of van der Rohe and the old rules of space”. She reassembles them in what she calls “a new fluid kind of spatiality of multiple perspective points and fragmented geometry, designed to embody the chaotic fluidity of modern life”.

When it comes to her cultural roots, Hadid, wears them lightly. She would rather let her architectural spaces speak for themselves. Her obsession with shadow and ambiguity is deeply rooted in Islamic tradition and calligraphy, embodying the fluid and abstract processes used by Hadid. She is known for her dreamlike designs, sometimes difficult to implement yet praised for their rigour – a perfect blending of harmony, modernity and continuity.

As Rome was not built in a day, neither was her success and life lessons were sometimes bitter pills to swallow. Zaha Hadid has learnt a lot in her work as an architect: from how to thrive in a male-dominated profession, to how to get a client’s approval for a rather ambitious project. “My success is the fruit of diverse human experiences I had throughout my life and career; maybe it all boils down to my strong-willed personality” she says. “Yes, I have been successful, but it was no bed of roses, it is the result of constant dogfights and a lot of sleep-deprived nights”.

All these efforts paid off. In 2004, she was the first woman ever to receive the Pritkzer Prize (said to be the unofficial Nobel Prize for Architecture), and to top it off she was the youngest ever. And this is nothing but the beginning of the award rain that was awaiting her.

In 2008 she was ranked 69th on the Forbes list of “the World’s 100 most powerful women”, four years later Hadid was appointed Dame Commander of the Order of the British Empire. She won the Stirling Prize twice: in 2010 for one of her most celebrated works: the Maxxi, the National Museum of 21st Century Arts in Rome and in 2011 for the Evelyn Grace Academy. And the list goes on, and on.

Zaha Hadid is the most famous architect from the Middle East, and one of the most acclaimed architect in the world. Her bold and daring, innovative and aesthetic vision has set new standards in the field and will continue to do so with a number of her designs waiting for completion in the coming years.

Share the post "On Urban Design, Architecture and Pushing Boundaries. Meet Zaha Hadid, our New European of the Month"