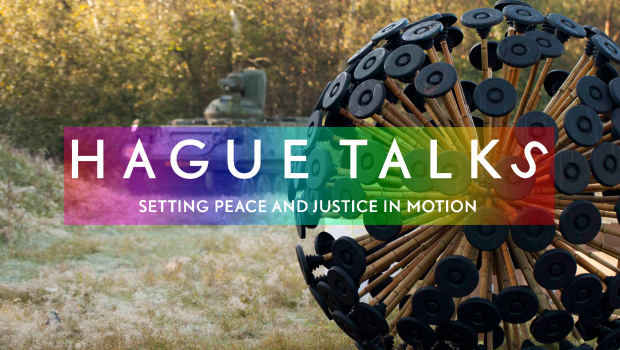 Living in Afghanistan as a kid, Massoud Hassani used to create windblown toys that rolled around the desert. As a teenager he sought refuge in the Netherlands and now he has created the Mine Kafon, a device which rolls around the desert moved by the wind and detonates the landmines it meets along the way. The next step for this entrepreneur is to develop drones to face the same challenge. Although drones do not have a very positive image due to their military use, in this case they will be used for a good cause.

There are military conflicts at various places around the world every year. Even if they end, landmines can be left as marks which are especially difficult to erase. Therefore, this kind of social entrepreneurship is an extremely important resource for the development of peace, while it is undeniable that peace is essential for the strengthening of trade and the development in any State.

Massoud’s invention for peace has been presented on the main stage of the global Hague Talks which is located in The Hague, often referred to as the world’s capital of peace and justice. Hague Talks are debates with the moto ‘setting peace and justice in motion’. They provide a platform for dialogue and seek to facilitate and enrich discussions on matters beyond their traditional areas of action. They provide a stage for innovative minds to share their experiences and opinions to foster peace and thus contribute to international trade and business development with creativity.

All ‘local’ Hague Talks are recorded on powerful social media to enable them to be a starting point of action in a wider global geographic area. Watch the inspiring talk ‘Art of destroying landmines’ given by Massoud here:

When choosing speakers, the Hague Talks do not look for speakers who could cover preselected topics. They do not adjust topics to preselected people either. The order in which topics and speakers are chosen is not relevant. What is relevant are the ideas, which are suggested by followers of the Hague Talks. The Hague Talks have had many migrant speakers but they rarely speak about being migrants. They speak about their expertise. Massoud spoke about his social business on 21st September in The Hague. This event provided a platform for young entrepreneurs who make money by providing peace and justice solutions.