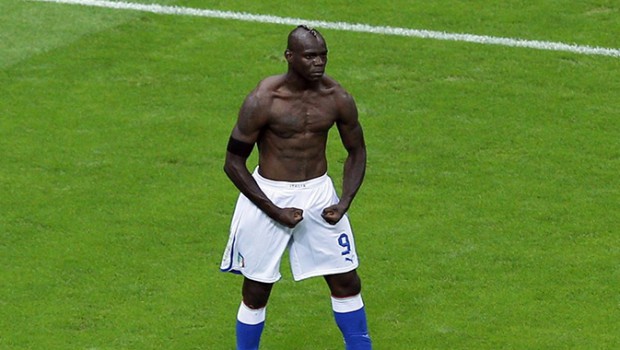 Super Mario: How a Black Football Player Can Be the Face of a Changing Europe

Think of it: who are the new faces of today’s Europe? Who is the personality best representing the Europe that is taking place in the shadows of Brussels’ buildings?

I have one name: Mario Balotelli, the Italian striker. Although it may sound heretical: what does the European project have to do with a footballer, whose enormous talent has always been accompanied by a mercurial character?

The fact is that football has never been just a game: it is, as the Italian film director and poet Pier Paolo Pasolini said, “the last sacred representation of our time”. In other words, football – even the terribly overspending football of our times – is a symbol. It actually is the only popular and universal symbol of today’s Europe: no matter how in depth a subject is treated in the political debate, it will never raise awareness, it will never establish itself, until it is represented in the collective ritual of football.

The rule applies even more to Balotelli’s story. His young life (notwithstanding his place in global superstardom, the Italian striker is only 23 years old) has been extremely colourful, between moments of pure class and acts of inexplicable madness – like when he almost set his Manchester house on fire after playing with fireworks in his bathroom. Notwithstanding all the different aspects of his personality, there is one element always manifesting itself: the colour of his skin.

Born in Palermo of Ghanaian immigrants, Thomas and Ruth Barwah, he was put into care just one year after his birth. He was then rescued and adopted by the Balotellis, a family from Brescia. “They say that abandonment is a wound that never heals”, the striker confessed in a 2008 interview. “I only say that an abandoned child never forgets”, he added.

Growing up, Mario became Super Mario: a champion, a star and the first black player to represent Italy at an international tournament. However, he had to wait to be part of the Azzurri, the Italian national team: the Barwahs opposed his legal adoption, and according to Italian law, children of immigrants born in Italy must wait until their 18th birthday to obtain their citizenship. But now he has become the star of the Italian team and of Serie A, the top Italian League, where he plays for AC Milan.

Balotelli’s professional life has never been easy, though. Since his first goals with Inter, the club that promoted him, he has been subject to racist rants by fans: monkey hoots, throws of bananas and the repeating chant “There are no black Italians” have followed him through his whole career. All these offences are, at least in part, due to his challenging personality.

Nevertheless, underlying reasons for that behaviour can be traced back to Italian history.

As opposed to other European countries, Italy has started only recently to be an immigration country: in 1990, foreign citizens living in Italy amounted to just 1% of total population. Today, this percentage has risen to 7%: mostly immigrants coming from the Middle East and Africa, taking advantage of Italy’s position in the middle of the Mediterranean. If those migrants were low-paid and performing low-skilled jobs at first, their children are much better off, becoming an important part of an increasingly multicultural Italian society. Balotelli is the symbol, and one of the best representations, of these new Italians.

Balotelli’s symbolism experienced its biggest triumph so far on a warm June night.

Italy was playing against Germany for the semi-finals of the 2012 European Championship. An important match not only as the last step to the final, but also for its meaning: historically, for Italians, Italy vs. Germany is “the King of Matches”. Every time the two teams have met before, it has always been a show. But this time, with Italy being considered the underdog compared to the strong Germans, there was scepticism about the Azzurri’s fate. Balotelli, though, changed the course of the match almost by himself: he scored the two goals that propelled Italy in the final against Spain, and the entire country exploded with celebrations.

In a country where football easily substitutes a lack of national sense, Mario’s goals were a powerful statement of belonging, as demonstrated by two pictures of the match: in the first one, immediately after the second goal, Balotelli stands shirtless, showing his muscles and his dark skin, while his blue-shirted mates race to celebrate with him. In the second, at the end of the match, a triumphant Balotelli hugs his tiny Italian mother Silvia, crying with pride. 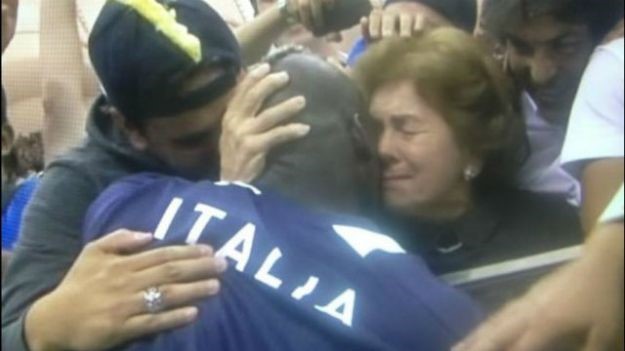 Two photos, which powerfully tell one real truth: Balotelli IS Italian. And what is more, an extremely successful one.  In his rise to the very top in the only remaining truly popular ritual, he has become a herald of the fact that, today, there actually ARE black Italians. Notwithstanding the racist jokes, these new Italians are changing Italy – and Europe. For the better.

Share the post "Super Mario: How a Black Football Player Can Be the Face of a Changing Europe"