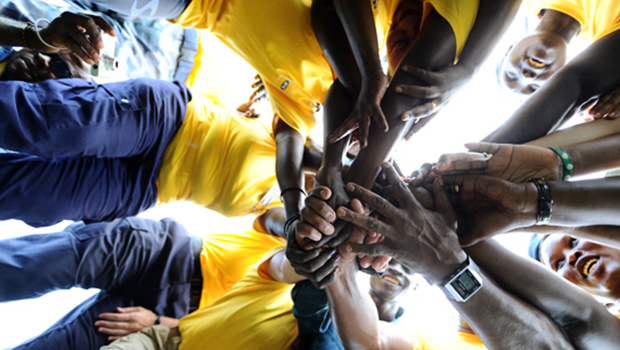 Nineteen years ago on the 16th of November, on UNESCO’s fiftieth birthday, its Member States adopted a Declaration of Principles on Tolerance. This Declaration pledges for a more accurate and thorough definition of tolerance that would not mislead anyone. Tolerance is neither indulgence nor indifference. Our world is rich of cultures, forms of expression and ways of being humans. Tolerance acknowledges the universal human rights and fundamental freedoms of others. It is of human nature to be diverse; only tolerance can ensure the survival of this colourful diversity.

In a world of uncertainty, in societies undergoing deep transformation, tolerance has never been so important for lasting peace and sustainable development.
Irina Bobov, Director-General of UNESCO (2013)

However, tolerance is under threat. Worldwide, there are individuals, communities, regions and, to a larger extent, countries led by an intolerant way of living or governing. Outright injustice and violence are not the only forms of intolerance. Discrimination and marginalisation seem to have risen over the last few decades.

It is up to every country’s powers that be to be willing to enforce or reinforce human rights laws or not, to ban and punish hate crimes and discrimination or not. States should not let people take justice into their own hands and resort to violence to settle their disputes. States should provide an equal access to human rights commissioners and ombudsmen.

Sadly enough, laws – however necessary –are not sufficient. Fear and ignorance are often cradles for deeply-rooted forms of intolerance. This paralysing fear of the ‘other’, of the unknown, of other cultures, religions and communities is often the mere result of an exaggerated sense of pride (personal, national or religious). Who has never heard of this timeless combat of the ‘good’ and the ‘bad’? Read: Us vs. Them. This unhealthy form of pride is taught, learnt and nurtured by countless generations.

This misconception of the other too often leads to amalgams, stereotypes and prejudices, harming peoples and communities in every way one can think of. In relation to this, greater emphasis needs to be put on better education. Deeply-rooted cultural behaviours should be tackled at every level of a human being’s life. Starting undoubtedly at a younger age (at school, children need to be taught tolerance, mutual respect and human rights), but education is a lifelong process that does not end nor begin solely at school. Endeavours to promote tolerance should take place everywhere: at school, at home, in the media (entertainment and information) and whatnot.

Intolerance is most harmful when used to fulfil the political and territorial ambitions of an individual or group of individuals. Hatemongers will use people’s lack of information and understanding to identify their threshold for tolerance to, then, bombard them with fallacious data and manipulate media to shape public opinion according to their hidden dreadful intentions. Education and an access to reliable information sources are key to overcome the long and treacherous path to tolerance. Countries should enhance and promote press freedom and pluralism so as to allow the public to differentiate what is right and what is wrong.

But, if one thinks it through, what is intolerance but the sheer sum of individuals’ intolerance? Bigotry, stereotyping, stigmatising, insults and racial so-called ‘jokes’ are examples of what some people are subjected to on a daily basis. Like money breeds contempt, intolerance breeds intolerance. It is up to each one of us to have a closer look at our respective behaviour, our seemingly harmless shortcuts (“oh X got mugged? Surely it’s a [insert nationality accordingly]) and phrases (“that is so [insert demeaning adjective here]). A link between our attitudes and this vicious cycle of mistrust and violence in our society has been proven time and time again. Think twice before you act and be aware of your own influence on others.

One last thing, just like change is meant to start at the grassroots level, solutions leading to the eradication of intolerance are not just global and waiting for political figures to act can take ages. We, the people, are more powerful than we think. Non-violent actions are the translation of people’s discontentment, but in a mutually respectful way, to discredit and put an end to scornful propagandas.

“Through tolerance, we learn to reconcile the universal rights that bind us together with diversity that has so much to offer” said the Director-General of the United Nations Educational, Scientific and Cultural Organisation, Irina Bobova. “We need others to fully be ourselves”.

Yes, you have guessed it:  we are the solution.

Tolerance is also at the root of the UNESCO-Madanjeet Singh Prize for the Promotion of Tolerance and Non-Violence. This year’s laureates are two human rights activists – Mr. Ibrahim Ag Idbaltanat (Mali) and Mr. Francisco Javier Estévez Valencia (Chile).