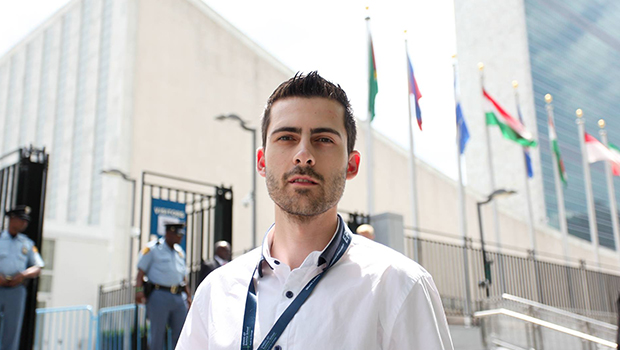 “Everyone should have his own space in a peaceful world, no matter their education, culture or religion. Respect is key to creating an inclusive and harmonious society.” These are the wise words of a young Spanish journalist and another proof that young people are ready to take action to make a positive social change.

UNITEE had the pleasure of interviewing Iván Fernández, 28, co-founder of “Peaceful World”, a group of drama students using short films to foster a peaceful coexistence among people from all countries and cultures.

Together with 75 young people, Iván was recently selected among 13 000 other applicants to a summerschool organised by the United Nations Alliance of Civilisations and EF Education First.

How did you become open to diversity and equity?

When I was a child, an immigrant family moved to my Spanish city. It was a Chinese family and they were lost in a new world. As they were living near my home, my parents started helping them to get used to their new life. I was really young. Therefore, becoming the new playmate of those Chinese kids was my task.

I had never seen anyone so different in my life: their eyes, their language, their games, their religion… They talked about somebody called Buddha, their own god. What? How was such a thing possible? Discovering that there were different religions to mine made me see them in a strange way. I guess I was expecting a strange behaviour as if they were a kind of aliens. But it did not happen. They cried, enjoyed, played, and breathed… the same way as me, even though they looked so different. They became my best friends.

Allowing me to play with those Chinese kids was the biggest present my parents could have given to me. Because they gave me values. It was like a seed which made me defend values like equality and respect. At school. In college. In my daily life. Everyone should have his own space in a peaceful world, no matter their education, culture or religion. Respect is key to creating an inclusive and harmonious society. That is the message that I try to spread with my videos or even working as an international journalist. And it all started with an immigrant family that inspired me.

You are a sports journalist. How did you get started with the project “Peaceful World”?

We started without even realizing what we were doing. When I came back home after studying abroad, I had the idea of making a short movie to show the spirit of my adventures. While I was looking for ideas, working on the script, analysing my experience, I realised that what I valued above everything was the opportunity I had had to live with people from different cultures. I had friends from different religions whom I got along very well with.

But every time I switched on the TV, I would see news about terrorist attacks or conflicts related to religion, racism… It was a context really different to what I had lived. So I decided to show that living in peace was possible and no matter your country of origin, culture or religion. As filming a short movie involves a great effort, I asked for help. My Drama classmates were glad to participate and it was the moment we started to work on these social topics.

Why did you choose videos over other communications tools?

I think audio-visual language is the most effective language. You can use images to impact the viewer and music to psychologically sharpen your message and provide meaning. I consider it as the most touching language.

What have you learned through this experience?

All of us could learn a lot about other cultures. We also discovered that a lot of people share the same values but they only need someone to encourage them to start taking part in social initiatives. And it was not about learning but about reinforcing our conviction that a peaceful world where people from all backgrounds have their own space is possible.

How do you think young people, often referred to the “lost generation” due to the high unemployment rates, can have an impact in promoting cultural understanding?

It is simple: just with their attitude. Sometimes, even the smallest gesture can have the biggest meaning. All of us may know examples of children or young people who were discriminated against at school, high school, college… just because they were immigrants. So I would say to those native youngsters to approach that immigrant classmate they are discriminating. Sooner than later, they will find out that we are not so different, that there is not any particular reason to discriminate people –immigrant or not– and that the immigrant classmate everyone was making fun of has a lot of good things to offer to us as our friend.

If we face the racism problem at school, we can proudly say that young people are having an impact in promoting cultural understanding. Sometimes we hate or are afraid of something just because of ignorance. In fact, racism is a matter of ignorance. Some people are racist just because they have never had the opportunity to meet a person from another country. So let us try to know more about people before taking assumptions or discriminating them.

What should be done to help them have a bigger impact?

More exchange programs are needed as a way to promote cultural understanding. Getting to know different people makes you understand them. That is the first step. It is the same as planting a seed. It is a way to involve them and make them feel interested. When you are interested in something, you try to find the way to have a bigger impact, even some guidance or help in terms of providing them with new tools and skills, and economical aid in some cases too, is always needed.

What would you share with other young people who are willing to engage in activities that promote positive social change?

I would encourage them to participate. Not only will they feel satisfied because they are doing something valuable to others but they will also meet people who share the same values, people who understand them and people with whom they can work. When you take the decision to engage in that kind of activities, a great personal enrichment comes after.

How was your experience in the UNAOC-EF summerschool? What did you learn from it? What was your best moment?

It was a great, productive experience. Having the opportunity to learn and live with 75 people from 75 different countries only happens once in a life. I acquired new tools to go on promoting cultural understanding. I feel even more encouraged now. I learnt that collaborative work is better, together we can make a bigger impact.

As an actor, I was also impressed by the session “Theater of the Oppressed” which made think of theater as a powerful tool to raise awareness and foster a social change. As a journalist, I discovered stories about alternative media which were set up to give voice to minorities usually forgotten by journalists.

But the most special experience were all the moments I spent chatting with other participants, sharing experiences, points of view, understanding their realities, learning from them, feeling blessed for being part of such a generation, feeling hope and realizing, again, that a peaceful world is possible.