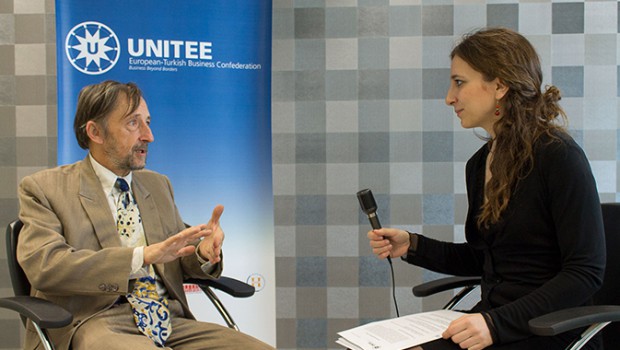 “Migration is about the Survival of Viable Economies in Europe and about Maintaining their Development.” Interview with Patrick A. Taran

As a leading specialist on labour migration, how do you perceive the connection between the economy and migration in Europe today?

Migration is about the survival of viable economies in Europe and about maintaining their development. Ten to twenty percent of the workforces of Western European countries are comprised of the foreign born, or the first generation descendants of the foreign born. This means that it is people coming from elsewhere who have been, and are, providing some of the critically needed skills and labour powers that simply are not here or are  disappearing, given aging and declining workforces in this region.

The biggest misconception about migration today is that migration is a problem rather than a solution. Migration is key to maintaining healthy economies and viable and dynamic workforces, and to providing the skills for an increasingly technologically inclined future in this region, as well as elsewhere in the world.

While working for the International Labor Office as a senior migration specialist, you were responsible for the programmatic activity to combat discrimination against migrant workers and to protect the rights and dignities of migrants.  What did the results show?

I was involved in developing situation testing in the labour market of a number of European countries to make sure that things are functioning in the way they are supposed to be – by finding out where they are not.

With these tests we found out that people of foreign origin who were equally qualified for jobs, often have to make five times as many tries to get one positive outcome in the job seeking process, in comparison to someone who has the typical native profile.  Here, I am talking about people who may have a last name or an appearance that says where they came from, or that their parents came from somewhere else. The difference is five more attempts for people coming from backgrounds where they simply had a marker that said they were of foreign origin – but no other difference relevant to employment.

That is not a way to welcome people into your labour market or to ensure that you are hiring the best and brightest. Normally, it is not a question of how somebody looks, it’s what they have got inside and what they can produce. That is why discrimination isn’t helpful, because it often arbitrarily ends up setting people aside, when they are the people that you really want for your company to work, if you want it to be productive and you want to make a profit.

Among the countries where we conducted the studies were The Netherlands, Belgium, Germany, Italy, Sweden, Spain and France; and similar tests have also been conducted in the UK, Ireland and Denmark. They have all almost universally come up with very similar figures showing this fact, despite some differences in composition of the workforces and in the business community and some differences in terms of laws and practices. There are serious problems across the board and this common challenge of discrimination, simply reinforces the importance and the effectiveness of a European Union wide approach.

What role do you think organisations such as UNITEE play in terms of promoting entrepreneurship, active citizenship and inclusion of new Europeans?

UNITEE plays an essential role and stands out as an organisation that is emblematic as being a member-based organisation of employers that is promoting entrepreneurship.  It is raising the standards and saying that there are both certain norms, practices and laws, which need to be taken into account in developing the relationship between the enterprise and its workforce, its skilled and less skilled employees.

UNITEE can also play a very important role in articulating the different inputs and sharing those in the European Parliament, with the European Commission and the specific directorates, particularly DG Employment.

I hope UNITEE will expand its role and will continue to do the kind of events it is doing, bringing together the qualified experts with EU constituents, European policy makers and parliamentarians. Meaning that UNITEE should say: look, we have to put the facts on the table, we have to look at what the different interests and perspectives are, and we have to find a way forward that we can go together. This is going to meet our needs and that is going to ensure that the people who Europe will need in the future are going to be there.

I want to emphasize that we have seen nothing yet in terms of challenges. A research institute called the McKinsey Global Institute forecasted , based on good evidence, that by the year 2020 the global shortage of high-skilled  people will be approaching  85 million people ; that is 40 million people short of what employers need in the high-skilled areas that require university level education; they also estimated that  there would be another 45 million people without the skills in vocational educational and scientific areas that are needed by employers in developing countries.

What is going to happen if you are already not producing enough people with the skills needed and if the migration policies in this region remain restrictive?

A whole number of countries are reaching zero population growth rates, meaning that in a few years they are also going to see increasing departures from the workforce, contrasted with fewer people entering.

These issues are critical and when other countries begin to demand those missing skills and Europe isn’t providing a welcoming atmosphere, what I fear is that if you don’t have a comparative advantage and you are not welcoming people, they will go elsewhere.  Those people are the people you need, in order to make sure that your economies remain viable.

Click on the following links to read the transcript:   2014-01-06_Taran_transcript.pdf

Share the post "“Migration is about the Survival of Viable Economies in Europe and about Maintaining their Development.” Interview with Patrick A. Taran"