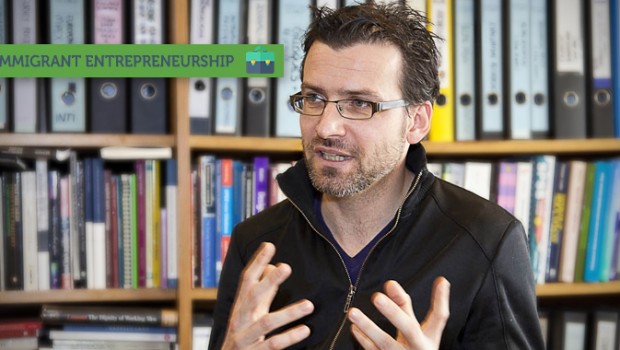 Dirk Jacobs is a Professor in Sociology at the Université Libre de Bruxelles whose main areas of expertise include migration studies, integration policies, and the sociology of education. He is part of the Group for Research on Ethnic Relations, Migration and Equality (GERME).

For our series on immigrant entrepreneurship, UNITEE asked him about the link between education and the labour market, self-employment among migrants, and voting patterns of people with a migrant background.

Do European educational systems foster an equal access to the labour market for migrant youth and natives alike?

In Europe, children with a migrant background tend to have delays in education and generally score lower on standardised tests. This can, for the most part, be explained by the socio-economic position of the pupils, but also by the effects of segregation.

If a lot of pupils that live in disfavoured neighbourhoods with poor housing and difficult situations at home find themselves in the same classes, it increases the challenges. In this sense, the fault does not lie with the migrants; the issue is that the schooling system is not sufficiently catering to the specific needs of this particular population.

Another problem is the transition from primary to secondary education. Some countries opt for early tracking, others choose late tracking. It is well shown that there is a risk of an increased reproduction of social inequality in countries with early tracking.

Children need to get the chance to discover what their interests are and where their talents lie. When this choice has to be made too early, then this decision may not be made for the right reasons.

What should be done to ensure that migrant youth will be better equipped for the labour market?

It is important that if there are delays caused by linguistic problems, for instance, due to another language being spoken at home, that help is being offered. We know that grade retention is not an efficient strategy: hearing the same thing by the same teacher in the same way does not guarantee that the pupil will improve. A much better strategy would be to identify the learning problems of pupils as early as possible and try to remediate them.

The goal for an entire educational system should be to guarantee that there is a good school for every child. Every school should have a good mix of social backgrounds so that all of them have the same kind of composition and standards.

However, as long as there are still schools with a disproportionately high number of pupils from a disfavoured background, you should make sure that these schools receive more resources.

Can we speak of equal opportunities in the labour market? Do migrants with the same level of education as natives have the same chances of employment?

A big study concluded that there are two segments in the Belgian labour market. One comprises good, well-protected jobs with decent salaries and good career prospects and the other part includes positions that are lower paid and often temporary.

If we look at the profiles of people that work in these two segments, you find a very high level of ethnic stratification. In low paid sectors there is a concentration of people of foreign origin, whereas in high paid sectors these people are rarely to be found.

This can, in part, be an effect of the malfunctioning of the educational system. However, studies have shown that, in one third of the cases, only persons with a non-migrant background are invited for job interviews.

There is abundant proof of discrimination in the hiring process and this is completely irrational from an economic point of view. You might miss the opportunity to recruit talent due to unsubstantiated reasons.

Generally speaking, the rate of self-employment is much higher among migrants compared to natives. Is it still a way to avoid the labour market where they might be discriminated?

Yes, self-employment is an alternative way to acquire an income without being dependent on a salary in the classical status of employee. If you cannot get a job because you are confronted with difficulties linked to discrimination or competition on the labour market, then one of the best alternative strategies is to decide your own fate.

In this sense, it can be a strength to be part of an ethnic community so that you may be able to identify an ethnic niche. You can think of Muslims who want to eat halal food. If existing supermarkets do not provide this particular food, then there is a gap in the market.

Many people with a migrant background have spotted these opportunities and have become successful in undertaking economic activities.

Can entrepreneurs constitute a role model for the younger generation within their communities?

Entrepreneurs can certainly be a role model and I think that, in many cases, they already are. In Europe, speaking Turkish, Arabic or Urdu is often seen as a disadvantage because emphasis is placed on national languages, but it is actually an enormous potential asset. It creates openings to international markets and it is something to be valorised.

There are very important import export businesses that might have grown out of an ethnic niche but are becoming important actors also in the broader economic field.

What role can ethnic associations play in promoting active citizenship in migrant communities?

Ethnic associations are sometimes viewed rather negatively for fear that they would feed communitarianism and cause communities to become islands separated from the rest of society.

Still, it is important to keep ties with people from other backgrounds. Being part of a network of people that are very similar to you can be a strength, but it could also become a weakness. If your ethnic community is the only social circle that you are part of, then this might inhibit creativity and limit your possibility to think outside the box.

What is the turnout among migrants at elections? Are they at all interested in voting?

Migrants tend to have lower turnout rates, especially in countries without obligatory voting. This is partly linked to their socio-economic position and their migrant background, but we do see fluctuations in this respect.

It is true that people with a migrant background often vote to the left because they tend to be part of the working class. But this is also a missed opportunity for right-wing parties, which have acted for years as if the migrant population is not really part of society.

However, many parties are putting more effort in establishing ties with migrant communities nowadays. This is only logical considering there is so much diversity within migrant groups. I think it is in everyone’s interest that we have a general reflection of political opinions.

Hopefully, in twenty years’ time, migrants will be viewed as part of the general population and being of Turkish descent will be considered just one aspect of a person’s identity that is much bigger than that.

Share the post "“Self-employment is a great strategy for migrants to decide their own fate”, Interview with Dirk Jacobs"

Ethnic niche
A market for people from a particular background whose needs are not adequately catered to.
Ethnic stratification
A system of structured inequality in which people receive different amounts of society’s resources based on someone’s ethnic group.
Tracking
Separating children into different classes according to their academic ability.
Entrepreneurship (Entrepreneur)
A person who operates a business and takes on many risks to do so. Entrepreneurs are also innovators, coming up with new ideas and interesting solutions. New companies create more than 4 million new jobs in Europe every year.
UNITEE
UNITEE represents entrepreneurs and business professionals with a migrant background, most of them of Turkish descent, and whom we refer to as ‘New Europeans’. http://www.unitee.eu/