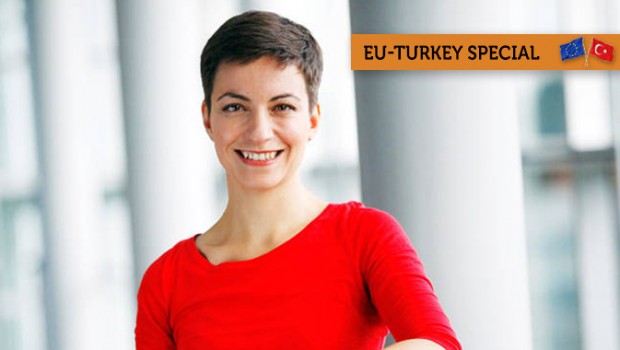 You are the Greens’ top candidate for the European elections and thus candidate for the presidency of the European Commission. The participation in the European elections keeps on declining, having only been 43% in 2009. Eurosceptic parties are attracting more and more voters across Europe. How can we make the communication process of the importance of the EU more effective in order to mobilise voters? How can we counter the growing influence of Eurosceptics?

I think it is very important that the parties, hence we as well, point out in the election campaign what is at stake in the European elections. And a lot is at stake: it is a choice of direction for the European Union. Do we want a Europe of banks or of citizens? Do we want a closed or an open Europe? Do we want a democratic Europe or a Europe where the heads of state and of government make decisions behind closed doors? And it is also about the question of how many right extremists we are willing to let in to this Parliament. That is what I consider important: pointing out what is at stake.

However, I also think it is important to make clear where the differences are between the parties. We should not simply say, “Europe is great – vote for us”, that is not a programme. Rather, we want to change Europe. There is a lot going wrong on the European level and we need to point that out, while also saying where our Green ideas and answers are and how they differ from the other parties. Because it is of course very important for a democracy that you can choose among different parties according to your political opinion and it is important to also point out the differences.

The European elections allow the citizens to have a say on the future direction of the EU. In your opinion, what is the right way for the EU, more or less Europe, and why?

For me it is important in Europe that we look carefully where a decision has to be made. It is not generally about more or less but it is a matter of making the decision as closely as possible to the people – but precisely on the level where it makes sense. For instance, it does not make sense to decide on the European level where a bicycle path is to be laid out. However, it does not make sense, either, to decide in the village how to shape climate change in Europe as it is a cross-border issue. Hence, we always have to look carefully where it makes sense to decide.

This may also change in time because I believe, for example, that we have to develop a more social Europe, a Europe which also takes social matters into account as we have a lot of people who cross borders – this is also a consequence of Europe. Hence, the decision where competences are to be established can change.  But it always needs to be decided on a case-by-case basis. I think it would be weird to generally say all or nothing.

What issues do you think will be central for the European population in the upcoming elections? How do you and your political group, the Group of the Greens/European Free Alliance, address them?

In the end I want to listen to what the people in Europe say and what moves them. So, I do not want to generally say, “the citizen says this, or the citizen says that” – it is very important to me that we lend an ear to the citizens and do not simply go around saying “this is how it is”. What I often hear is that many people would like the European Union to do more for their human rights but also more for their social rights. For instance, the question, “why does the EU not do more for the minimum wage?” often arises. Then we have to say, “that is a national competence”. I do hear that many people feel that the European Union has to take more care of their social rights and provide more support to them personally, and I think this is an important hint.

You are a member of the Joint Parliamentary Committee EU-Turkey. We have seen some worrying developments in Turkey, in particular regarding the separation of powers and the freedom of speech. In your opinion, what will this mean for EU-Turkey relations? How do you see the future of Turkey’s accession negotiations?

When we had the debate on Turkey’s progress report on March 11th 2014, one could see that people who actually favour the accession say that we need to suspend the negotiations, which I do not find very effective. In the end, accession negotiations are hardly taking place; we do not have real, honest accession negotiations. This is why it is so difficult to exert pressure this way.

And I think it is a pity that the EU has deprived itself of the possibility to influence the reform process in Turkey. Because it is quite clear that Turkey, if it wants to join, must meet the Copenhagen criteria, which include the independence of the judiciary, human rights, the rule of law…

But if we do not really support the accession process, then there is little leverage. And this comes back to haunt us here, as we have seen with Gezi, the corruption scandals, the independence of the judiciary.

And in your opinion, what will be the next step after the vote in the European Parliament? What further development will we see?

I think it is important that the Commission, as an institution which has always been in favour of proper accession negotiations, has a strong position and that we as the Parliament position us clearly. That also applies to our dialogue with Turkish members of parliament as we are a joint parliamentary committee with Turkish and European members. We have to say clearly that it is important to us that the independence of the judiciary is respected, that human rights are respected, that the incidents in Gezi Park are investigated, and that these are the key issues for us and not necessarily the economy.

I think civil society is always a very important actor. Clearly, there are differences: an environmental association is not the same as a business association. I think a business association has quite different resources and possibilities and easier access to decision-makers than a local citizens’ initiative protesting against a coal-fired power station. It is important to check whom one is dealing with.

However, in any event, it is very important that people have the opportunity to influence decisions, to participate. That is certainly also true for organised civil society. And in particular with regard to the issue of migration – where state actors, governments, tend to paint a negative picture – it is important to try, on another level, to reverse this picture as it is unfortunately a great pity that state actors often fail to such an extent.

Greens/EFA
Group of the Greens/European Free Alliance
New European (Parliamentary calendar)
The annual calendar of the European Parliament, where you can find all the voting sessions and various meetings the Members of the European Parliament must attend. Click here to have a look at the 2013 calendar.
New European (New Europeans)
People with a migrant background, who live and work in a European country and, in most cases, do not intend to go back to their country of origin. Their future is, rather, in Europe
MEP
Member of the European Parliament. The MEPs are your representatives at the EU level. They adopt EU legislations and the budget. You elect them for a period of 5 years. The next election is in May 2014.
Eurosceptics
Those who criticize the European Union (EU) as being too bureaucratic and/or undemocratic, or even not viable. Some of them actually strongly oppose the deepening and widening of the EU.
UNITEE
UNITEE represents entrepreneurs and business professionals with a migrant background, most of them of Turkish descent, and whom we refer to as ‘New Europeans’. http://www.unitee.eu/