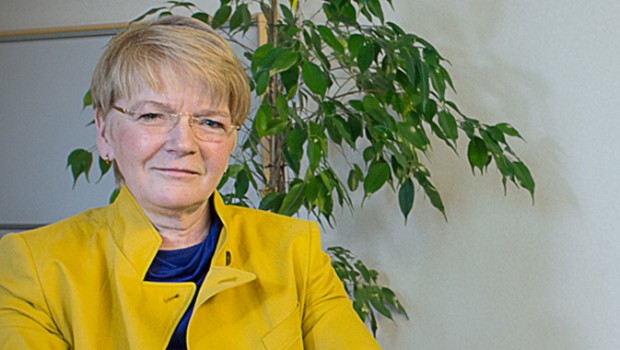 Born and raised in East Germany, Gabriele Zimmer became a member of the Thuringian Parliament in October 1990, after the fall of the Berlin Wall. Since 2004, she has been a Member of the European Parliament. She is the Chair of the Confederal Group of the European United Left – Nordic Green Left and focuses her parliamentary work on gender equality, democracy, social and employment policy.

Can you tell me why you decided to go into politics?

I became politically active when the Berlin Wall came down.

Since then, I have been fighting for the interest of women. As I am from East Germany, I have experienced that many well-trained and experienced women lost their jobs and their skills were lost to the labour market. That was when I started to become politically active to make sure the experiences of these women did not just disappear.

And why European politics? I studied languages ​​and I have always been interested in the European culture.

It was also related to the unification of the two German states. For me, it was easier to identify myself with Europe, rather than with the new Federal German Republic.

You are deputy member of the Committee on Employment and Social Affairs. How can SMEs best be involved in the creation of a fairer European social market economy?

The EU has to be a social union. The people who are currently socially excluded, who have mini-jobs or jobs they cannot live off need well-paid jobs so they can contribute to the economy, and boost domestic demand. Only on this stable basis, do SMEs have a chance to exist.

On the EU level, there is still a lot to be done to support SMEs. The EU should not only create structures that support large and multinational companies. Therefore, we need a different fiscal union, a different economic union, and we need concrete support for SMEs.

There is a lot we can do: reforming the form of lending, the European Central Bank would have to be restructured and get another mandate so that the loans it provides to the banks can be passed on directly to the SMEs.

The states that are in difficult situations need investments in the future. Also, with regard to SMEs, long-term investment programmes are needed.

As leftists, we stand for concrete programmes that would nationalise certain sectors. If regions are able to give out public contracts, SMEs would benefit from it, too.

How can we prevent the rise of xenophobia and Euro scepticism? What do you personally think is the way forward for the EU: more or less Europe?

Many people ask this question, “more or less Europe?”. But the question should not be “more or less Europe”, but “what kind of Europe do we want?” More Europe, in the sense of a neo-liberal EU, is benefiting relatively few. A Europe that is helping only the big banks does not help the people who actually have to fight for their existence. We need to replace the fundamental principles, the basis, that Europe stands on. The system now is only worsening the inequalities we currently have. Look at SMEs in Member States like Greece or Spain, or in Eastern Europe.

We need fairer policies, a common vision for developing a tax policy, we need to see more solidarity! Only if people feel that they are being treated fairly within the EU, they will be pro-European.

Right wing parties are only so successful because many people perceive the EU as a threat.  They know the EU it is not a social union, they fear for their jobs, they have seen their minimum wages decrease, their working contract discharged. Of course, this stirs up frustration.

It is problematic how people that live in poverty, or are in precarious employment, are turned against each other.

We, as leftists, are trying to clarify that it is not Greek people who are lazy and who are to blame for the crisis. The austerity measures, especially for public spending, essentially contribute to worsening the situation of the people. We have a very high unemployment rate, especially in youth unemployment, no one can live with.

If people have no perspective, no hope, if they are being told “arrange yourself with the situation, it will not change anytime soon”, their trust is destroyed. We need to try  re-establish the trust.

In your opinion, what are the topics that will be in the next EU elections are of greatest interest for the citizens? What are the reactions of the European United Left – Nordic Green Left to this?

All topics that concern the concrete life of people. Will the various countries finally experience economic growth again? Will there be a consolidation of the budgets? Will there be concrete measures against youth unemployment? How safe are the pensions?

There is also the question of a better education. Why does EU not start and create a unified European educational system? But then, if it is not even doable on a national level in Germany, how can we expect this at EU level?

We must offer competent answers and come up with suggestions and alternatives so that people do not believe the dangerous discourse of the Euro-sceptics. The times when you could run everything at the national level are over.

Since March 2012, you have been the Chair of the Left Group in the European Parliament. Could you explain which specific tasks this position includes?

The Left Group is organized a bit differently, compared to the other groups. We see ourselves as a confederation. All parties that are represented here want to ensure their independence, and my mission is to unite them, highlight the similarities and, thus, allow for visibility of the group.

Together, we stand for a social Europe, against austerity and for more democracy.  We are against an increasingly militarised EU.

I try to keep the group together in their diversity, and that is not always easy!

The Left group comprises a range of parties that would normally not cooperate with each other. In some countries, deputies are even opponents on the national level.

What will be your personal priorities during the election campaign? What changes would you like to see on a European level?

My personal focus is the fight against poverty in the European Union. I just cannot accept that over 20% of people in the EU are considered as poor!

Social exclusion is often related to this, a cut of their democratic rights.

I also want to address energy poverty during the election campaign. The EU supports energy-efficient refurbishment of houses. That is a good thing; however, it often forces people to move out, because they cannot afford the increased rent of the renovated apartments afterwards.

The number of power outages has also increased. In cold winter, here in Europe, people freeze to death in their flats!  That is inacceptable. In the EU, anyone should have the right to live in dignity. I do not want an EU that sees itself as a banking union, but an EU where people are the priority!

SMEs
The category of micro, small and medium-sized enterprises (SMEs) is made up of enterprises which employ fewer than 250 persons and which have an annual turnover not exceeding 50 million euro, and/or an annual balance sheet total not exceeding 43 million euro.
Fiscal
A term referring to the use of government’s spending and taxation to influence the economy.
Austerity
Governments spend less in order to reduce budget deficits.