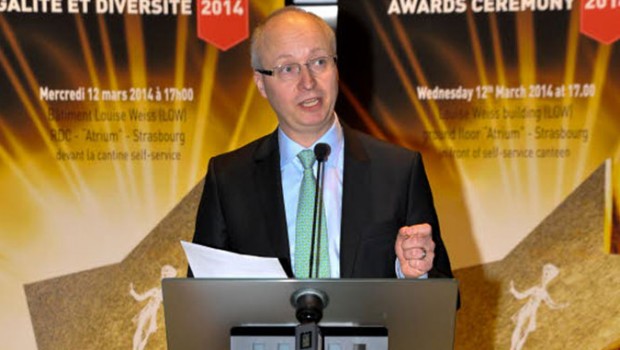 Mikael Gustafsson was the Vice-Chair of the GUE/NGL group in the previous European Parliament and Chair of the Committee on Women’s Rights and Gender Equality.

As a member of the Swedish Left Party, Vänsterpartiet, he would like to see a more comprehensive welfare system in member states: “The welfare system is a basic ground for gender equality and we should have a better look at how budget cuts affect women. A well-functioning welfare system that provides child- and elderly care is the key to women’s independence and participation in the labour market.”

In many countries, EU citizens have decidedly voted for clear right-wing and left-wing parties. Can you explain this move away from mainstream parties?

I think that it is very clear that the explanation lies in the crisis, its effect on people and the European Union’s so-called solutions to deal with this crisis.

There are many ways in which you can try to solve the crisis, but the EU’s approach of forcing measures on member states has created a social catastrophe.

Of course, this creates frustration with people. And who is to blame? You have these mainstream parties that have been part of the system and have created the present situation. Both social democrats and conservatives have been voting for a financial treaty, the Six Pack, the Two Pack; they were all part of this policy.

In this sense I understand why voters want to look at other parties. The left has always criticised that this was the wrong measure and would not be the way to improve the economy. We should have had more of a Keynesian approach stimulating fiscal policy in different countries instead of a Friedman model.

It is also unfortunate to see that as a result of this crisis there is an increase in racist and right-wing populist parties, because they get nutrition from social misery, poverty and high unemployment.

All these movements are increasing because people get frustrated. So, I think that is the reason why you have a divided situation in Europe.

Which direction would you like the EU to take in the next years?

If you want to end racism, increase employment rates, have more sustainable development and increase green investment, you have to change policy direction.

Cutting welfare spending as hard as member states have done now only leads to more people having less money in their pockets, which means that they will not be able to consume anything. This has affected the private sector a lot.

Governments should be allowed to invest more in things that will have to happen anyway. Using this crisis situation to invest in sustainable transport and energy systems could be a means to reignite the economy.

There is a big difference between a private person and a state taking a loan. Investment is not like consuming. When you consume something, you have to pay directly because it is really bad to borrow money.

However, if you invest in a rail road with a lifespan of forty years, it means that you consume it over these four decades and in this case it is good to have a loan. This way you distribute the economic burden over different generations.

Every private company is doing the same, so the state should also do this.

In your opinion, what is the role of women in the European economy? Do they still face more barriers in terms of finding employment or starting a business?

The problem is that women do not have the same access to the labour market as men. They do unpaid work at home and we need to redistribute this system so that they will also be able to work and get paid. Good child care and elderly care systems would make this possible.

In the 2020 strategy, it says that we should have an employment rate of 75 per cent but it does not differentiate between men and women. At the moment the employment rate of men is 74 per cent, while the one for women is 62 per cent.

This means that we should come up with something that will allow more women access to the labour market.

You have been the Chair of the Committee on Women’s Rights and Gender Equality. On what issues has the committee focused in this period and what progress has been made?

The thing that we have recently been working on, violence against women, is extremely important and it is currently our top priority issue. This is a huge problem in the whole of Europe and the committee has asked the Commission to put forward a legislative proposal that covers a minimum standard for all 28 member states.

According to our committee, the Commission has a strange view when it comes to violence against women. It is like a puzzle: you have different kinds of pieces, such as sexual harassment, rape, female genital mutilation, but these pieces are all linked to each other.

We also work on the gender pay gap and the representation of women and try to increase the number of women taking part in policy making areas.

What topics should this committee work on in the future?

There are many more important issues that I think the committee should work on, for example the connection to the labour market. All political groups agree that the crisis has had more damaging effects on women than men due to the cuts in welfare spending.

The welfare system is a basic ground for gender equality and member states should therefore have a better look at how their budget cuts affect women. They will have to build up a welfare system, which will increase the participation of women in the labour market.

People sometimes say that the TTIP should increase growth by 0.5 per cent, but if women worked at the same rate as men it would increase growth by 12 per cent. We talk about this trade agreement like Jesus is coming down to earth, but we could achieve growth in a much better way by giving more women access to the labour market.

What is it like to be the chair of a committee? Could you elaborate on what is required to take on such a role?

In any case, you need to be diplomatic. You also have to be open-minded and very respectful to every argument and proposal no matter where it comes from.

Both my predecessor and I have been working hard to find consensus in as many areas as possible. This means that I will have to compromise and be pragmatic. I cannot think that I can get through everything that I want; that is impossible.

The other members of the committee do not have to agree with me, but I need to create an atmosphere that they trust me. They should know that when I speak as the chair of the committee, I speak on behalf of them and not as a left party politician.

It is extremely important that the other members trust you.

Who do you think should become the next Commission president? Do you think it should be Juncker, Schulz or a candidate from the outside?

I do not think about this question very often, because I believe that the Commission has too much power anyway.

But I think it is very much up to the European Council to decide which candidate they want to put forward.

Friedman
Milton Friedman was an American economist and statistician best known for his strong belief in free-market capitalism. He strongly opposed the views of Keynesian economists, encouraging governments to minimise their involvement in the economy by reducing taxes and ceasing inflationary policies.
Keynesian approach (Keynesian economics)
Keynesian economics was developed by the British economist John Maynard Keynes during the 1930s in an attempt to understand the Great Depression. Keynes advocated increased government expenditures and lower taxes to stimulate demand and pull the global economy out of the Depression. Subsequently, the term “Keynesian economics” was used to refer to the concept that optimal economic performance could be achieved – and economic slumps prevented – by influencing aggregate demand through activist stabilisation and economic intervention policies by the government.
Two Pack
The Two Pack comprises two Regulations designed to further enhance economic integration and convergence amongst euro area Member States. The Regulations build on and complement the Six-Pack reforms to the SGP, the European framework for fiscal surveillance, and the European Semester for economic policy coordination.
Six Pack
The Six Pack describes a set of European legislative measures to reform the Stability and Growth Pact and introduces greater macroeconomic surveillance. These measures were bundled into a "six pack" of regulations. The six regulations aim at strengthening the procedures to reduce public deficits and address macroeconomic imbalances.
TTIP
The Transatlantic Trade and Investment Partnership (TTIP) is a proposed free trade agreement between the European Union and the United States.
GUE/NGL
Confederal Group of the European United Left - Nordic Green Left
Fiscal
A term referring to the use of government’s spending and taxation to influence the economy.