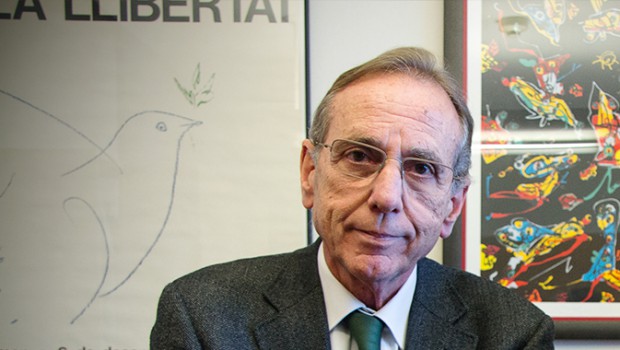 Raimon Obiols is a Spanish MEP for the Group of the Progressive Alliance of Socialists and Democrats in the European Parliament, and member of numerous committees, including the Committee of Foreign Affairs and the Subcommittee on Human Rights.

Mr Obiols started his political career fighting against Franco’s dictatorship in Spain. After fifty years of political activity, he will not seek re-election at the European Parliament.

“It has been a long experience, naturally, with many positive and negative aspects.  But in the end, the balance is clearly positive. Political activity is an essential dimension of people and, if you have the opportunity to develop it, you should try to give the best of yourself, applying a series of values, principles and duties. I have done whatever I could do in this sense.”

Mr Obiols shared with UNITEE his opinion on the future of Europe and Turkey.

Which positive or negative aspects of the political activity would you highlight?

The power of politics has diminished overtime compared to the power of capital. Even governments and Presidents of big countries, such as the President of the United States, have a more limited capacity compared to the past. This is due to the international market pressures. Most States are indebted: from fiscal states, they transformed into states of debt.

People have perceived that the power of the democratic politics has diminished, especially since 2008’s crisis, and that politicians are unable to find appropriate solutions. For example, the increase of inequalities between a minority which is becoming scandalously richer and a large majority whose chances to get a job is becoming drastically lower, just as their incomes, in relative terms.

The current situation looks more like the situation of the XIX century than like the situation after the 2nd World War in Europe, where some valuable elements were build such as the welfare state, the rights for citizens’ protection, etc. This is one aspect.

The other aspect is that this minority has an interest in discrediting politics and uses powerful tools, especially some big mass media, in doing so.

Then, as a third factor, there is the tragedy of our days: the corruption in politics.

We therefore have to think in strategic terms, with tenacity and patience, on how we can build a powerful and strong democracy able to face the deregulated market, impose democratic rules, avoid corruption and speculation in the economy and try to rebuild a social model. But it cannot be done separately in some States; the fundamental tool is the European Union: its institutions, the Parliament representing the people of the EU and a Commission really becoming the government of Europe.

Is the economic crisis basically a political crisis?

It is a crisis that encompasses multiple crisis: a crisis of the financial capitalism starting in the United States but that expanded to Europe and other parts of the World. As this crisis did not have appropriate political responses, it gave birth to a political crisis, a crisis of confidence which also led to a negative outlook on the future.  The perception today is that this crisis will not have an end or that, in case we manage to address it, it will lead to a low rate of growth, insufficient to absorb the high unemployment rate or to reduce precarious jobs among young people.

Do you think that left wing parties did the right job in the last years?

The left wing parties lack unity. The divisions within the left wing during the 20th century were very negative and in the 21st century this lesson of the past should be learned. Everybody is in favour of a fair fiscality, public schools, public health, a good pension system, an active policy against the unemployment. The problem is that left wing parties do not find the appropriate answers.

The myth saying that we need to grow to reach these goals is not sustainable in time. Because economies have limited dimensions and cannot continue growing in an indefinite way. This implies a reflection on how to create employment with very low GDP growth rates. There is a need for greater reforms in the European Union, to make a society with less inequalities, more employment for young people and a society less based on consumption. More sustainable as well. The relation with the environment will continue to be strategic for the creation of quality employment.

In a context of rising euro scepticism and populism, the 2014 EU elections will give citizens a chance to decide on Europe’s future, whether they want more or less Europe. How can we reverse the abstention rate?

There will be two important changes that might increase the participation: on the one hand, the perception that the answer to the crisis has to be European and that the extreme right wing in Europe is gaining strength. In France, Le Pen’s Front National is above 20% in the surveys. In the Netherlands, the extreme right is powerful as well. In other countries, there are different formulations of this same characteristic. I really feel there is an alarm. In times of crisis and social suffering, simple and demagogic messages are in a more advantageous position than other less rhetoric and grandiloquent proposals. These groups are qualified as being populist saying that solutions come by pressing a button.

On the other hand, there might be an increase in the participation due to the personalisation of the upcoming elections. The European political groups are presenting different candidates for the presidency of the “European Government”. The Socialist party already did it with Martin Schulz, the current President of the European Parliament.  It is already a step towards a more personalised campaign that is more appealing. I do not know if these elections are going to result in more or less participation. But we will have an electoral campaign that speaks more about European topics and less about national topics.

The financial crisis is most likely to play a big role in the elections. What other issues do you think will be central for European citizens?

Immigration is a very important topic in many countries and there should be more debate and reflect on this. Europe needs immigration: economically and socially. But this immigration needs to be welcomed in an effective way, without creating ghettos, without insoluble problems…

Kofi Annan came at the European Parliament and said: “Europe is confronted with two different scenarios: an old Europe in decline, nostalgic of what it was and what it will never be again, or a young Europe, more dynamic and innovative. The key between one or the other is a well-managed immigration.

How do you envision the relations between Turkey-EU in the future?

The development of the bilateral relation between the European Union and Turkey has been positive both for Turkey and Europe.

On the other hand, negotiations are taking too much time. It has been more than fifteen years that there is a commitment of the European Union. This is especially due to the attitude of some governments and public opinions in Europe.

But eventually, I personally think that the positive aspects have more weight than the negative ones: Turkey has benefited a lot from its relationship with Europe, not only on the development and modernisation of its economy but also through reforms within societies and institutions. On the whole, the output is positive but a point of exasperation remains because of this feeling of seeing that it is taking so long.

Then there is, together with the process of negotiation for the accession of Turkey to the European Union, the need to strengthen and reinforce the bilateral relations. There is a special need for the EU and Turkey to carry out a joint analysis and action in the Middle East.

Which is your message to encourage European citizens to vote?

The reflection has to be the following: the answers have to be European and in the future it will have to be even more so.  Also, the low turnout of the elections can pave the way to the extreme right wing.

History does not repeat itself, said Marx. If it does, the first time it is as tragedy and the second time as farce. But either way, the fact that the extreme right wing wins power is deeply alarming and is already a good reason to vote.

Share the post "“For more equality, greater reforms in the European Union are necessary.”Interview with Raimon Obiols MEP"