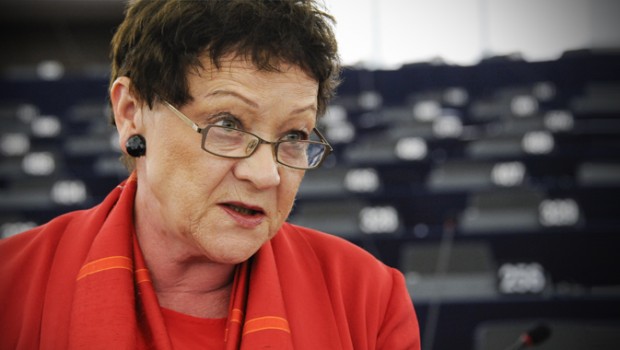 Published on May 13th, 2014 | by Christina WEGNER | Credit: European Parliament

Sarah Ludford has been a Member of the European Parliament for the Group of the Alliance of Liberals and Democrats for Europe (ALDE) since 1999. She is the Liberal Democrat spokeswoman on Civil Liberties, Justice and Home Affairs Committee and Vice-Chair of the ALDE Group in the European Parliament. She shares her views on Euroscepticism, the EU’s challenges in light of the upcoming elections and EU-Turkey relations.

Eurosceptic parties are attracting more and more voters across Europe. What could be the consequences of a large Eurosceptic faction in the European Parliament?

I think there is a diversity among those parties. There are the populists attracting those people who are disaffected in a rather unfocused way and I would say that is particularly true for UKIP in the UK. They are a party of protest. UKIP attracts people who feel frustrated or disappointed with how things are and are searching for something to blame.

Then there is Golden Dawn in Greece, a pure Nazi party and nothing else. In between you have the National Front in France, which is also racist and xenophobic, and Geert Wilders’ PVV in the Netherlands, which is a peculiar mixture, very Islamophobic but pretending to be socially liberal, for instance, on gay rights.

It is going to be a problem. I think that according to the forecast we could get 30% of Eurosceptic members in the European Parliament – at the moment we have about 10%.

This will have all kinds of repercussions, not least because they do not do any work. They sit there and posture and have flags on their desks, but they do not get involved with any of the hard slog – in the committee, scrutinising legislation, voting, and so on – so more work will fall on those who are active.

Which measures would you suggest to counter the growing influence of Eurosceptics?

I think the way to counter it is just to try and explain to people how important the EU is for jobs, in particular.

Three to four million jobs in the UK are dependent on our membership of the EU and our access to the EU Single Market. 540,000 jobs in London could be at risk and smaller businesses in particular could close because their business inside Europe is so important.

We have to be in the EU for jobs. Not like Norway, for instance, which is allowed to access the European Single Market, but it has no say in the rules and regulations. It would be an even bigger loss of sovereignty, so it would be absurd.

EU membership is also beneficial when it comes to catching criminals, for instance under the European Arrest Warrant, because organised crime is a terrifying threat to Europe.

Another major area is the environment, pollution and climate change. We absolutely need European cooperation on these issues. We have just got to try and engage with people on the hard facts instead of this kind of diffused fear. We have got to point out to them the practical advantages.

The other thing I would say is that we have also got to remind people that the EU does not swallow up national identities. On the contrary, people have multiple identities: you can be a Londoner, English, British and a European all at the same time.

I think some of the people who are voting for extremist parties struggle with the idea of multiple identities, and I believe that is a very important idea.

What issues do you think will be central for the European population in the upcoming elections? How do you and your political group ALDE address them?

Coming out of the worst recession since the 1930s, which has now lasted for five to six years, growth, competitiveness, and jobs have got to be the top priorities. And I mentioned the other issues – crime fighting and the environment.

The EU has a lot of challenges; top of the list is going to be the economic challenges, investment in infrastructure for future growth, research funding, innovation, and a common energy policy as well. It is the lack of a common energy policy which is framing Europe’s response to the crisis in Crimea because too many member states are dependent on Russian gas.

We need to liberate ourselves, which is where Turkey is also important because it can play a key role in the transit for gas from Azerbaijan, Iran, and Iraq. We need alternative supplies of gas and Turkey obviously sits on the link there between the EU and the potential gas-supplying countries.

Lately, we have seen some worrying developments in Turkey, in particular concerning the separation of powers and the freedom of speech. How do you judge the current state of EU-Turkey relations? How do you see the future of Turkey’s accession process?

I have always been strongly supportive of Turkey’s eventual accession to the EU, but there is no doubt that what has happened, particularly in the last year, has been of immense concern.

The way that the Gezi Park protests were handled and the authoritarian reactions that we have seen under Prime Minister Erdogan are of profound concern to Europeans like myself who are supportive of the Turkish accession process. What is going on in Turkey is profoundly worrying in terms of a liberal democratic transparent state.

So at the moment I do not quite know where we are going to end up because Turkey is moving away from meeting the criteria for EU accession, the Copenhagen criteria, and not towards them.

I would make a distinction between my desire, which I still have, of Turkey acceding to the EU, and what is currently happening inside the institutions and authorities in Turkey, which is not to be confused.

What role does Cyprus play in this respect?

I have always been very supportive of close links culturally and economically with Northern Cyprus and Turkey. And I am glad to see that business is taking the lead.

There was a declaration from Greek-Cypriot and Turkish-Cypriot businesses a while ago about the need for a peace agreement in Cyprus that is so desperately needed and would unlock other things.

There was an opportunity which was very badly missed a decade ago, and that was to make Turkish an official language of the EU because obviously it is one of the constitutional languages in Cyprus. Instead, they nominated Greek which is already catered for.

Nominating Turkish would have sent such a massive signal that the Turkish language was part of the heritage of the EU.

Yes, indeed. Speaking particularly of the UK, we know that we have benefitted hugely from migration within the EU, and it is a no-brainer in terms of how much London has benefitted culturally, socially, and economically from migration. Migrants bring energy and often do bring entrepreneurial flair in investment, which is job-creating and extremely important.

The other aspect, obviously, is that we have got challenges, in particular affordable housing, school places, making sure people can speak English – the usual issues surrounding migration. But the overall balance is extremely positive. And I think migrant businesses are a fantastic contribution to Europe, including the UK.

Business plays a very important role in the social glue that can make a society prosper. As we have seen in the debate of the UK membership of the European Union, the Confederation of British Industries has actually been quite outspoken.

Firms in Britain, big companies, have been speaking out about the importance of British membership of the EU. So, it is business actually that plays a very important role in the public debate.

Single Market
It enables EU citizens with “four freedoms”: free movement of people, goods, services and capital in all 28 Member States. (Similar to Internal Market)
ALDE
Group of the Alliance of Liberals and Democrats for Europe
Gezi Park protests
Name given to the huge wave of demonstrations in Turkey from May until September 2013 in reactions to a decision made to replace the Gezi, in central Istanbul, by an unpopular project involving notably the construction of a shopping-mall. Protests against the ruling government quickly spread all around the country.
New European (Parliamentary calendar)
The annual calendar of the European Parliament, where you can find all the voting sessions and various meetings the Members of the European Parliament must attend. Click here to have a look at the 2013 calendar.
New European (New Europeans)
People with a migrant background, who live and work in a European country and, in most cases, do not intend to go back to their country of origin. Their future is, rather, in Europe
MEP
Member of the European Parliament. The MEPs are your representatives at the EU level. They adopt EU legislations and the budget. You elect them for a period of 5 years. The next election is in May 2014.
Eurosceptics
Those who criticize the European Union (EU) as being too bureaucratic and/or undemocratic, or even not viable. Some of them actually strongly oppose the deepening and widening of the EU.
UNITEE
UNITEE represents entrepreneurs and business professionals with a migrant background, most of them of Turkish descent, and whom we refer to as ‘New Europeans’. http://www.unitee.eu/