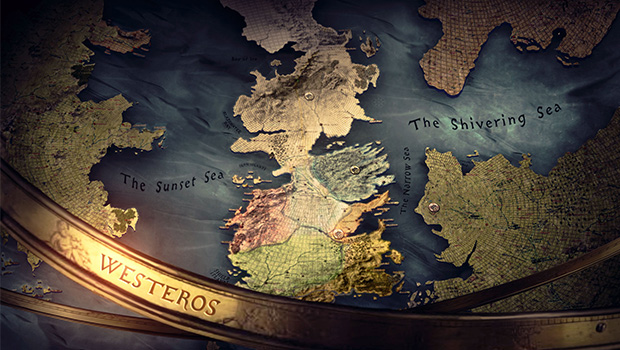 Published on November 8th, 2014 | by Laura BAEYENS | Credit: Art of the Title

(Warning: This article may contain spoilers!)

The European Union was built by its founding fathers on the values of democracy, equality, human rights, liberty, the rule of law, and most especially peace and unity. The Union is the European dream. But are these values being translated into reality in contemporary Europe?

With the rise of Euroscepticism and distrust to the EU Institutions, the European dream could slowly turn into a nightmare. A dark, cold world without the Union is unimaginable for many firm believers of Europe. Indeed, winter is coming, a winter that could last for many years to come.

Westeros, the main continent in Game of Thrones (GoT) where the seven kingdoms lie and most of the storyline takes place, have interesting similarities to the current state of the EU and its 28 Member States. Being one of the most popular television series today, the epic fantasy world of GoT created by American novelist George R. R. Martin in his series of books A Song of Ice and Fire may be fictional but in turn reflect certain aspects of European society: from politics, the economy, to culture.

Thus, UNITEE attempts to metaphorically explain how the European Union is exactly like Westeros through utilising the respective continents’ key Member States/Kingdoms and cities.

King’s Landing is the capital and the heart of Westeros where the king sits on the infamous “Iron Throne”. Brussels is the unofficial but often regarded capital of Europe. Why? Simple: it is where you will find the “Iron Throne”, a.k.a. the EU Institutions. It is the major seat of political power for the EU where nearly all important decisions are made, with the exception of the European Parliament’s Strasbourg plenary from time to time of course.

The Crownlands is a rich kingdom at the centre of Westeros where most of the key players and families in King’s Landing have come from or have ruled in: The Targaryens, the Baratheons, and the Lannisters. Some of the widely-known former and current presidents of the EU Institutions often come from the BeNeLux area, as well as from neighbouring Germany. Also, their geographic proximity to the Iron Throne is a noteworthy coincidence.

The Westerlands is a also a rich kingdom where the wealthiest and most influential family in Westeros, the Lannisters, come from. The family provides the biggest amount of money and resources to the continent. “A Lannister always pays his debts”. Germany has the biggest GDP share in the Euro-area economy. Plus, the country’s Chancellor, Angela Merkel, is sometimes regarded as the most powerful leader in the EU, with her homebase in Berlin, the Lannisters’ Casterly Rock.

Aside from the very obvious geographic and climatic similarity, The North and Scandinavian countries’ Denmark, Finland and Sweden have a deeper connection. Despite the harsh weather conditions, the people of the North in both worlds are regarded as the “peaceful” regions of both continents where their inhabitants are genuinely content and are doing economically well despite the challenging landscape.

The Riverlands and the Stormlands are perfectly situated near bodies of water. Despite being the centres of trade and the major sites of entry to Westeros, they are regarded as some of the poorest kingdoms in Westeros. Mediterranean countries such as Portugal, Spain, Greece and Italy are important trade and entry countries, but have also suffered the most when the financial crisis hit Europe and are still trying to recover from it.

The Reach is a powerful kingdom and a fertile, flamboyant land. Its inhabitants are known to love the finer things in life such as wine, dolce vita so to speak. France and Italy are known as the leading centres for art, culture and fashion that cater to an ideal lifestyle that people vie for in all corners of the globe.

The Vale is an exceptional kingdom in Westeros. This mountainous region remains “neutral” and stays out of politics and conflicts in the continent, although it actively engages in trade with other kingdoms. The equally mountainous Switzerland may be enclosed in Europe but is not part of the EU, although it is an important economic and trade partner of the EU.

Essos is the other continent in the world of Game of Thrones, east of Westeros. With the expansion of Daenerys Targaryen’s reign in this area with her dragons and army of freed slaves, the continent is a growing threat to King’s Landing and the entire Westeros. With the TTIP, growing economies in Asia, and conflicts in Europe’s borders, the EU is under threat in all corners, pinned down to the wall of possible economic and political collapse.

The Wall is what separates Westeros from the unknown lands up north and the frightening creatures that live there, such as giants and white walkers (zombies) who seem to grow stronger during harsh weather. This infrastructure made of ice is the only thing that protects the continent from attacks by the people who live Beyond the Wall, the “wildlings”. This wall is guarded by a handful of men collectively called the Night’s Watch. They are Westeros’ last hope, especially now that very long winters are coming to the continent.

The European Dream is the massive yet weakening wall of the European Union, with the number of Eurosceptics rapidly increasing in several European countries. It is up to the active believers from different aspects of EU society, the Night’s Watch of this Union, to pave the way to a stronger European trust, mindset and identity. For now, brace yourselves, for a harsh and long winter is definitely coming.

BeNeLux
This is the popular acronym for neighbouring countries’ Belgium, The Netherlands, and Luxembourg
GDP
GDP estimates are commonly used to measure the economic performance of a whole country or region, but can also measure the relative contribution of an industry sector.
TTIP
The Transatlantic Trade and Investment Partnership (TTIP) is a proposed free trade agreement between the European Union and the United States.
Eurosceptics
Those who criticize the European Union (EU) as being too bureaucratic and/or undemocratic, or even not viable. Some of them actually strongly oppose the deepening and widening of the EU.
UNITEE
UNITEE represents entrepreneurs and business professionals with a migrant background, most of them of Turkish descent, and whom we refer to as ‘New Europeans’. http://www.unitee.eu/