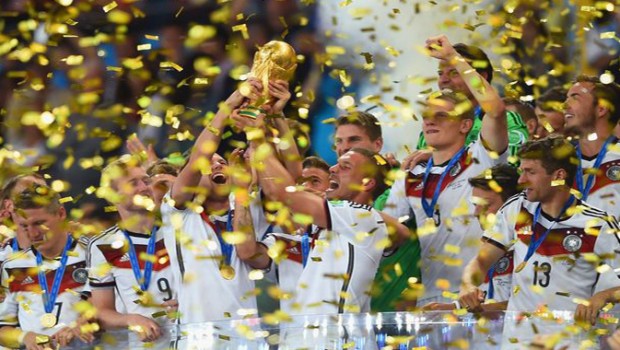 Last Sunday, Germany won the 2014 edition of the FIFA World Cup in Brazil, beating Argentina 1-0. It is the third time in a row a European team wins the tournament, after the victories of Italy (2006) and Spain (2010). And this is a triumph not only Germans are happy to celebrate.

In fact, people all over Europe tend to find new favourite teams once their national ones get eliminated from the Cup.

This is the case of Portugal, England, France or, of course, the two former winners already mentioned. But how does this work? What are, generally, the alternative choices depending on each fan’s own nationality?

There is a certain trend that should not be ignored: Europeans tend to support other European teams over other continent’s national selections.

Therefore, the Netherlands received more public support when it faced Brazil last Saturday and, in the same line, most Europeans preferred Germany to beat Argentina in the World Cup’s final.

The New York Times has published a report in which the evolution of fan loyalty during the competition can be clearly seen.

According to it, most European countries participating in the World Cup were supporting another European team once their own was eliminated. And, in the last round, all of them preferred Germany to win, with only two exceptions: Italy and Greece.

France, Belgium and Bosnia and Herzegovina supported Germany, not just during the final match, but also in all matches ever since they got eliminated.

On the other hand, it is interesting to see how ancient links with other continents prevail in the case of specific nations.

For example, the United Kingdom supported the United States in the round of 16, Spain cheered for Latin American countries such as Chile, Colombia and Argentina during the second and third rounds; and Portugal wanted Brazil to win ever since they got eliminated up to the semi-finals. But not in the final match.

“I am, first, Portuguese. Then, I am European. Therefore, I want Germany to win”. Reasoning like this was widespread last weekend, and even the European Parliament showed its support for Germany via Facebook, with a post saying “Viel Glück to Germany in the World Cup! Don’t forget to root for a European victory”.

Can an event like the World Cup foster a European identity, effectively? It, no doubt, triggers transnational solidarity and mutual support amongst nations in Europe, as people from neighbouring countries decide to support each other once they are out of the game themselves.

If the international exchanges promoted by the Erasmus programme have benefited the feeling of belonging to Europe, sports may also constitute an alternative way to fortify European identities and to strengthen their mutual identity.