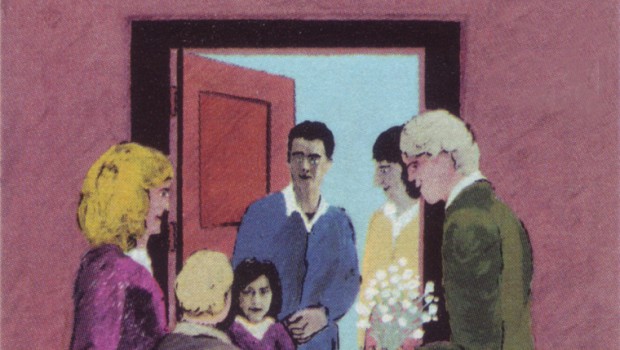 On a busy market square in Gothenburg, Sweden, in early October, a man flagged a placard above the heads of the crowd. He was not shopping for fruit or vegetables, like his fellow market goers, but instead he was on the lookout for an immigrant family to introduce to his own family.

“We live so separated.” he told the Swedish newspaper Göteborgs-Posten. “We live in a bubble. My children go to a school with almost only Swedish children and we live in an area where there are very few immigrants.”

On a Friday afternoon, Paul Eneroth, 48, decided to take matters into his own hands. He went down to the basement and created a sign with a photo of his family underneath, and the next day he went to the busy Kviberg market, a popular weekend destination for many migrants and Swedes alike. Among fruit, electronics, clothes and international cuisine of all types, he flagged his placard at the market, among curious and interested on-lookers.

This is an attempt by the father of three, Paul Eneroth, to introduce to his children, something that he highly appreciated in his youth: the perspectives of people from a different background than his own. In the 90’s Paul was a volunteer, offering a helping hand for many newly arrived, and often alone, young immigrants.

“It was incredibly fun and we used to, among other thing, go out dancing together.” Paul told Göteborgs-Posten. ”But now I have a family so therefore I want to meet a family instead, with similar aged children. I want to give this to my kids. I might be naive but perhaps you have to let the naive win over reasoning. It is important in precisely these questions.”

His aim is to enrich the lives of his family, and especially his children. He believes that spending time together with a family of a migrant background, going for dinner, to the cinema, or having a coffee, would be beneficial and fun for both families. Many people at the market have already shared Paul enthusiasm for the initiative, and Paul and his family have already received several phone numbers from interested and curious families. He has also given his own number to a couple of people.

According to Paul Eneroth, the city of Gothenburg is too segregated.

“A lot of it is because of how the city is built and there is a lot that could be done there. We live very close, but never meet anyways. What I am doing may be a small thing but I am still encouraging others to do something instead of going on about what the reason is for this segregation. “

Sweden has often been considered a model for integration policies. According to the Migration Integration Policy Index, which measures levels of integration in Europe, in certain key areas such as education, political participation and labour market mobility, Sweden has scored higher than most other European countries. Integration policies in Sweden have a multicultural approach that is aimed to increase and celebrate diversity in society and on the labour market. The past year, however, integration policies have been increasingly questioned, also as a result of the eruption of violence in the immigrant rich suburb of Husby in Stockholm, in May 2013.  Paul Eneroth is presenting a personal approach to tackle some of these issues and further integration in his home city of Gothenburg.