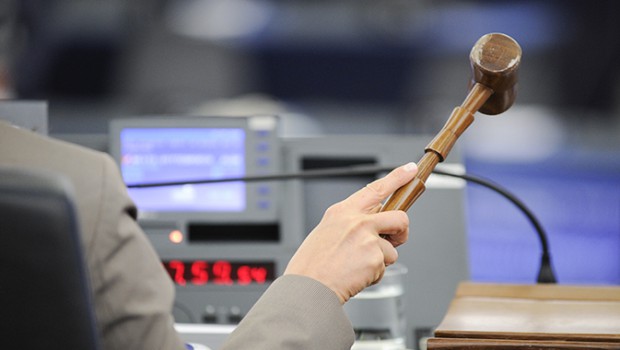 The European Union (EU). Four different institutions, many different exertions of influence and one law-making process.

The European Council sets the general political direction. However, it does not have the power to pass laws. The European Council‘s meetings are essentially summits, where Heads of State or Government of every EU country meet to decide on broad political priorities and major initiatives.

The actual law-making procedure involves the other three main institutions: the European Parliament, the European Commission and, finally, the Council of the EU. All together, these three bodies produce European policies and laws, through the “Ordinary Legislative Procedure” (ex “co-decision”).

So the Commission proposes new laws, and then the Parliament and the Council of the European Union adopt them.

The European citizens directly elect the European Parliament every 5 years. As you know, your next opportunity to vote will be in spring 2014!

We, the people of Europe, can then decide which candidates will become Members of the European Parliament, “MEPs” as we call them in Brussels’ jargon.

Our institutions showed off their power in the negotiations concerning the EU’s next long-term budget for 2014–2020. Only after months of tough negotiations by the leaders of the Parliament, the Council and the Commission, the Parliament agreed to pass the final vote in the plenary this autumn.

Last but not least, the Council of the European Union also plays an important role in the law-making procedure. Consisting of the Ministers of the national governments, it gives them the chance to defend their national interest at EU level.

Once a law is passed by the Parliament and the Council of the EU, the Commission and the Member States implement it. It is the job of the Commission to ensure that the laws are properly implemented and respected.

Did you know?: Up to 39% of national legislation is influenced by EU laws!

Council of the European Union
The Council is the EU institution where the Member States' government representatives sit, i.e. the ministers of each Member State with responsibility for a given area. It is one of the two branches of the legislative branch of the Union, the other being the Parliament. Its Presidency rotates every six months among the governments of EU member states.
Ordinary legislative procedure (Eligible expenditure)
The money that is allowed to be used to meet objectives set out in a political party’s programme: meetings and conferences, publications, studies, administrative, personnel or travel costs and any campaign costs connected to the electoral campaign.
Ordinary legislative procedure (Co-decision procedure)
When both the European Parliament and the Council of the EU have to approve the European Commission’s proposals for them to become EU law. With the Lisbon Treaty (2009), it has become the standard way of decision-making, giving the European Parliament much more power!