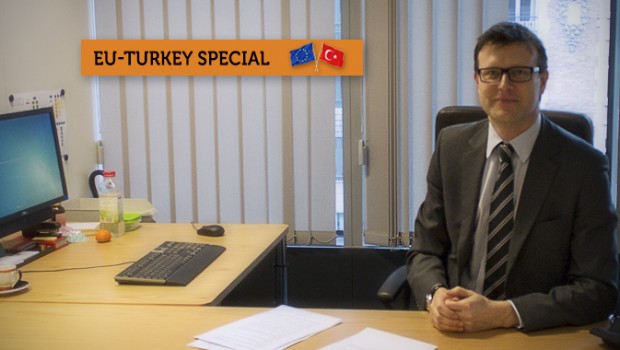 Do you know the EU has its own foreign ministry and diplomatic corps? It is the European External Action Service (EEAS). We interviewed Giles Portman, Turkey Adviser to the EEAS, to learn more about how the EU and Turkey cooperate internationally. He has more than ten years’ experience in EU-Turkey relations, and previously worked for the UK Foreign Service; most recently, as the Deputy Head of Mission in Ankara.

What is the exact role of the EEAS in EU-Turkey relations?

Whereas the Commission and DG Enlargement lead the accession negotiations and Turkey’s obligations to align with the acquis communautaire, the EEAS focuses on foreign policy cooperation with Turkey.

What are the main areas of cooperation in foreign policy between Turkey and the EU, and what is the added value of Turkey for the EU foreign policy?

One main area has been Syria. The Middle East-North Africa region is the key focus for us. In regard to Syria, Turkey plays a key role, not only in supporting the opposition and trying to help to find a political solution, but also in humanitarian support.

In that region, the EEAS leads on the nuclear negotiation with Iran, and Turkey has played a very supportive role hosting meetings but, also, giving its very strong political support to the process.

Concerning Afghanistan, Turkey holds its own Afghanistan-Pakistan process. It has its summit every year. It plays an important leading role in trying to encourage confidence-building measures and in building greater security and prosperity in Afghanistan.

When the EU carries out security or peace-building missions around the world, it invites other countries to join, and Turkey is one of the biggest contributors. So, for example, it contributed to the police-training mission in the West Bank, and now we are talking about joining missions in Libya, Mali and the Central African Republic.

What kind of support are we talking about?

It is about providing people or equipment, passing on experience through training, and so on. Whether it is police, security training or improved border management, Turkey is one of the most important non-EU contributors.

What have the effects of the crisis in Syria been for the EU-Turkey relations?

Cooperation is increasing. Now, we are all focusing on finding a political solution, and Turkey’s support for the opposition, as well as trying to get more coordination, has been very important. Turkey is hosting about 700.000 people that had to flee Syria, and they spend around two billion dollars; thus, they play a vital role there.

A third area is extremism. There is growing evidence that people are going to Syria to fight for terrorist groups. They pose a threat to Turkey, but also to EU Member States, so we work on this together. We are having expert-level meetings now, both in Brussels and Turkey, to try and identify ways we can share information and cooperate better against that threat.

Concerning humanitarian aid, do you think Turkey might feel a little left alone dealing with the Syrian refugees?

They certainly make that point. Turkey has made an amazing effort that puts a strain on local resources, accommodation, jobs, hospitals and schools.

When we take a look at the big picture though, the EU is the biggest contributor in dealing with the humanitarian crisis. It spends well over two billion euros, but it has to be dedicated where it is most needed, and the really desperate situations are elsewhere. Nevertheless, we have provided 40 million euros of support to Turkey.

The “Zero Problem Policy” with neighbouring countries of Turkish Foreign Minister Davutoglu lost much of its content in recent years. How do you think, Ankara will deal with its direct neighbours in the coming years?

Turkey’s policy was very laudable. Who could disagree with not having problems with your neighbours? But, when your neighbours begin to disintegrate and fight internally, like it is happening in Syria, you cannot have zero problems, you have to take sides.

Cyprus, for example, is a country which Turkey does not recognise, and has had problems with for decades. However, in the last couple of weeks settlement talks restarted, and Turkey played a very positive role in helping to achieve the joint declaration. It is making a concrete contribution to trying to solve that problem, and it should be applauded for that.

With Armenia, Turkey does not have relations. We are now running a two million euro confidence-building measure project to encourage more communication between Turkish and Armenia’s civil society; that is a real priority.

Turkey has made efforts to improve ties with Iran and Iraq, with some high level visits in both directions, and we support these efforts.

Egypt is a country where we think the relationship should be improved.

And, finally, Israel, where ties have basically been frozen since the Mavi Marmara incident. We understand now that the two sides are very close to agreeing on a compensation for the families of the victims that would lead the way to Ambassadors returning to the two countries and proper diplomatic relations being restored.

Turkey is in a very difficult neighbourhood, in unprecedentedly difficult times, but it is making efforts with Cyprus, Israel, with all of its neighbours really, and we support that.

To what extent will Ankara benefit from the improvement of Iran’s relations with the international community?

It is absolutely about benefits, especially about security. The questions of Iran’s nuclear capabilities have caused a lot of concerns. But now we have a process led by Baroness Ashton. Solving the problem would lead to the gradual lifting of sanctions on Iran, freeing up Turkey’s economic ties with it. That would be a big trade and energy benefit.

What would be the added value for the EU of an energetically stronger Turkey?

Turkey and the EU are resource-poor. Green energy is an important factor there. Turkey is two things: it is a vital energy corridor for the EU but, as its economy grows so successfully, it also risks becoming an increasing polluter. So, it certainly has massive extra potential in renewable energy.

In terms of Turkey’s potential as a gas and oil corridor to Europe, the southern corridor is developing, and the route from Azerbaijan through Turkey to the EU is becoming clearer.

If you look at the EU-Turkey economic relationship, we are completely bound together. 40% of Turkey’s trade is with the EU, which represents over 70% of its foreign direct investment. We are not going anywhere, we are neighbours, and anything we can do to develop that relationship, including through closer energy cooperation, is great for both of us.