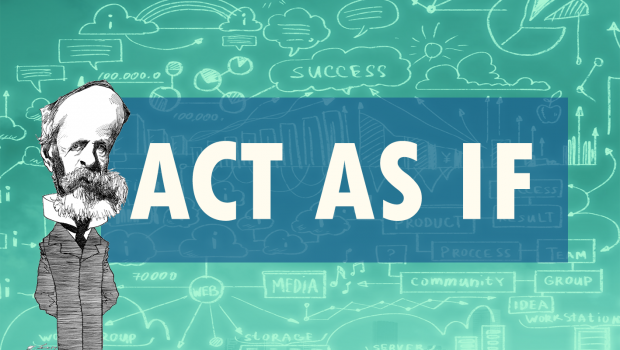 Everything started with an article about Becca Brown, this American mid-30s woman quitted her perfect job on Wall Street to launch her personal business.

After having graduated from Columbia Business School, Becca began to work at Goldman Sachs on Wall Street. Eight years later, she decided to leave the well-known bank to found Solemates, a line of women’s shoe-care products. Her company is a real success and her main products are available in more than 3 000 stores worldwide.

Becca reveals that the most important piece of advice she received was: “Act as if”. Actually, entrepreneurs, in order to overcome the main challenges when starting a company, have to change their state of mind and act as if – it did not faze you, you are confident and things had gone in your way.

The “Act as if” principle was popularized more than 100 years ago by William James, an American philosopher, who emphasized that these three words create motivation to do things that people are reluctant to do. He also emphasized that actions guide emotions, not necessarily the other way around, so if you laugh, you will be happy. This principle helps people not only to change their mindset but it can also change their physical appearance, help them to perform new behaviours or acquire specific skills. This state of mind can also boost their participation to activities and their openness to the world. Altogether, the “Act as if” principle allows people to change their life with ambitious perspectives.

Some of the most well-known “act as if’s” are to smile to become measurably happier, to nod while speaking to become more persuasive and to appear confident to start a business.

Indeed, the efforts to transform an idea into a success story are important but more importantly is the change in the self-image. Entrepreneurs and business professionals need to visualise themselves acting in the way that their ideal self would behave.

Thus, “Act as if what you do makes a difference. It does.” – William James.

You are welcome to comment  how this principle helped you to achieve something or how it can help you in the future!