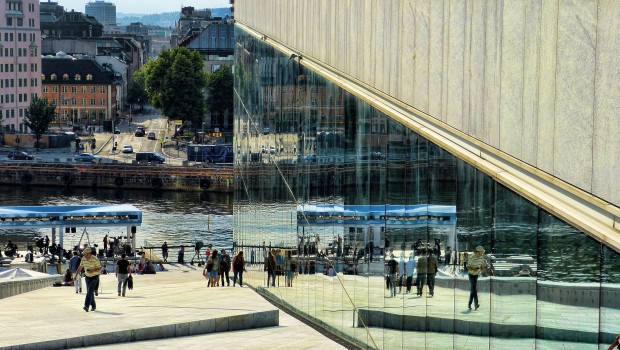 While many cities in Scandinavia and Europe are struggling with integration and diversity policies, those of the city of Oslo succeed. The city is open to diversity’s opportunities. The city’s OXLO brand means Oslo Extra Large. The political message is that the city shall be a structure of opportunities, extra-large, accommodating newcomers and their inherent diversity.

Oslo, the capital of Norway, is a city with 634 000 inhabitants. It has been, by tradition, a city of migration for Norwegians from the rest of the country, and more recently, from the Nordic neighbours and Europe, and the world beyond.

Oslo Extra Large is embedded in the City Charter “Oslo – a city for all”, adopted by the City Council in 2001. The Charter states that all citizens are equals, no matter their ethnical, cultural or religious backgrounds. They all have the same basic rights, duties and responsibilities. In 2013, the City Government renewed its commitment to diversity: the City Council’s decision on “Diversity’s opportunities – on OXLO, Oslo Extra Large”, made the principles of the European Charter for Integrating Cities the basis for integration and diversity work in Oslo.

Jobs and the opportunity to earn a living draw migrants to Oslo. In 2013, some 20.000 people migrated there, mainly from Europe. Half of them came for work, one in eight came to study, and most of the others joined a husband or a wife. Today, some 30 % of the population in Oslo has a diverse ethnic background. One in two among youth and children is an immigrant, or has got a parent or a grandparent who migrated to Norway. Most of them work in the urban city economy, providing the citizens with food, health, entertainment and transportation. The young of foreign-born background with higher education are working in the fields of culture and sports, research and hi-tech companies, and are visible in media and public debate. Ethnic minorities’ participation in political Parties and representation in the City Council is high: 16 of 59 of the representatives – 27 % – in the Council have a migrant/colourful cultural background.

The story of OXLO and Oslo as an intercultural city is closely linked to values intrinsic to the Norwegian society and to the development of a welfare state, internationally known as the Scandinavian model. While the city is open to new ideas and new people, diversity in terms of language, ethnicity, culture and religion require commitment to common values such as democracy, equality and individual liberty. In Oslo, this complies with three basic values, related with equality:

– Equal treatment of all, regardless of social backgrounds and financial situations.

– Equal opportunities and social mobility engineered by your own efforts.

Family and gender roles in the population with a migrant background are changing. Over time and across generations, income, education and family patterns are becoming similar to the ethnic Norwegian majority. Young women with a diverse background take part in education and in employment, and they marry and have children later than their mothers.

The foreign-born population, though, has higher proportions of families and individuals in a vulnerable economic situation than the rest of the population. Too few immigrant women participate in the labour market. The number of minority pupils failing in at school is still too high. Differences in education, employment and family patterns among young adults of diverse origins, are small. Migrant youth with higher education are as likely as majority youth to find a job as majority youth.

The City Government of the Norwegian capital has made integration and diversity its key elements. Urban society is understood as a structure of opportunities and the city manages integration through governance and partnerships that optimise the freedom of choice, based on common interests with the business community and the civil society.

Integration requires innovation and adaption, and the city acknowledges the need for leadership and urban development. Ethnic equality is best promoted through measures that motivate minorities to make use of their resources and realise their potential. OXLO new policy exchanges and the welfare policy approach with a business development approach are buttressed by a very practical view on equality and human rights.

This understanding has led to a range of initiatives involving partnerships and co-opted projects in business, culture, sports and civil society. Key stakeholders lead their own initiatives addressing the challenges inherent to diversity, and back solutions based on their personal need to engage and involve minorities.

Through the Oslo Knowledge Partnership with Oslo Universities and Colleges, the city supports the Oslo Global Talent Career Fair, opening up job opportunities for international students and academics with an intercultural background. In 2014, the city has launched its own OXLO Mentor Programme, where Master students are offered mentorship and the opportunity for short-term internship.

The campaign Born and Raised in Oslo celebrates intercultural youth in schools, sports clubs, libraries and youth clubs. As of 2012, funding has been provided for school newspapers, school and youth club twinning and cultural activities. This year, the City Government staged the first Conference on Religious Dialogue, mobilising Christian, Atheist, Muslim, Jewish, Sikh, Buddhist and Hindu congregations against fundamentalism, intolerance and rumour-mongering on the Internet.

Walking the talk, Oslo expects to introduce a new guide on delivering equal services to a diverse population by 2015, demonstrating in detail how the European Charter on Integrating Cities may be implemented in schools and kindergartens, social services and child protection, health and care for the elderly.

Oslo is very proud of its top ranking in the Council of Europe’s Intercultural City Index, and the benchmarking exercises of Eurocities’ Integrating Cities.
The City Government wants Oslo to be a city of talents, and the OXLO brand is now used as one element in the city’s international marketing, attracting international students, entrepreneurs and migrants of knowledge and competence.

The renewal of the OXLO policy demonstrates that Oslo is moving towards becoming an intercultural city with broad contacts across ethnic and religious divisions. The commitment by business, culture and voluntary organizations is Oslo’s strength as an intercultural city, and provides a solid foundation for cooperation and alliances between the municipality and other civic stakeholders.